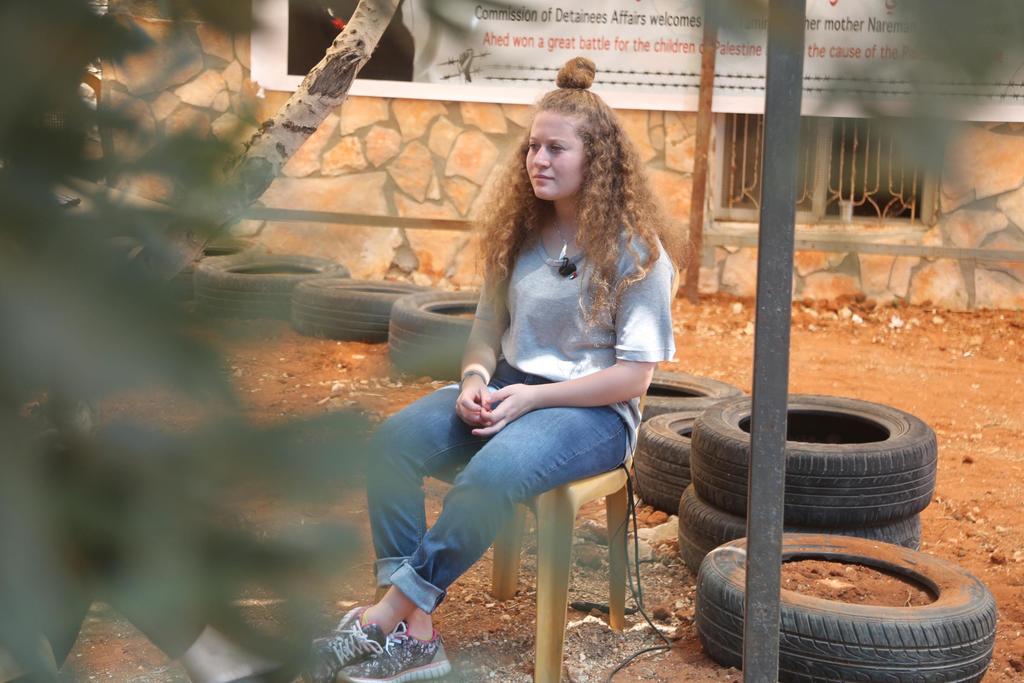 Ahed’s father Bassem Tamimi told the Anadolu Agency that the family had planned to travel to Europe via Jordan so that Ahed could speak about the Palestinian Resistance Movement and her experience of being detained in an Israeli prison. Speaking to Haaretz, Bassem explained that the family had been invited by human rights groups to attend meetings in Europe, with the trip scheduled to last 20 days and see Ahed speak in Belgium, France and Spain.

The family had planned to travel on Friday morning but they were prevented from doing so by Israeli authorities. The Tamimis were informed of the decision by Palestinian officials in the joint Israeli-Palestinian District Coordination and Liaison committee, who stressed that the decision had come from their Israeli counterparts. The paper added that “Israeli security authorities told Haaretz that Tamimi, her parents and one of her brothers is barred entry solely to Israel. However, a different security source confirmed the family’s claim and told Haaretz the decision was made by [Israeli intelligence agency] Shin Bet.”

Although Israel did not provide a reason for the travel ban, the move will be interpreted as an attempt to silence Ahed, who has gained a high profile since her arrest in December 2017. Ahed was filmed slapping an Israeli occupation soldier who trespassed on her family’s land in the village of Nabi Saleh, northwest of Ramallah in the occupied West Bank. She was held in administrative detention which was repeatedly extended before she was finally sentenced to eight months in prison by a closed Israeli military court.

Footage of the December incident went viral, prompting international interest in her case and widespread solidarity movements. Ahed’s mother Nariman, who was arrested alongside Ahed, said in August that the international interest in Ahed was “based on racism”, explaining that “frankly it is probably Ahed’s looks that prompted this worldwide solidarity […] because many Palestinian children are in Ahed’s position but weren’t treated in this way”. Ahed was released from Israeli prison in late July.

Israel has also targeted other members of the Tamimi family. In August, just a few days after Ahed’s release, her brother Waed was sentenced to 14-months’ imprisonment for alleged stone throwing. The 22-year-old had been detained by Israeli occupation forces since May over “suspected involvement in popular terror acts” and was found guilty of “participating in a violent riot.” Bassem described his son’s arrest as “an admonitory case,” explaining: “I consider this to be revenge against the whole family. Many kids in similar cases went home without charges being filed against them. If it was someone from another family I believe he would have received less time”.

Restrictions on movement and travel abroad are frequently used by Israel to punish and control Palestinians. Israeli human rights organisation B’Tselem argues that “restricting movement is one of the main tools Israel employs to enforce its regime of occupation. Israel imposes restrictions on the movement of Palestinians within the West Bank, and travel between it and the Gaza Strip, into East Jerusalem, Israel, and abroad.” Observing the Nabi Saleh checkpoint, B’Tselem highlights the presence of a watch-tower permanently staffed by Israeli soldiers, a metal gate and concrete blocks. B’Tselem also notes there is no set schedule for the Nabi Saleh checkpoint, meaning it can be opened and closed at whim by Israeli forces.

This work by Middle East Monitor is licensed under a Creative Commons Attribution-NonCommercial-ShareAlike 4.0 International License. If the image(s) bear our credit, this license also applies to them. What does that mean? For permissions beyond the scope of this license, please contact us.

"still open carry in that leftist shit store chain just to piss em off and as a bonus, Wally's…"
15 minutes ago

""Viruses are nothing, terrain is everything''....Antoine Bechamp."
45 minutes ago

It’s one thing to claim that a man can “identify” as a woman or vice versa. Increasingly we see a…See More
3 hours ago
0 Comments 0 Favorites

Less Prone commented on Chris of the family Masters's blog post The Sport Mad World
"Grown-up men waste their time energy in following games. Otherwise they could direct that it…"
3 hours ago