It's imperative that Congress immediately confirms a new Supreme Co...

Ruth Bader Ginsburg’s death didn’t just leave a vacant seat on the Supreme Court. It left a court evenly divided Supreme Court between four leftist justices and four strict constructionist justices. With his usual acumen and clarity, Ted Cruz explains why an evenly divided court is a recipe for a civil breakdown.

We can all understand the reasonableness of having an uneven number of Supreme Court justices: It substantially diminishes the likelihood of a stalemate. However, Ginsburg’s death means that, as we head into the most contentious election process in American history, the Court has eight justices. Worse, the justices are split evenly along ideological lines.

On the one side are the so conservative justices. In this context, conservative means that they believe that the Constitution as written, and as its authors intended it to be understood, must be the single-most-important document in any judicial analysis. Next in order of importance for analysis are acts of Congress, again to be interpreted as Congress intended when it passed the documents.

Regarding that last analytical metric, Justice Gorsuch failed horribly when he imputed transgenderism to the Civil Rights Act of 1964. However, despite his monumental slip-up, Gorsuch has mostly been a reliably “strict constructionist.” The other strict constructionists on the Court are Justices Thomas, Alito, and Kavanaugh.

On the other side are the justices who, like Ginsburg herself, believe that their responsibility is to achieve certain political ends that align with “justice” and “equality,” as those terms are defined in the leftist rubric. They’re the judges who, when the Constitution proves unhelpful, will look to Europe or Africa for “norms” upon which they can rely. There’s always a lot of navel-gazing going on. Their decisions are often fraudulent and almost invariably turgidly written. The leftist justices are Kagan, Sotomayor, Breyer, and Roberts.

You may be wondering why Roberts is on the list, given that he was a George W. Bush nominee. It’s true that, in matters that are inconsequential to American governance, Roberts is a reasonably conservative justice. However, on any matter that is of great moment to the left, Roberts will invariably side with the leftist justices. Nobody knows why although there are a lot of theories ranging from his being a RINO to his being blackmailed.

We already know that the fecal matter will hit the fan after this election because the Democrats have told us that it will. Unless Biden wins on election day (which he won’t), Democrats will take the matter to the streets and the courts. They’re already laying the groundwork.

Leftist legislators and judges across the country are ensuring that votes can be cast by mail and counted after the election. The voting and counting will stop only after the late-mailed, late-discovered, and late-counted ballots have pushed Biden over the top. Meanwhile, the left’s BLM and Antifa foot soldiers will be escalating the domestic terrorism we’ve witnessed over the summer.

In that chaos, imagine a stalemated Supreme Court. That’s what Sen. Cruz warned against when he spoke to Sean Hannity immediately after the news broke that Ginsburg had died:

I believe that the president should, next week, nominate a successor to the court. And I think it is critical that the Senate takes up and confirms that successor before Election Day.

And I’ll tell you one reason in particular, Sean, why it is tremendously important that, not only does the nomination happen next week, but that the confirmation happen before election day. Because Democrats and Joe Biden have made clear they intend to challenge this election. They intend to fight the legitimacy of the election. As you know, Hillary Clinton has told Joe Biden, “under no circumstances should you concede, you should challenge this election.” and we cannot have election day come and go with a 4-4 court.

A 4-4 court that is equally divided cannot decide anything. And I think we risk a constitutional crisis if we do not have a nine-justice Supreme Court, particularly when there is such a risk of a contested litigation and a contested election.

Sen. Cruz is right. It is to be hoped that people like Lisa Murkowski and Lindsey Graham, who seem squeamish about voting before the election, or Mitt Romney, who’s petty enough to destroy America to feed his ego, understand that it’s up to them to stop what could be a total civil war.

The other reason, of course, to confirm a new justice instantly is that it removes the Supreme Court as a hot-button topic in the election. The Supreme Court should be the least political branch of our government because the justices are not elected, and they serve for life. By getting a new justice seated quickly, the Court will (one hopes) recede into the background where it belongs.

(One more thing: Contrary to what Cruz says in the video below, and others are saying, there’s nothing historic about being the second female justice on the Supreme Court. The only one who matters historically is Sandra Day O’Connor, a Republican.) 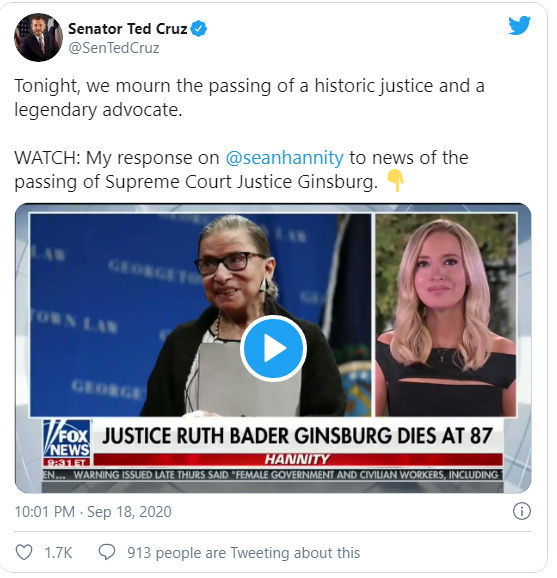 "When one is too close none, twice is nice stealing a cop car. Florida man strikes again."
37 minutes ago

Doc Vega commented on Doc Vega's blog post Rod Serling Takes Us Through a modern Version of the Twilight Zone
"Chris Thanks Buddy! "
7 hours ago

Chris of the family Masters commented on Doc Vega's blog post Rod Serling Takes Us Through a modern Version of the Twilight Zone
"It's even crazier then that! Well done Doc!"
8 hours ago

rlionhearted_3 commented on Doc Vega's blog post War With China Now imminent Thank You Biden
"It’s getting scary. Some second hand info, guy I know has a cousin in service, says,…"
10 hours ago