Kyle Rittenhaus, a 17-year-old high school student traveled to Kenosha, Wisconsin with no criminal record, legal identification, and was carrying a completely legal AR-15 Rifle with even the legal length of barrel. Kenosha, like many other Democrat run cities had been under literal siege by paid agitators hired by the Democrats who were not conducting legal protests to police brutality, once they began attacking people, burning buildings, breaking windows, and assaulting police, this so called protest had become rioting which is illegal, but as we know, in Democrat run cities no effort is made to enforce the law when it involves their narrative.

Kyle came under attack by three individuals who were wearing their typically ID concealing garb and were ANTIFA thugs. Had Rittenhaus not had his AR-15 with him the following would have happened to him. One thug was about to bash his head in with a skate board, another raised a loaded pistol to his face, and a third was there to attack as well. As it turned out Rittenhaus shot all three assailants, two were killed, and a third suffered a bullet wound to his bicep. There was nothing illegal about his self-defense. Kyle would have ended just another innocent bystander beaten and shot to death, and most likely, those responsible would have blended into the crowd of rioters and escaped. 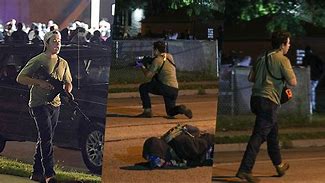 Misconduct of the press

However, when you have a media more than willing to exploit the Democrat agenda of trying to take out our First and Second Amendment rights the truth means nothing and even with camera footage that was thoroughly reviewed by the jury, there was little doubt Rittenhaus had legally defended himself. However, this made little difference to a prosecutor who sought to put an innocent young man in prison for the rest of his life. All through America we are seeing more and more justice becoming a manifestation of politics and not simply right and wrong. If Rittenhaus had been found guilty you would see the rapid deterioration of the 2nd Amendment as well as the go ahead signal to BLM, ANTIFA, and the left to begin a rampage of violence against all they view as obstructions in their quest to destroy your Constitutional Rights and your redress against attackers if you are caught out in the open during a city riot that involves some twisted agenda of the Democrats and the left.

What this means to you

How does this become relevant to those seeking employment opportunities and the right to work? If your employer thinks they can pick and choose between employees because of any political leaning they have or they prefer “Woke“ choices for personnel, where does that leave a Republican voter, a conservative, a Christian, or those who don’t approve of such issues as legalized abortion? No employer should be able to exercise that kind of bias, but it is indeed in place and being subtly utilized when we have employers making vaccination mandates to force their workers to submit to. There are personal choices and freedoms that neither the government or an employer should ever violate, but if people are properly conditioned by more and more overreach they will become the sheep who will surrender whenever called upon to do so, and that is not what American Constitutional freedom is about!

Bob Renner Thanks for your support Dude.