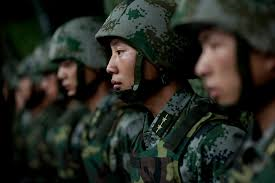 The reason that the United States remains today is that it has never seen war on its mainland. Once its enemies aim at the mainland, the enemies would have already reached Washington before its congress finishes debating and authorizes the president to declare war. But for us, we don’t waste time on these trivial things.

This is the second part of this series which describe the genocidal intentions that the Chinese toward America and this part establishes the Chinese intention to takeover America and use that leverage to get the rest of the world to capitulate to Chinese authority. Part One can be accessed here. Part One established the fact that the CCP intends to commit genocide against America before fully occupying the country. Information from this CCP speech given by defense Minister of Defense is shared here with an analysis.

At this point, I don't trust any of them. Of course, we know lots of countries are trying to get out from under the zios, and they'd destroy us to get it done.

I don't think for one minute China has ever been our ally. There isn't one country on earth that wouldn't take over America if they could, that's a no brainer. They threatened to take us down financially, they may have that capability, I don't know.

They've used our tax dollars to destroy country after country, millions daily paid to Israel daily for war and protection. We're part of Babylon, there's a price for that.

It must be True, because Alex Jones says so...

damn Chinese Mafia's fookin up the world... Dang, I've been wrong this whole time, who'd a thunk it???

lolz, ....spread that shizn on somebody elses toast Zio-shill Jones, ur idiotic following are the only morons falling for that distraction & mis-direction blowhard...

"Now we know that a woman can also be a dick. This is the progress they force on us."
11 hours ago