One of the most ethereal truths ever spoken about the cloyed "War on Drugs."  Its just that simple folks; there is no need for the bedizenment and masquerade. Nino Brown(site New Jack City) just told you in thirty-four seconds, who to pin point for the ills of drug addiction...yes, your corrupt government. I'm tired of seeing jail as a panacea for drug abuse--its not. This is a societal, habitual, and acerbic ill, carried out by avaricious bureaucrats. There is more than the bottom line involved though, the mechanisms of eugenics and gentrification are at work here as well. Some people look at cocaine users, crack users, and drug addicts in general, as the wretched of the earth, as our media would so eloquently put it. But, to prove that addiction to a harmful substance always has an underlying cause...let's view Sigmund Freud shall we. Sigmund Freud was a renowned psychologist, medical doctor, influential thinker, and the father of psychoanalysis. In lieu of all his accomplishments, let's focus on Freud's depression bout. When Freud would get bouts of depression, he would treat it with cocaine--yes, cocaine. Freud is noted for saying that cocaine gave him a feeling of ""exhilaration and lasting euphoria, which is in no way differs from the normal euphoria of the healthy person. . . You perceive an increase in self-control and possess more vitality and capacity for work. . . . In other words, you are simply more normal, and it is soon hard to believe that you are under the influence of a drug."(Quoted in Ernest Jones, *The Life and Work of Sigmund Freud, Vol. 1...) That  lasting euphoria that Freud speaks of is--9/10 times--the coping mechanism for constant dispair. 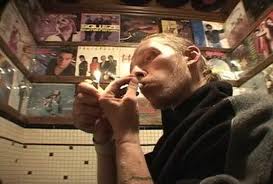 Now, getting back to this eugenics/gentrification initiative. More people are leaving the big cities than ever before.(Census: Americans leave big cities) Washington D.C, Chicago, New York, Philadelphia: all of them have seen an acute decline in population...why is that....well, as a Nation of God and Earth member once told me, "you either build or destroy." At one point in time, all these cities were major drug hubs. New York is infamous for drug lords such as Nicky Barnes, Frank Lucas,Fat Cat Nichols, Washington D.C is infamous for Rayful Edmond, Philadelphia is infamous for The Black Mafia Family, and Chicago is infamous for the Black P Stones(still think it was a COINTELL Pro set-up). In 1990, when the crack epidemic was reaching its peak, it was estimated that 7.1% of murders were homicide related.(http://www.druglibrary.org/schaffer/library/graphs/12.htm.) The War on Drugs, as a whole, has cost the US--including medical treatment, added welfare costs,federal prison construction,cost of goods stolen--approximately 400 billion dollars.(http://www.druglibrary.org/schaffer/library/graphs/17.htm.) Wait...there's more:80% of property seizures for drugs are ever convicted or charged with a crime...that's interesting isn't it?(http://www.druglibrary.org/schaffer/library/graphs/22.htm) Finally, this next fact really gives credence to the law enforcement dogma that police should only go after the big fish: 83% of asset seizures are worth $50,000 or more.(http://www.druglibrary.org/schaffer/library/graphs/23.htm) So, these tyrants only seize assets over 50 grand, spend 400 billion on a "drug war", and take property for reason...that sounds like all around theft if you ask me.Since, in recent years, the destruction has subsided a little--or has it--the architects(pun intended) have decided to rebuild the cities, thus, raising the standard of living, and raising the rent at the same time. May I ask a question ladies & gentlemen: Would you rather salivate over the fact that Brooklyn is getting its first professional sports team since 1958, or watch project buildings get bulldozed? I know my answer.

The main...well, unless you have been living under a rock, you know who controls the drug trade:the CIA. Hence, the CIA(since the use of drug use comes up in every form of political/economical debate) is a big reason for some individuals political, economic, and racial views. It used to be common to think that crack was an inner-city black issue and cocaine was a white collar drug, but now we see its a cosmic disease! Its as much a lower class problem, as it is an upper class problem. The CIA and DEA weave a web of deception that some are either too dense or incredulous to understand. The drugs users are not vermin, they are a product of their environment, which was created deliberately. Nothing is ever extemporaneous! Theodore Roosevelt once stated, "I wish very much that the wrong people could be prevented entirely from breeding; and when the evil nature of these people is sufficiently flagrant, this should be done. Criminals should be sterilized and feebleminded persons forbidden to leave offspring behind them... The emphasis should be laid on getting desirable people to breed." I think the drugging of society by the DEA and CIA is purposely and slowly achieving that goal. In closing, love yourself, love each other, and be compassionate to those who the establishment considers feebleminded persons. No man or woman--no matter how virtuous, how wealthy, or intelligent--is above another.

Comment by Cryptocurrency on November 5, 2011 at 2:32pm
... "No uzi's made in Harlem." Probably not but they can make some wild sh*t in Harlem regardless lol. How about them Globe Trotters...

Comment by Nikki on November 5, 2011 at 12:27pm
Thank you Justin...and Nino Brown.  My grandfather used to tell me how he witnessed the drug war being created.  When he was young, marijuana was just another leaf sold at the tobacco shop and nobody thought anything about it.  Opiates and a number of now illegal medications were available in pharmacies without a prescription.  Most did not abuse them because they were considered medications and doctors would recommend them to treat specific ailments.  When he was older and began to see people getting years in prison for a joint, he would get so angry and would say the world is going insane.

The Georgia Bureau of Investigation released video of the moment the explosion happened and a car seen shortly after near the scene.
4 minutes ago
0 Comments 0 Favorites