Looks like “Obama-care” Is in full swing….in Europe Elderly patients are being 'deprived of food and drink so they die quicker and free up bed space', claim doctors 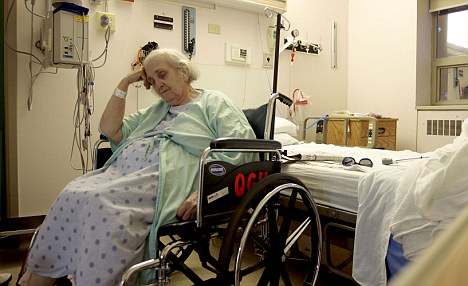 Warning: Hospitals may be withholding food and drink from elderly patients so they die quicker to cut costs and save on bad spaces (file picture)

Hospitals may be withholding food and drink from elderly patients so they die quicker to cut costs and save on bad spaces, leading doctors have warned.

Thousands of terminally ill people are placed on a 'care pathway' every year to hasten the ends of their lives.

But in a letter to the Daily Telegraph, six doctors who specialise in elderly care said hospitals across the UK could be using the controversial practice to ease the pressure on resources.

The practise is backed by the Department of Health.

But the six experts told the Daily Telegraph that in the elderly, natural death was more often free of pain and distress.

The group warned that not all doctors were acquiring the correct consent from patients and are failing to ask about what they wanted while they were still able to decide. 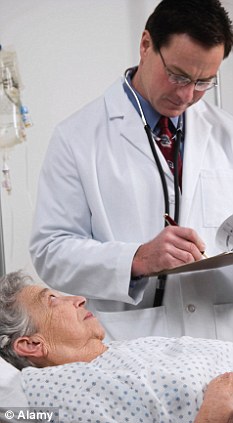 The doctors say that this has led to an increase in patients carrying a card stating that they do not want this 'pathway' treatment in the last days of their lives.

One of the letter's signatories, Dr Gillian Craig, a retired geriatrician and former vice-chairman of the Medical Ethics Alliance, told the newspaper: 'If you are cynical about it, as I am, you can see it as a cost-cutting measure, if you don't want your beds to be filled with old people.'

A Department of Health spokesman said: 'People coming to the end of their lives should have a right to high quality, compassionate and dignified care.

'The Liverpool Care Pathway (LCP) is not about saving money. It is an established and respected tool that is recommended by NICE (National Institute for Health and Clinical Excellence) and has overwhelming support from clinicians at home and abroad.

'The decision to use the pathway should involve patients and family members, and a patient's condition should be closely monitored.

'If, as sometimes happens, a patient improves, they are taken off the LCP and given whatever treatments best suit their new needs.

'To ensure the LCP is used properly, it is important that staff receive the appropriate training and support.'

never ever with hold water.. if your on your way out you won't want to eat anything but should always be offered anyway & water should be held to the lips until the very end .. death is not a pretty site ever but we will all die our bodies will start to shut down everything stops working  the heart is the last thing to go .. and you just stop breathing. Unless you have a disease known or pain like some cancers bone cancer is said to be painful but with morphine it can be controlled until the end .. what was there is gone the flesh stays behind but the spirit / life is passed on to somewhere else...   death should be private and there should be the utmost dignity .. even in death the body should be treated in a dignified manner until it returns to the earth..  this goes for all people no matter what your wishes are everyone get dignity..or should it doesn't cost anything

oh my, I am so sorry to hear that Itruly feel for you on your loss I know loosing a family member is so very hard anyway I lost my dad when I was 18 and my brother-in-law he was more of a friend than a brother-in-law to me.

Did they give her time to recover and she never did or did they stop the food and water quickly?

They should have done everything they could for her and time is a big factor for recovery.

thay are doing this here in the US my Aunt was sent to a nursing home after she had seizures that left her in a simi vegatation state she was awake and could smile and cry but could not move her body then I was told they stared to stop feedings and with held water and started her on morhpen drip so I got a flight and went to see her she was my favoret aunt her family said this is what she wanted we were very close she never told me that was her wishes Gee I MISS HER.

Burbia commented on KLC's group MUSICWARS
"The break down made by this YouTuber definitely deserve to be placed here in Music Wars."
11 hours ago

Parrhesia commented on Chris of the family Masters's blog post Sudden Adult Death Syndrome (SADS) is taking the world by storm
"Vax-idents and SADS, blamed on everything from climate change to Putin, but never any connection to…"
11 hours ago

Doc Vega commented on Chris of the family Masters's blog post Game Over
"One of the reasons California is in drought mode, they rerouted a fresh water river into the ocean.…"
17 hours ago