More than 20 30 dead in twin suicide bombings in Iraq. This is the first such terrorist attack in 4 years. pretty ironic that it's been 4 years since the last one eh???

The duel attacks happened at the Tayaran Square market, killing at least 32 people and injuring 110 more, Iraq’s health minister Hassan Mohammed al Tamimi announced, according to the Associated Press. Those numbers increased after Iraqi state media previously reported that the bombings killed 28 people and injured about 75 others, according to NPR.

The bombers denoted their vests as security forces pursued them. A ministry spokesperson said one of the bombers waited until after people started gathering around those who died in the first blast to detonate the second device.

"The twin terrorist bombings against the safe citizens of Baghdad at this time confirm the attempts and endeavors by dark groups to target the national needs and aspirations of the Iraqi people for a peaceful future," Iraqi President Barham Salih said in a tweet. "We stand firmly against these rogue attempts to destabilize our country."

This is the first suicide bombing in Baghdad in nearly two years, and no group has claimed responsibility yet. The attack is similar in nature to Sunni jihadi groups that carried out numerous previous attacks in Iraq.

Iraq's electricity ministry reported earlier this week that there was a coordinated attack on power lines and infrastructure, causing millions of dollars worth of damage. It is unclear if the infrastructure attack and bombings are related.

EDITOR'S NOTE: The death toll in this article has been updated following publication after more deaths were announced.

how dare they live in iraq! 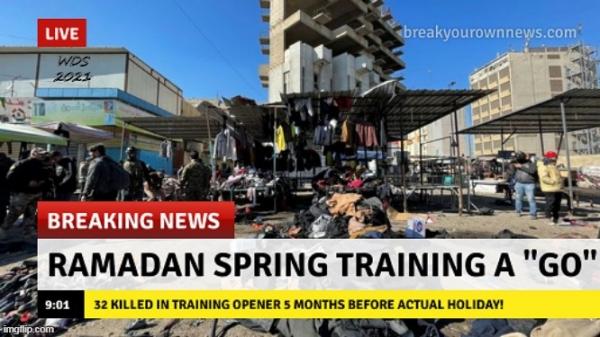