As a man who roots are entrenched in the movement--my father was apart of the New York Panthers-- i feel disgusted when people associate the New Black Panther Party with The Black Panthers. The New Black Panther Party is a movement built upon xenophobia, as was seen in the voter intimidation fiasco. For people who don't know, i came out the wound reciting Huey P. Newton quotes--the man was a genius if you ever read any writings of his..along with Fred Hampton, Angela Davis, Bobby Seale, David Hillard, H.Rap Brown, Stokley Charmichael, Afeni Shakur, and the infamous Asatta Shakur.  So, as was Tupac, i was born to aide in the struggle of all oppressed. My father taught me to be proud of who i am, my lineage and genealogy, but never--ever spite or chastise someone because their skin color. As of the age of 10, i knew of Cointelpro and J. Edgar Hoover, as he and his covert operatives eradicated some of the panthers , and others they put against each other by a method of subterfuge. 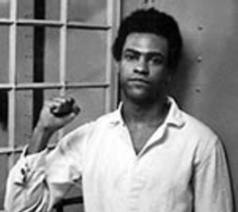 The man above me is not and will never be associated with this guy: 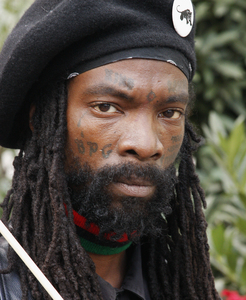 He should be ashamed of donning a panther logo.

That is not black power, its separatism, dissociation, division, exclusion, and isolation: things that the Original Black Panthers proscribed. Ever heard of these guys:

All there groups were associated with each other at some point or another to fight a common cause. We are all part of the revolution whether we know it or not. Creating divide is not going to solve the problem; neither is Dr. David Duke. While i am incredulous to the ideas of socialism, communism, fascism, capitalism, democracy, and all others, the teachings of my father and the contributions of the Black Panthers gave me a solid infrastructure to build upon and form my own ideas. The Greek tragedian Aeschylus states, "For the poison of hatred doubles near the heart burdens the one who carries the disease; he burdened with his own sorrow, and groans over seeing another's happiness."  If you are anyone you know suffers from this disease, please prescribe some truth serum to them. We have no time to be fighting amongst each other. One love folks!

it takes many to make one...well said.  i lived through that era w/panther quarters in my neighborhood on the east coast.

This song is exactly the attitude we need to convey.

Next time I head to NYC, I'll get up with you in Harlem anytime haha. The ghetto loves crazy white boys. Not crazy as in insane, but crazy as in fearless. Been there done that J. On the block in neighborhoods where every other house is abandoned with bullet holes and graffiti.

On the same token, I learned that unless you know people in I particular area of the hood stay out lol.

That's all i ask brother, now let's get back to fighting them instead of each other. Apology accepted.

It was not intended to be Black Panther Day, but numerous times i have heard about the "New Black Panthers" so i decided to set the record straight(lol). It needed to be said. I like what you have to say man, thumbs to you. We can chill in Harlem anytime kid lmao.

Comment by Justin A Horne on August 25, 2011 at 5:34pm
@ Greg: Honestly, yes. I can't have negativity in my groups. If i attacked any facet of your character, i would hope you would have expunged me from any group you made. Its the principle my friend. How do i know if i post statistics about how many black people were in prison you wouldn't say "Send em back to Africa?" I will not allow you to defile any race or gender in any of my groups i create. I'm here to fight the NWO and not my supposed teammates.

What is it black panther day or something lol??

The real enemy is the MAN lol!!! Not the ignorant crackers haha. Hey I'm a cracker so I can say it with pride. So if anyone wants to get all sensitive and nitpick my cracker... hey it's humor like that, that allowed me to fit into the inner city. I would do impressions of black preachers - funny as hell to the colored boys watching the cracker imitate a black preacher haha - it was a really good impression too!

Hey we give these words their power - "cracker" "nigga" much in the same way we give our corrupt government it's power. I don't discriminate based on color or race but, I will say in all honesty intelligence or rather lack of, whether it be emotional or intellectual, is what makes me angry with people. For example, someone getting mad at the dog for not "listening." First of all, dogs do not speak english last I checked. So who is the fool the dog for not "understanding" or the person for expecting they should? That's a really good question isn't it?

Hey I could go on and on... anyway, not the purpose of this blog, I know. I feel you Justin, I love my ghetto boys and I can tell you they never once stole anything from me, screwed me over, or set me up for anything precarious. I wish I could say the same about some of my other friends.

Black Panthers have an interesting and very courageous and revolutionary history - amazing. Thumbs up to your blog my man.

FYI anyone that feels judgmental or control freakish about my use of the word cracker, stuff it. Unless you know the culture and have been where I have been then you do not understand and never will. It was coming to peace with and accepting words like, "cracka", and "nigga" that saved my life. Now if only all of us could do that...

Oh I don't hate you because your white, nor do i agree with your "Send them back to Africa" comment. The problem i have with some constitutionalists--not all because most are really good people--is that they use the constitution as a means to debase other ethnic groups. I see it all the time! Then most of them are up in arms about rights, but black people had to wait 246 years in America to defecate in the same room as y'all. I see most patriots love Andrew Jackson, but look what he did to Native Americans in order to procure the land in the west. Let's not forget the Guatemala Syphilis experiment America conducted--forget the Tuskegee one too. As Malcolm X said: "I'm for truth, no matter who tells it. I'm for justice, no matter who it is for or against. I'm a human being, first and foremost, and as such I'm for whoever and whatever benefits humanity as a whole." The thing that would benefit humanity the most is if we all stick together. No degrading or debasing rhetoric or defiling castigation--not now, not ever. Oh and as a side bar--I don't like Obama, nor did i like any of the bush family, Clinton(sorry), Regan, Nixon, Ford, Carter, the list can go on. A little practice is of more value than a ton of preaching, all i have heard from most of the Presidents is preaching a the pulpit.  I was taught to love all people, but hold people responsible(regardless of color) for their own actions. This is exactly what i am doing to you. I can take constructive criticism, but bigotry i will not. As a people, if we work together, we will get to the promise land! I see it now, can you?

John Carpenter's THEY LIVE from 1988 was an instant classic. It was a stark warning and wake up call for humanity. Clearly, we didn't get the message.We tho...
2 hours ago
0 Comments 0 Favorites

"Yea, Zuck fucked me too, just a few truths that couldn’t be seen. 10 years on Facebook and…"
11 hours ago

fedbook deleted my pagemy profile was disabled.no way to reply to an actual person.In a Time of…See More
12 hours ago
0 Comments 0 Favorites