By Chivis Martínez for Borderland Beat 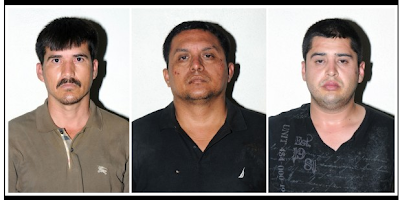 During the early hours of Monday, the leader Miguel Treviño Morales, known as “Cuarenta” or “40”, was captured by the Mexican Marines in a municipality about 27 km south west of Nuevo Laredo.....reports idicate the capo was travelling visit his infant son, said to be living adjacent to Nuevo Laredo.  Reportedly, he was making frequent trips to visit his child.
Setting  aside the unproven, sensationalistic accounts, relayed by captured narcos, and perpetuated by the media,  legends such as Miguel Treviño boiling babies, one only has to view the photos of 72 migrants slaughtered by Zetas to establish how brutal Zetas are. .. 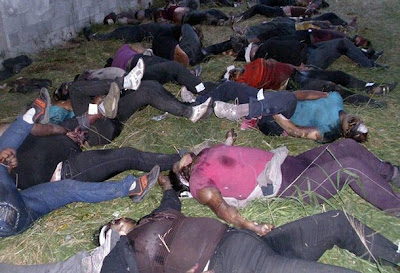 Zetas
It was Zetas that crafted a drug business diversification, by expanding into the business of human trafficking.  It is a substantial business for Zetas, who charge thousands of dollars to transport economic migrants into the US.  But the process is not so precise.
Speaking directly with economic migrants through my work with the Casa Migrantes, I have learned that the journey is prepped by assuming two things will happen.  They will be kidnapped, and females will be raped.  All migrants   prepare for the eventuality of being kidnapped, at the minimum of one time during their 2000 mile journey.  Family members prepare and await the call from narcos demanding "ransom" money.
Zetas draw from  these huge migrant pools to select recruits they deem best for narco work, or the sex industry.  The outcome for those refusing to work for the Zetas,  is depicted in the photos of the  72 slaughtered migrants whose bodies were discovered in an abandon ranch in Tamaulipas. (Above)

His criminal charges includes the authoring the kidnapping and murder of 265 migrants in San Fernando, Tamaulipas, a city 85 miles south of Brownsville Texas.  The 265 tally represent two incidents; the 72 migrants  discovered at an abandon ranch (photo above), and 193 migrants found in narco fossa.

It is because of the escape of a wounded survivor, we know what transpired at the ranch slaughter.  Through his testimony he said they were taken off a bus/truck and were killed after their refusal to work as drug mules.

It is worrisome that Miguel has a focus charge of the mass murders because "el Kilo" and his cell were responsible for carrying out the massacre and Kilo has admitted to going beyond the order of recruitment.  Nonetheless there are solid charges awaiting him in the US. 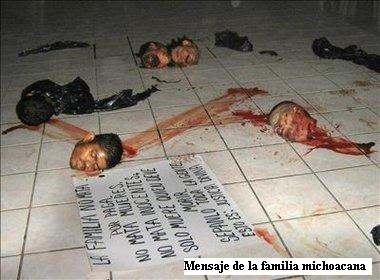 So yes they are brutal.  Yes they kill innocents.

But brutality was a part of drug war apart and long before the formation of the Zetas, and contrary to popular belief they did not initiate   the method of decapitation for the purposes of terror, it was La Familia Michoacán who shocked Mexico, in October 2006, when they tossed  5 decapitated heads on to the floor of a Michoacán disco.

The heads were accompanied by a “cartulina” (poster board with narco message) that read;
“La Familia does not kill for pay; it does not kill women or innocents. Only those who deserve to die will die. Everybody understand: this is divine justice.”

In 2006, such acts were very rare, today decapitations are so common they are not shocking to those that follow the Mexican Drug War.  Although previously rare, decapitations were a part of the cartel arsenal of terror and revenge prior to the lobbing of 5 decapitated heads in the Uruapan disco. It was the act of using multiple decapitated heads thrown into a public environment to send a message that was new.

Prior to this horrific occurrence, LFM had used decapitation to settle scores and revenge, but not to send a message.  The victims were props, either low level narco or innocents, it was never made clear.

The “Hearts and Minds of Citizens”
A defining difference between Zetas and other cartels  is that Zetas have never cultivated the hearts and minds of the people.  They simply, at the most basic level, are uninterested and uncaring what people think of them or their actions. Most cartels have the opposite agenda, with PR machines intact they espouse their work as good, in the sense they are helpers of the poor, and infirm and never would harm innocents.   This is a tactical maneuver called "pyops", that influences the value system of people, in which reality becomes shrouded.  Whereas Zetas use fear and terror as a means of control. 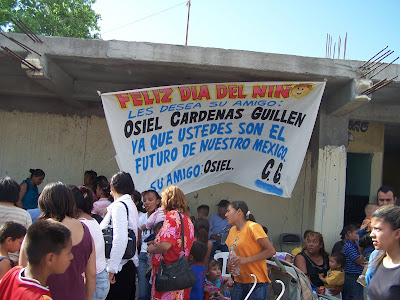 When I arrived in Coahuila a decade ago, Zetas were a presence but working as enforcers for the Golfo Cartel (CDG).  Zetas were much less overt as enforcers, taking orders from CDG’s premier leader Osiel Cardenas Guillen.
Osiel was one of those leaders who thought it important to capture the hearts and minds of the people, to gain their support.  He was fulfilling requests for medical and emergency assistance, throwing lavish parties for citizens with expensive giveaways, and celebrations at Christmas and Children’s Day (photo above).
However, behind the scenes he was ordering brutal murders, extortion and kidnappings. LFM worked for CDG as enforcers in the south.  Osiel was captured after a shootout in 2003 and imprisoned in Mexico, although he continued  commanding the cartel from behind bars.

The violence,  including decapitations by enforcers were conducted on orders given by Osiel and the other CDG leaders.  Osiel earned the  nickname of  “friend killer”,  stemming from ordering the execution of his his good friend Salvador Gómez Herrera, aka "el Chava", then the co-leader of the Golfo Cartel along with Osiel.   Osiel wanted to command solo. 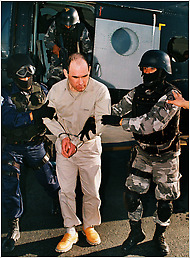 Gómez, was selected by Osiel (at left) and given the honor of being his daughters godfather.  It was shortly after driving away from the baptism party celebration, with Osiel in the vehicle, when a sicario sitting  in the backseat, fired a gunshot into the head of Gomez, blowing his brains out.
To this day many citizens think of Osiel and a kind and generous leader that would never harm innocents, or extort or kidnap.  The PR machine could not have done a better job.
His command stopped in 2007 when he was extradited to the US.  He pled guilty in a US Federal courtroom where upon the brutal fearless leader broke down and wept.  He received a 25 year sentence.
The Treviño Morales Family
Clearly, it has been a horrible year  for the Treviño Morales family. Then again 2012 wasn’t so great either.
Arcelia Morales, is the 74 year old matriarch, the woman that gave birth to all of the 13 Treviño children. 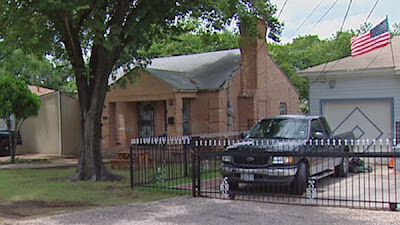 Arcelia and Rodolfo, father of the Treviño siblings, migrated to Texas from the Mexican border town of Nuevo Laredo, Tamaulipas.  The family settled in a modest Pleasant Grove neighborhood of Dallas Texas.
Where Miguel appears chronologically  in the family tree is in dispute, even by the US and Mexican Governments, his year of birth is either 1973 or 1980, although it is certain he was  born in Nuveo Laredo where the family has always maintained a home.
Arcelia continues to live in the Dallas area and Nuevo Laredo.
Miguel grew up idolizing his older brother and  the first born Treviño child, Juan Francisco.  Juan had a landscaping business in Laredo Texas.  40 worked for his brother in the business, which included servicing the properties of well-placed narcos having homes in Laredo. He was recruited by “Los Tejas” of Nuevo Laredo.
Though he began as a go-fer which included tasks such as getting lunches, and running errands  he was a fast learner, bilingual and had the ability to move between the US and Mexico freely.  With his skills he was able to rise quickly in the ranks fortified by helping his brother Juan, who had by this time gone from pulling weeds to smuggling weed.
In 1995 Juan, he was convicted of conspiracy to smuggle hundreds of pounds of marijuana into Texas through Nuevo Laredo.  Both Miguel and José were implicated in the investigation leading to the arrest of Juan; it fell short of enough to overcome the standard of reasonable doubt, so they were not charged in the case.
Juan was sentenced to 20 years in prison; he is in the Florence Federal Prison in Colorado.  His original release date was July 2013 but has been delayed for an undisclosed reason to March 2014.

cheeki kea favorited Aaron's blog post Photographed at London Gatwick Airport in 2013... That is why they need this false pandemic...
1 hour ago

cheeki kea commented on Central Scrutinizer's blog post CNA Nursing Home Whistleblower: Seniors Are DYING LIKE FLIES After COVID Injections! SPEAK OUT!!!
"Good on this brave guy who is speaking up."
1 hour ago

cheeki kea commented on Chris of the family Masters's blog post No Title
"https://www.scientificamerican.com/article/australian-lab-first-to-grow-new-virus-outside-china/…"
1 hour ago

cheeki kea commented on Chris of the family Masters's blog post No Title
"I disagree, I'm incline to believe the virus has indeed been been isolated but the truth of…"
2 hours ago

Twilight Zone replied to Twilight Zone's discussion 'Public health experts' now call for three masks to stop the spread
"Perhaps they should suggest plastic bags, worn tightly secured around our necks and get it…"
2 hours ago

Less Prone replied to Twilight Zone's discussion 'Public health experts' now call for three masks to stop the spread
"Duct tape over the nose and mouth is the ultimate weapon against the Covid-1984.."
2 hours ago

Twilight Zone commented on Less Prone's status
"All RINOs   The GOP never supported Trump, but were more than happy to beg for money…"
3 hours ago

It is the soldier, not the press who gave us Freedom of the Press

"So true, but it's the cowards who are in charge!"
4 hours ago

It is the soldier, not the press who gave us Freedom of the Press

Barry Mundy commented on CBCS's group The Dusty Cover
"Hey Jen, got your email.  It was great to hear from you."
4 hours ago

"It seems that perversion is a merit for public office in these ridiculous times. How else would you…"
6 hours ago

"Darkness has fallen"
6 hours ago