I can remember back in the 50's exactly that,still going on today. ...

Right Jim. No, no, I won't go back thousands of years of history -- though I could :-) ... just the recent past. Yes we must blind ourselves to the terrorist attack on the King David Hotel in Jerusalem , Deir Yassin, 1948, Sabra-Shatila, 1982, Gaza 2012, plus hundreds of other unprovoked attacksall over in-between (what to talk of 9/11 :-P). And we must blind ourselves to the terrorist gangs that started it all, like Irgun and the Stern Gang (who specifically targeted Jews in Europe to win support for Zionists and gave Israel most of its leadership instead of hanging them by their scrotum as they deserved. Yes, we must ignore that and pretend to be blind <wink><wink> :)

Funny thing is, history repeats and scum always continues to be scum no matter how much lipstick you put on it. 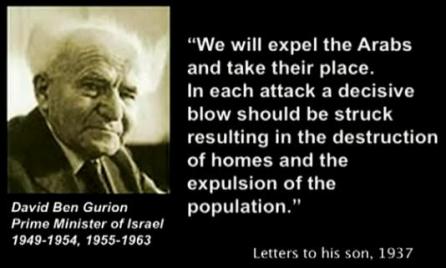 Anyways, what really makes it difficult to ignore is when Occupied Pallestine papers like Haaretz themselves claim: (Clickers Beware: If you click on any Haaretz link, you will first have to see an ad

In the 60 years since the attack at the King David Hotel, Israel has hurt some two million civilians, including 750,000 who lost their homes in 1948 and another quarter million Palestinians who were forced to leave the West Bank in the Six-Day War.

BTW: You'd be proud to know Eli isn't blowing in the wind. He is serious:

Not that we already didn't know. What I don't understand though is that:

And yet they want to hide it somehow...

Israel Warns of ‘Expansion’ as Attack Widens to Media Sites

Of course they have no issues with MSM 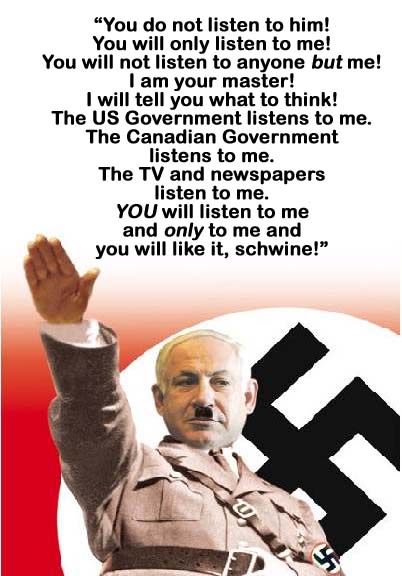 And why the silly Nethanyahoo-roadrunner pathetic fakery: 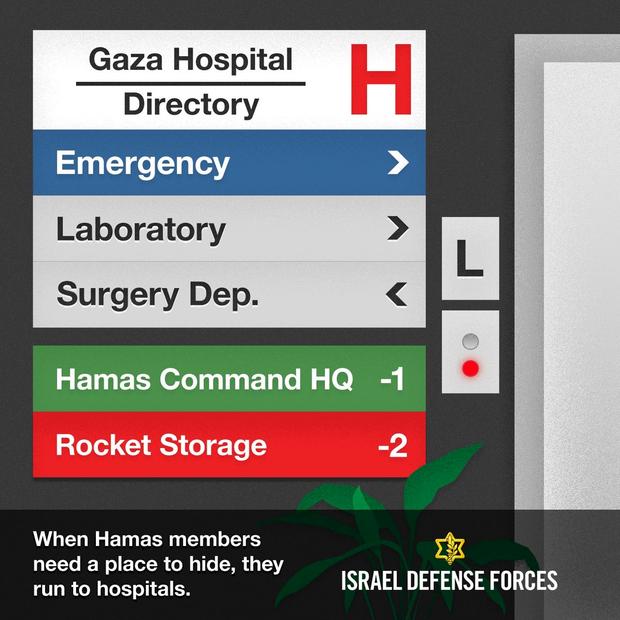 IDF wants you to believe this is a sign on the lift in a Gaza hospital. HONEST!!!! Of course Jim buys it but I still have a few neurons left ;-)

Brave Israeli Soldier Speaks Out On BBC Against the Crimes of His G...

Why Gaza must suffer again: the four guilty parties behind Israel’s...

Leaked document of 5k Israeli Officials See It Here (probably disappears by the time you see this, thanks probably to those very 5k Israeli officials ;-) )

"The nationalist not only does not disapprove of atrocities committed by his own side, but he has a remarkable capacity for not even hearing about them." -- George Orwell, English writer, 1903--1950

"A christian zionist foolishly thinks himself to be an israeli nationalist" -- Nota, 2012

"The balance of power is the scale of peace. The same balance would be preserved were all the world not destitute of arms, for all would be alike; but since some will not, others dare not lay them aside ... Horrid mischief would ensue were one half the world deprived of the use of them ... the weak will become prey to the strong." -- Thomas Paine, Thoughts on Defensive War

ON EDIT: Eweeeeee....Another terrible photoshop (is desperation setting in??): 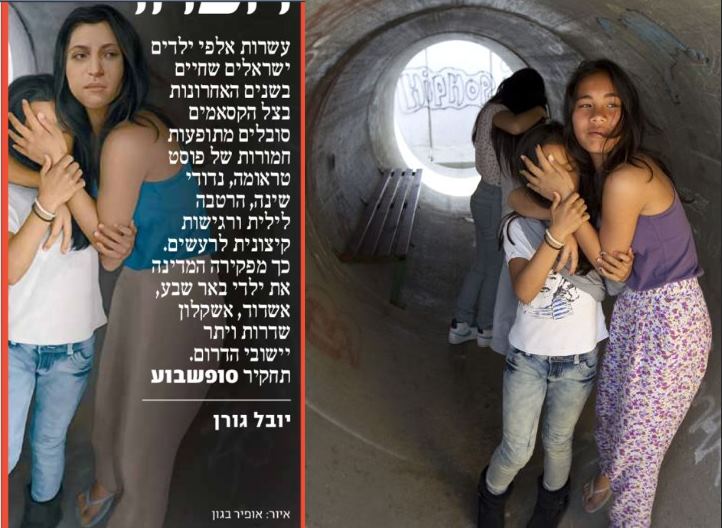 The original is on the right. Full story here. Of course the truth is somewhat different as far as "war trauma" for israeli moms, dads and kids: 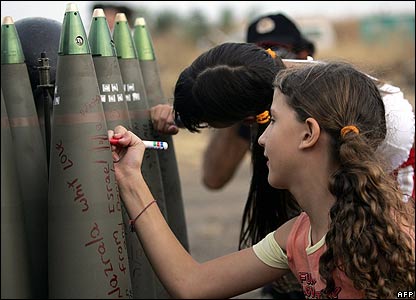 Gilad Sharon, son of former Israeli Prime Minister Ariel Sharon, wrote in the Jerusalem Post that Israel should “Flatten all of Gaza”.

“There should be no electricity in Gaza, no gasoline or moving vehicles, nothing. Then they’d really call for a ceasefire,” he wrote. “We need to flatten entire neighbourhoods in Gaza. Flatten all of Gaza. The Americans didn’t stop with Hiroshima – the Japanese weren’t surrendering fast enough, so they hit Nagasaki, too.”

Many Israelis and even some Zionists are “outraged” but the truth must be told: Sharon’s views are fully consistent with Zionism, Israeli thinking and aspect of Jewish culture.

For example, Sharon’s call is fully consistent with some devastating passages in the Old Testament:

So, as with his real father and his spiritual forefathers the young Sharon wants to destroy the Gazans, he wants to reduce them and their civilization into dust – thoughts unfortunately embedded in the Old Testament. Though religious Jews following the Talmud rather than the Torah and may be critical of literal interpretations of the holy book, Gilad Sharon is a secular Israeli and yet he follows here the most banal and literal interpretation of the biblical text.

Sharon’s views are also in line with ultra-Zionist Vladimir Jabotinsky’s “iron wall” philosophy. Jabotinsky believed that in the erection of an “iron wall” which “the native (Arab) population cannot break through”. Some would argue that by 1948 Jabotinsky’s iron wall became the backbone of Israeli political pragmatism and, though largely performed by his political enemies, the Nakba (Arabic for “catastrophe” – the dispossession and ethic cleansing of Palestinians in 1948) could be seen as the materialization of Jabotinsky’s ideology. ...(continued)

I was blind once .. all i can say is that people who say they are seeking truth will eventually run right into the WALL OF ZIONISM  ..   there is no way to avoid it and if you do not look at the evidence you will remain blind .. people look at pictures and headlines with there pre programmed views and do not look any further we are so use to visual aides we don't actually read.  Or take the time to go back into history and look at it. Never questioning the "official" stories on TV ..  When you stop and really see what is happening i don't know how people can still see Genocide as anything other than! what it is and how it is connected to the New world order and your own future ~ what they do to the least of us they will surly do to us ~great post!

"But, you know what, the blind will remain blind."

Oh, do I ever (I sort of hinted at it with that Orwell quote)! But then, when I see things like this...

...I know it has nothing to do with sight. These people are morally and ethically corrupt and born psychopathic liars born in the "synagogue of Satan!"

Note: Remember Bolton has a lot to do with encircling some one: 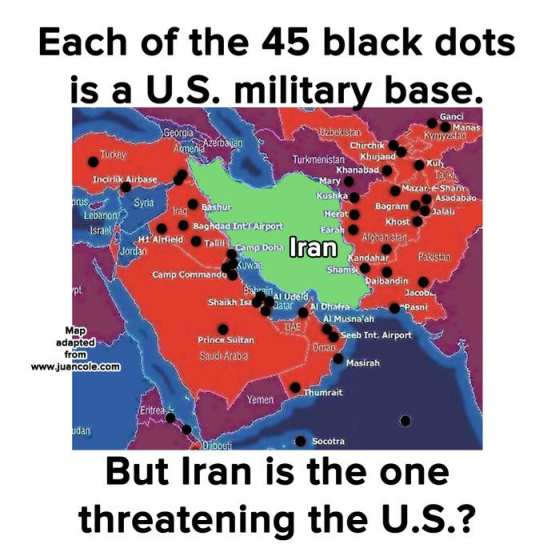 Fantastic, Nota!!! That was indeed SOME piece of work. But, you know what, the blind will remain blind.