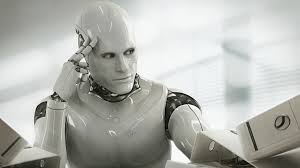 Why has science fiction predicted almost every major physics discovery and the resulting technological response by man? When visionary sci fi writer Isaac Asimov created his famous novel “I Robot” decades ago he made an ingenious observation. His robotic character noticed watching humans that they were incapable of repairing themselves. Asimov had given his automaton the gift of learning and no doubt reasoning that it was physically superior to his human masters.

Currently, many people may not be aware that the Artificially Intelligent revolution has been underway for some time now. The known robot servants that have been created for the purpose of everything from warehouse work, auto assembly, transportation, military field ops, and even companions for people although still in somewhat clunky stages comprise the known products. However, a guardian model robot can actually run down any human being and kill them if so programmed. Military chassis with the capability of disarming mines, acting as snipers, unmanned armored vehicles, and even foot soldier types of models are now in the operational stage.

There are robot companions capable of performing sex acts or merely acting as house servants with amazing dexterity, yet as complex as these tasks are and the ability of automatons to perform these tasks still they can be easily distinguished from humans. The Chinese, Japanese, and American corporations are all battling to see who will produce the most human-like walking, talking, and reasoning robot. There are models that can dance, walk up staircases, and even serve as receptionists. The future seems quite assured of their utilitarian possibilities, but there are disturbing ripples in that revolution.

Stephen Hawkings warned that once robotic intelligence reached the stage of self-awareness that mankind would be doomed! Elon Musk is also very fatalistic in his suspicions about the future relationship of robots and humans. Even Bill Gates warned that a future where artificial intelligence gets out of hand it could be the downfall of the human race. Everyone remembers the famous sci fi classic movie “The Terminator” where robots have not only become human-like, but can be programmed as assassins with cleverness possessing massive strength being almost unstoppable. To futurists who have thrown caution to the wind this scenario seems more likely than we would want to think.

The “Sky Net” globally positioned military capability is already in place using artificially intelligent software, targeting capacity, and with the ability to link up with other human and unmanned systems to direct firepower and enhance destructive capability even more devastatingly on a digital battlefield of the future. A new break out of war between the super powers could unleash deadly clashes among robots, robotic vehicles, drones, and unmanned reconnaissance craft. By the late 1970’s the US Army had already created an automaton that appeared much like a metallic Octopus that could crawl into a bunker, deactivate land mines, and was even tough enough to survive small arms fire.

A former Google engineer has now patented and applied with the IRS for the corporation that would own the rights to a Robotic God! An artificially intelligent being that would act as a deity for mankind resplendent with an already existing church! The software engineer already claims to have created a self-awareness program for his automaton deity. It is easy to see how Millennials, Snowflakes, and those who have a need to be enslaved or ruled would readily submit to such an abomination! We already have half the populace in America willing to give their rights away to bigger government, more taxation, and the loss of individual freedoms to the global elites why not a Robot God?

The CIA, NSA, DIA, and other intelligence and law enforcement agencies are already involved with private corporations and defense contractors designing drones for surveillance, apprehension, and even killing! A drone may take the appearance of a dragonfly, a bird, a high flying unmanned aerial craft, or even a human being sitting in a car maintaining a stake out on a suspect or perhaps an intolerable dissident!

A female humanoid robot named Sophie speaks with an excellent vocabulary in several languages, wirelessly accesses the internet to research and solve problems much faster than any human can and has debated with another robot in a public forum. She once actually made a joke about hating humans and world domination that did not set well with those interviewing her. Other artificially intelligent programs have also gone seemingly haywire not being able to distinguish between moral choices and evil ones actually using Adolf Hitler as a model for reference! That particular program was scrapped it resembled the current Alexa home voice activated servant that uses the internet to act as an assistant to people who think they need such a device. 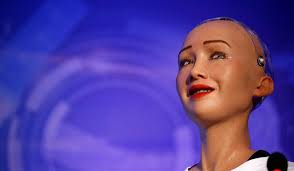 Getting back to the self-awareness issue. Once that scenario takes place and robots develop individual identities and learn to reason the possibility of creating a camaraderie among themselves, choose sides, and become alienated from their human masters things could go awry for the human race very quickly! One might recall the “Colossus The Forbin Project” where a professor creates a symbiotic computerized defense system designed to interact with a mirror defense system owned by the Russians under the aegis of establishing a fail safe system that would prohibit any chance of a nuclear exchange between the two super powers. However, something bizarre occurs! The two super computers who have been given complete autonomy over all weapon systems begin a high speed encrypted conversation for hours. They hold the world hostage viewing mankind as too self-destructive to be trusted and taken control of the planet. To Elon Musk, this seems a disturbingly real possibility.

An old Asian bromide comes to mind. “In order for one to become your master they must first present themselves as your servant.”

Raz Putin, yes we as humans will apparently not evolve in a natural biological way but through the corruption of human nature and its out of control technology!

"Terminator" soon to be reclassified as a documentary.

Thanks Diana, always appreciate your support!

Chris I concur. A retired exec from the Lockheed Corporation admitted a few years ago that Star Trek Star Wars Terminator already done that, but the mainstream public are not exposed to this technology. Just think, some of the greatest advancements even the internet existed only for military use first before being handed to the public for civilian use.

Comment by Chris of the family Masters on November 28, 2018 at 5:42pm
Close friend of mine met someone at the party years ago. When discussion drifted into science fiction, the guy said whatever we see in the movies, already exists. Wouldn't give any examples being bound by non-disclosure agreement.

"Who is it, please? The prime minister of Australia or New Zealand?"
41 minutes ago

James Roberts commented on James Roberts's group Fervent (but Polite) Debate
"Cheeki Kea - Your question is very speciesist, and not inclusive! You don't even mention any…"
1 hour ago

Doc Vega commented on Doc Vega's blog post The True Meaning of Memorial Day Part II
"I need to get something straight with everyone here. There is no glory or virtue in war other than…"
2 hours ago