They say they’ll vote ‘No.’ Republican Senators Mitt Romney of Utah, Susan Collins of Maine, and Lisa Murkowski of Alaska have emerged as early ‘red flags’ in the push to appoint a new Supreme Court justice, with the latter two senators having spoken openly of their refusal to vote for a new justice in the runup to a presidential election. Justice Ruth Bader Ginsberg died on Friday, opening up a vacancy on the court.

Collins allegedly told a New York Times reporter that she wouldn’t vote for a new SCOTUS justice in ‘October’ earlier this month. 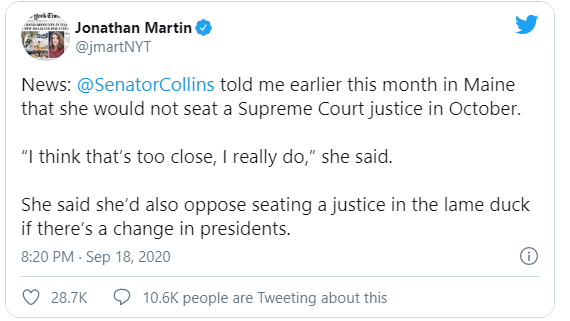 Murkowski told a reporter with Alaska Public Media that she wouldn’t vote for a new justice before the election, either.

Reports emerged on Friday night that Romney would decline to vote for a court confirmation as well, although they’re yet to be verified.

Senate Majority Leader Mitch McConnell is pledging to hold confirmation proceedings for a potential Trump Supreme Court nominee, suggesting that a nominee would receive a Senate floor vote before the election. He distinguished between the 2016 blocked nomination of Merrick Garland and the vacancy that arose from the death of Ginsberg, pointing out that a Republican President would be nominating a justice for confirmation through a Republican Senate.

It may be possible to confirm a new SCOTUS justice without the votes of the three-liberally inclined Senate Republicans, as a justice can be confirmed with 50 votes and a vice presidential tiebreaker. Other Republican Senators under the pressure of an ongoing campaign, such as Arizona’s Martha McSally, spoke in favor of the Senate having a floor vote on a tentative Trump administration SCOTUS nominee.

This could be the most heated Supreme Court confirmation process in history, and some the Senate Republican’s members have already confirmed they’re not standing with conservatives.

Roy Kruger commented on Phyllis Maka's blog post THE CYM.CARING GORP - CARING IS YOUTH YOUTH IS MONEY MONEY IS FREEDOM - C.S.Yorington, CEO and Founder of CYM - Destinations UK Labs
"Is this researched and no fake? I am curious!"
11 hours ago

Chris of the family Masters replied to MAC's discussion URGENT interview: JR Nyquist warns China pre-positioning military assets across America to ACTIVATE in effort to destroy America from within
"Chinese may argue they own US due to the trade imbalance."
11 hours ago

Chris of the family Masters favorited MAC's discussion URGENT interview: JR Nyquist warns China pre-positioning military assets across America to ACTIVATE in effort to destroy America from within
11 hours ago