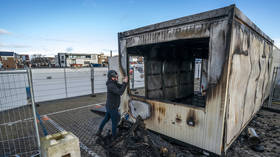 A torched drive-in coronavirus test center is pictured in the port of Urk, the Netherlands on January 24, 2021.
The Netherlands has endured its first night of curfew imposed in a bid to halt the spread of the coronavirus. The restriction was broken at multiple locations with things getting particularly hot in one town.

A group of rowdy protesters gathered in the port area of Urk, 80 kilometers (50 miles) northeast of the capital, Amsterdam overnight, shortly after the curfew went into effect at 9pm. The group was driving cars, honking horns, and waving national flags at the square, footage from the scene shows.

Update: A lot of people in the Netherlands do NOT obey the curfew. Images from #Urk where "tokkies" (sources say) are making a lot of noise. pic.twitter.com/X37Fw8xeEX

The protesters became rowdy and set a drive-in coronavirus site located at the square on fire. The group then apparently waited for police to arrive to taunt the officers and pelt them with various projectiles.

Minor scuffles between the curfew-defiant individuals and police were also observed in other parts of the town. Some protesters launched fireworks at the officers, who arrived in full riot gear and a sizeable unit of police dogs.

Riots in the Netherlands because of curfew. People in #Urk attacking the police with firework. pic.twitter.com/lQbmTYixQr

“This is not only unacceptable, but also a slap in the face, especially for the local health authority staff who do all they can at the test center to help people from Urk,” the local authorities said, promising to strictly enforce the curfew in the future.

A similar incident also unfolded in the town of Stein close to the border with Belgium. A group of around 100 young people gathered in the streets, playing music and drinking. When a sizeable police force was deployed to disperse them, scuffles ensued, resulting in at least 14 arrests.

Think your friends would be interested? Share this story!Unlike many countries worldwide, the Netherlands took a laissez-faire approach in battling the coronavirus pandemic throughout most of 2020. The situation changed in December, as cases mounted and the government turned to harsher measures, and ultimately to the first curfew since WWII.

Subscribe to BBC News www.youtube.com/bbcnewsThe BBC's David Stern explains why Ukrainian politician Vitaly Zhuravsky was thrown into a bin by a mob. He told...
16 minutes ago
0 Comments 0 Favorites

Phyllis Maka commented on Phyllis Maka's blog post WHO Insider Blows Whistle on Gates and GAVI (Video)
"Corporate government(s) trading companies illegally operating as governments, are all under the…"
3 hours ago

"If it doesn't come with free lithium batteries not buying it. "
4 hours ago

"I'll bet both of them basically contains the same crap in one way or another. It just depends…"
4 hours ago

"It did get a job in the Biden administration because it's a freak.  The most important…"
4 hours ago