I wish him luck. Putin is merely another selfish autocrat and elitist ( like T Rump). And he banned "holocaust denial" in Russia. Time for another worldview to take charge. Putin is facilitating mandatory vaccinations this autumn. F him! He's no hero. He's another Illuminati apparatchik.

The COVID-19 pandemic has unleashed a political crisis inside Russia, as the Kremlin struggles to bring the outbreak under control and address its economic fallout. With the situation exacerbated by a simultaneous steep drop in global oil prices, the Ministry of Economic Development revealed yesterday that it anticipates a decline in gross domestic product by as much as 7.5 percent this year.

President Vladimir Putin’s poll numbers have fallen to historically low levels, as social anger mounts over the conditions facing the country’s health care workers, official efforts to cover up the scale of the death toll, and the government’s failure to take any meaningful action to shield the population from the impact of mass layoffs and falling real incomes. Following the approach taken in every major country, the Kremlin “reopened” the economy more than a week ago in a reckless effort to force people back to work, even as the country’s coronavirus cases approach 380,000, the third-most diagnosed cases on the planet.

The Kremlin announced earlier this week that it will hold postponed Victory Day celebrations, which were to take place May 9 in Moscow, on June 24. The parade, which at the very least will bring thousands of soldiers to the capital city—the center of Russia’s COVID-19 outbreak—threatens a new surge in the pandemic. The government is willing to risk this, as well as the possibility of another postponement, because it needs the display of state authority, nationalist hoopla, and feeling of shared sacrifice that the commemoration of the victory over Nazi Germany in World War II generates, as a counter to the political tensions developing because of the pandemic.

As Russia’s government tries to shore up its position, Alexei Navalny, the leading spokesperson of the liberal opposition and a self-styled “anticorruption” politician, is working to capitalize on mass discontent and steer it in a right-wing direction. Through his social media accounts and the Navalny Live program—a YouTube forum where he discusses political issues—he works to present himself as a platform through which health care workers can air their grievances and specialists can challenge official data on the pandemic. 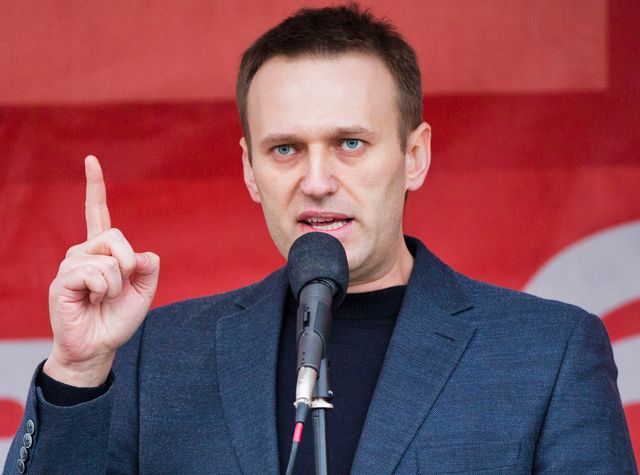 According to a late April poll by the Levada Center, Navalny’s popularity, while still low, is rising. In Moscow, he has more support than Prime Minister Mikhail Mishustin and the far-right head of the Liberal Democratic Party, Vladimir Zhirinovsky. In the country as a whole, he has a higher rating than Moscow’s mayor, Sergei Sobyanin, who has been promoted in the media as the city’s champion in the battle against COVID-19.

The material Navalny rebroadcasts on his Twitter, Facebook, and Telegram from medical workers sometimes strikes a nerve. A nurse in Saransk describes a bureaucratic nightmare of ineptitude and indifference; she and her family all came down with COVID-19 and received no help from the authorities. She was made to work despite being severely ill, and then threatened with fines for allegedly violating her quarantine when she was finally sent off to self-isolate. The nurse’s mother succumbed to the illness, a death unrecorded in COVID-19 mortality data because she also suffered from diabetes, which will be registered as the official cause of death.

Medics in Simferopol, exhausted and angry, read out a statement denouncing the government’s failure to pay them promised bonuses. Doctors seeking to expose the conditions under which they work reveal they are muzzled, fired or threatened with firing. Physicians’ publications of the names of their dead colleagues show an extremely high mortality rate for medical workers. Special place is given to videos by Leonid Volkov, a Yale-trained, right-wing ally of Navalny’s, to raise questions about the government’s questionable virus counts. The Doctor’s Alliance—a supposedly “independent” trade union founded in 2018 to tap into protests over the disastrous state of Russia’s health care system—is put forward as a force for change.

All of this is interspersed with, as is typical for Navalny, corruption revelations of different sorts. The children of top bureaucrats are receiving various government awards; former Prime Minister Dmitri Medvedev has a fancy yacht; the speaker of the Russian parliament is hiding his wealth.

As Navalny noted in a May 20 interview with Radio Free Europe/Radio Liberty, the US government-funded news outlet, “right now the degree of protest activity among citizens is probably one of the highest in recent times.” Just a few days earlier, he insisted that the opposition is fit to rule because “it needs the support of the people and the growth of that support.” Navalny is calling for a boycott or a “no” vote on proposed changes to the constitution, which Putin views as key to further consolidating power at the federal level. They are expected to be put to a popular referendum at some point in the coming months.

Despite Navalny’s efforts to present himself as an advocate for the people, his limp populism is a weak cover for a right-wing program. His “Five steps to support the citizens of Russia and its economy”—which is supposed to be an answer to the government’s miserable measures—consists of a few paltry payouts to individuals and their children, a short-term suspension of utility payments, and significant tax breaks and bailouts for small and medium-sized business. There is no indication that the business interests Navalny criticizes for their corruption would be asked to give up the tiniest fraction of their wealth. Notably absent from Navalny’s media presence is any mention of the mass COVID-19 outbreaks among oil field workers and gold miners, employed by two of Russia’s largest corporations: Gazprom and Polyus.

What stands behind the populist feint that Navalny is attempting in the midst of the coronavirus pandemic is a standard-fare, right-wing program of free markets, economic austerity, cutting taxes and red tape for corporations, the privatization of semi-state-owned enterprises, and the deepening of Russia’s bonds with global finance capital. Navalny and his entourage have extensive ties to the American state, media, and foreign policy establishment, with an examination of his political allies and advisers showing a revolving door of individuals moving from “opposition” politics in Russia to think tanks and media outlets in the US. Navalny has a long history of close involvement with far-right politics, including marching alongside Russia’s fascists and spitting vitriol about immigrants.

As evidenced by his regular promotion in the American press as a “democrat” doing battle against Putin’s despotism, Navalny has a significant level of support among forces in the United States that are at the center of the anti-Russian campaign that threatens to provoke a world war. As the Kremlin is further destabilized by the coronavirus pandemic and the spreading global economic crisis, Navalny may be increasingly pushed forward by those who view the Putin government’s control of Russia’s wealth as an intolerable limit to their own desires to exploit the Eurasian landmass and its people.

Zhirinovsky is a Jewish Zionist, by the way. While Putin often has been encircled by The Tribe™,  and described by them as belonging to them. Putin can'[t wait until they ask him to choose between Russian Christian children and his loyalty to Jewish money power. He'll choose the latter, every time.