I happen to know a thing or two about masks and safety. Why? Because for 25 years I was the editor of an award-winning trade magazine called HazMat Management that covered such topics as pollution prevention and compliance with health & safety laws. We routinely published articles on masks, gloves, respirators and other forms of personal protective equipment (PPE). Now let me tell you a few things about that mask you're wearing. And please note that what I'm about to share was also stated in the most recent edition of Del Bigtree's program The Highwire when two OSHA mask experts spoke to the fact that the kinds of masks people are wearing were never (never!) designed to be worn for long periods and doing so is very harmful.

The blue typical mask depicted in the photograph contain Teflon and other chemicals. A Facebook friend reminds us: 1. Masks are "sterilized" with Ethylene Oxide — a known carcinogen. Many teachers in various school boards have been experiencing significant symptoms as a direct result of the effects of this chemical. 2. The masks contain (not sprayed with) PTFE which makes up Teflon along with other chemicals.
I found and have posted the US patent to allow manufacturers to use PTFE as a filter in commercial masks... breathing these for extended periods can lead to lung cancer."

Don't agree? Argue with the experts at OSHA, which is the main US agency, i.e., its Occupational Health & Safety Agency. These masks are meant to be worn only for short periods, like say if you're sanding a table for an hour and don't want to inhale sawdust. They don't do anything whatsoever to stop the spread of any virus, and the emerging science of virology now understands that viruses aren't even passed person to person. I know that sounds incredible, but it's the case that the virus is in the air, you breath it in, there's no way to prevent that short of living in an oxygen tent, and if you have a strong immune system you'll be fine, and if you have a weak immune system you may have to deal with the effects of your immune system working to restore balance within your metabolism.

So let's say you don't wear the blue packaged masks, and instead wear a homemade cloth mask — the kind people wear over and over and hang on their rearview mirror and so on. Those masks are completely useless against a virus, and are also very dangerous. OSHA would never condone a person wearing a mask of this kind for anything more than the shortest time. Re-breathing your own viral debris is dangerous to health, and the oxygen deprivation children suffer wearing such masks all day will certainly cause brain damage. I'm not making this up. Again, you might say, well, Guy you're not a doctor. True, but I did edit that magazine for 25 years. That's a long time and many articles on masks and PPE. I've attended numerous OH&S conferences and listened to experts discussing these matters.

You may hear people saying that surgeons and nurses wear masks like this all day. Um, no. No they don't. They're trained in the proper use of masks, which is to wear them in the OR, then dispose of the mask when they leave that room. Are you aware that operating rooms are actually supplied extra oxygen, to compensate for the reduction in oxygen flow from mask wearing? To my mind, it's criminal (not hyperbole) to force children to wear masks all day. Setting aside the very real psychological effects, we're going to have a generation of brain damaged children. Ever heard the expression, "Not enough oxygen at birth?" That's a joke at the expense of a mentally challenged person, but that's literally what we're doing. And we're told it's to "keep us safe"! We're told this by doctors who actually don't know about PPE and laypeople who have no clue.

So, you can choose to believe me or not, but I was the editor for a quart

No link needed.  The face diaper obstructing ability to gain oxygen and the detriment to one’s health should be obvious.

Almost exactly the same as a Dr friend told me. 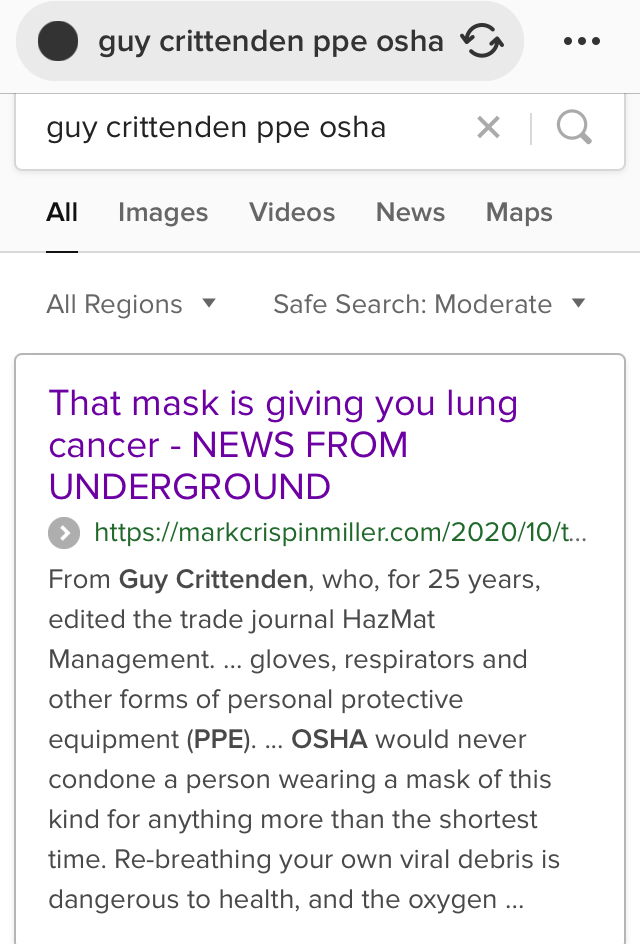 Can't do. Friend lifted it from the Fakebook for me. It looks as it is.

"Some democrat had a bright idea; "Let's take Trump's policies and form ours as total…"
54 minutes ago

"Finally it all adds up now. Why China told us they want to poke ours 'eyes' out, said…"
1 hour ago