The Race to Uncover Many Secret Truths is Unfolding

Bits and pieces of the wall keep crumbling down, but will it all happen soon enough to end the Deep State death grip on the truth? The opportunity is at hand, but at the same time, so is the prospect of a successful truth embargo imposed by our draconian out of control federal government. It would seem we have been misled for a long time and the potential of each individual to shine has also been suppressed by big government in the public classroom. There are mysteries that probably shouldn’t be mysteries like, for instance, the fact that more advanced civilizations than we ourselves live in today existed perhaps a million years ago. Were they destroyed due to war or due to cataclysmic worldwide catastrophes? There are vague archaeological clues, but still. 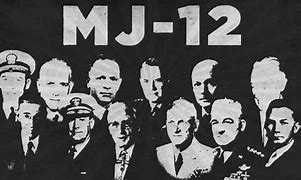 When the question of the UFO crash at Roswell came up, many skeptics opined that nothing that significant could have been hidden from the public for so many years without it leaking out, but according to the “Majestic” documents that were reviewed by the FBI and sent to the Pentagon with a recommendation that these papers were indeed authentic leaks, there would be a planned series of counterintelligence disclosures that would cause confusion rather than revealing what they were hiding.

In the late 1980’s I had a step son tell me about his uncle who while serving in the US Army at a base in Louisiana happened upon a file with photos of a crashed UFO seeming to reference the Roswell Incident. He had been intently browsing through the photos, but when an officer was heard walking down the hall to enter the headquarters office he quickly stashed the file where he’d found it. One might recall Jesse Marcel, the Major at Roswell Airfield when the crash occurred in 1947 being interviewed on a TV station in Louisiana years later in 1978. Marcel, at the time, was retired from the US Army Air Force and now an appliance repair business owner. Suffering from lung cancer, Jesse wanted to get the truth uncovered before his death. He was interviewed by the local TV news reporter. Stanton Friedman would later be alerted to that fact and a new investigation would open as a result. A number of books soon resulted. 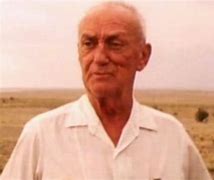 How long has this been going on?

Recently, another of those odd kinds of revelations came about on the “How to Hunt” channel on YouTube when a Sasquatch witness wrote in to say that as he wished to remain anonymous he had a profound story to tell. Having been in Special Forces and having been deployed in Iraq and Afghanistan this warrior had some eye opening testimony to reveal. He discussed what is known to the secret community as having been invited to the “Vault”, apparently the inner sanctum of our Black ops and secret military forces. While there, he was led to a special room where 110 files and books all about Sasquatch, after action reports, and apparent intelligence on their origin were detailed. He could not, for safety sake, name off the titles on the books and files but apparently many aspects of their behavior, capability, and genetic make-up were covered, but most disturbing were the “After Action” reports which are records of fire fights between Special Forces and Sasquatches. 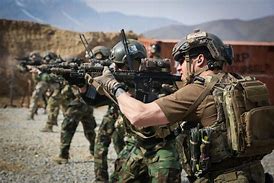 Perhaps, the man was even taking his own life in his own hands revealing what he had as there is not a form of transmission, device, or communications that are not being recorded, monitored, or identified on the planet. It doesn’t take much to establish links to people based upon time, contacts, or whereabouts in order to piece together who, what, where and when. That is the danger of our present day existence under the legalized NDAA provisions that consider all Americans to be potential detainees and domestic terrorists. For the military, even when a soldier or officer retires from active service if they do not become part of the reserve, it’s much like a criminal trying to leave organized crime, sometimes that can mean a death sentence. The boot on our necks

America has become enshrouded in the grip of a “Police State” where citizens are no longer allowed privacy or even their Constitutional Rights. Our very own elected and unelected officials have enacted a series of security state enactments that have doomed Americans into falling into the same pitfalls as was created by Nazi Germany as the society was transformed by the Brown Shirts. Just as the Soviet Union under Stalin saw the peasants as a potential threat to therefore keep underfoot, so had the US federal government re-invented itself into an abomination that contradicts everything our wise forefathers sought to extinguish from future generations of Americans, but the people failed to uphold their own freedom and entrusted it to lying and thieving politicians! From there the “Military Industrial Complex” took over.

Marcel speaks from the grave

Recently, a diary written by Jesse Marcel back in 1947 has been discovered. It had details in it never brought to public light. It reveals he extensively handled debris that he suspected were the fiber optics connection cables to an onboard computer. He experimented with the material that was light, thin, metallic, yet would not cut or burn. Jesse describes hieroglyphs and begins a code he used to hide what other factors he considers worthy of compartmentalizing. Being an intelligence officer himself involved in the A Bomb program, his writings are now being carefully reviewed and even his filmed interviews are being studied to see how his body language exhibits what he is revealing. Jesse Marcel literally became the “Fall Guy” after the announcement of the crashed disk by the 509th Bomb Group who would serve as the guy who mistakenly identified a weather balloon as an-other worldly space craft when Marcel had prepared a manual for President Truman on the weapons of the US Atomic arsenal. Once again the lies we have endured. Highly doubtful he couldn’t distinguish between a common weather balloon and a crashed alien space craft. 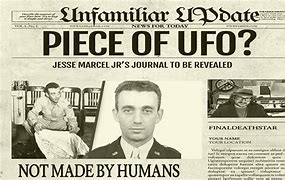