The U.S. National Security Act of 1947, the Origin of "Plausible Deniability" and the Assassination of JFK 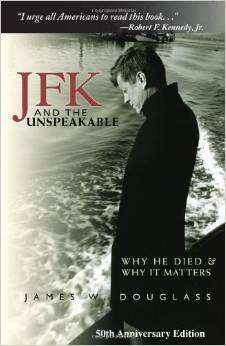 Pp.33-4: [The] United States enforced a Cold War strategy of containing the Soviet Union. The containment policy was formulated by State Department diplomat George Kennan, writing as "X" in the July 1947 Foreign Affairs. Although Kennan said the purpose of containment was more diplomatic and political than military, the Pentagon carried it out by encircling the U.S.S.R. with U.S. bases and patrolling forces.

To match the efficiency of a totalitarian enemy, U.S. military leaders urged legislation that would mobilize the nation to a state of constant readiness for war. Thus the national Security Act of 1947 laid the foundations of a national security state: the National Security Council (NSC), the National Security Resources Board (NSRB), the Munitions Board, the Research and Development Board, the Office of the Secretary of Defense, the Joint Chiefs of Staff, and the Central Intelligence Agency (CIA) [131]. Before the act was passed, Secretary of State George Marshall warned President Truman that it granted the new intelligence agency in particular powers that were "almost unlimited," [132] a criticism of the CIA that Truman would echo much too late — soon after the assassination of John Kennedy.

On June 18, 1948, Truman's National Security Council took a further step into a CIA quicksand and approved top-secret directive NSC 10/2, which sanctioned U.S. intelligence to carry out a broad range of covert operations: "propaganda, economic warfare, preventive direct action including sabotage, anti-sabotage, demolition and evacuation measures; subversion against hostile states including assistance to underground resistance movements, guerillas, and refugee liberation groups." [133] The CIA was now empowered to be a paramilitary organization. George Kennan, who sponsored NSC 10/2, said later in the light of history that it was "the greatest mistake I ever made." [134]

Since NSC 10/2 authorized violations of international law, it also established official lying as their indispensable cover. All such activities had to be "so planned and executed that any US government responsibility for them is not evident to unauthorized persons, and that if uncovered the US government can plausibly deny any responsibility for them." [135] The national security doctrine of "plausible deniability" combined lying with hypocrisy. It marked the creation of a Frankenstein monster.

Plausible deniability encouraged the autonomy of the CIA and other cover-action ("intelligence") agencies from the government that created them. In order to protect the visible authorities of the government from protest and censure, the CIA was authorized not only to violate international law but to do so with as little consultation as possible. CIA autonomy went hand in glove with plausible deniability. The less explicit an order from the president, the better it was for "plausible deniability." And the less consultation there was, the more creative CIA authorities could become in interpreting the mind of the president, especially the mind of a president so uncooperative that he wanted to splinter the CIA in a thousand pieces and scatter it to the winds.

p.227: As Lee Harvey Oswald was being set up as an individual scapegoat, so too was the Soviet Union, together with its less powerful ally, Cuba, being portrayed as the evil empire behind the president's [planned] murder. It was in fact all projection by the actual plotters, but a consciously contrived projection, artfully done for the American public. The brilliantly conceived Kennedy assasination scenario being played out, scene by deadly scene, was based on our Manichean Cold War theology. After a decade and a half of propaganda, the American public had absorbed a systematic demonizing of Communism. Atheistic Communist enemies armed with nuclear weapons were thought to constitute an absolute evil over against God and the democratic West. Against the backdrop of this dualistic theology, a beloved president seeking a just peace with the enemy could be murdered with impunity by the covert action agencies of his national security state. U.S. intelligence agencies, coordinated by the CIA, carried out the president's murder through a propaganda scenario that projected the scheme's inherent evil onto our Cold War enemies. The Soviet Union, whose leader [Krushchev] had become Kennedy's secret partner in peacemaking, was intended to be the biggest scapegoat of all.

p.234-242: [There was] a plot to assassinate the president who was prepared to negotiate an end to the Cold War, intertwined with a deeper plot to use fraudulent proof of the U.S.S.R.'s and Cuba's responsibility for that assassination so as to justify the option of preemptive [nuclear] strikes on those same two Communist nations. ...

One month after the Missile Crisis, the Joint Chiefs [of Staff] pushed for a buildup in U.S. strategic [nuclear] forces to a disarming first-strike capability. On November 20, 1962, they sent a memorandum to Secretary of Defense McNamara stating: "The Joint Chiefs of Staff consider that a first-strike capability is both feasable and desirable ..." [78]

Both then [in an NSC meeting in July 1961] and now it had become clear that a nuclear first strike meant genocide to the people attacked. Now in September 1963, the National Security Council had once again reached the point of blandly considering the killing of 140 million Soviet citizens [plus the resulting deaths of 30 million U.S. citizens] in a U.S. effort to beat their leaders to the nuclear punch. ...

When President Kennedy was murdered in late 1963, the Soviet Union had been set up as the major scapegoat in the plot. ... Those who designed the plot to kill Kennedy were familiar with the inner sanctum of our national security state. Their attempt to scapegoat the Soviets for the president's murder reflected one side of the secret struggle between JFK and his military leaders over a preemptive strike against the Soviet Union. The assassins's purpose seems to have encompassed not only killing a president determined to make peace with the enemy but also using his murder as the impetus for a possible nuclear strike against that same enemy. ...

[Editor's note: The murder of JFK was designed as a classic 'false flag' operation, but the intended scapegoating of the Soviet Union (of which the Soviets had prior knowledge) was abandoned after the assassination due to the likelihood of exposure of CIA involvement in the crime if this part of the plot had been carried forward.]

p.307: Who or what assassinated President John F. Kennedy?

In the course of experimenting in the dark truth of JFK's death, the ongoing, deepening historical hypothesis of this book has been that the CIA coordinated and carried out the president's murder. That hypothesis has been strengthened as the documents, witnesses, and converging lines of inquiry have pointed more conclusively at the CIA. Yet understanding that the CIA coordinated the assassination does not mean that we can limit the responsibility to the CIA. To tell the truth at the heart of darkness in this story, one must see and accept a responsibility that goes deeper and far beyond the Central Intelligence Agency.

The CIA was the coordinating instrument that killed the president, but the question of responsibility is more systemic, more personal, and more chilling. Thomas Merton described it rightly as the Unspeakable.

pp.xv-xvii: "The Unspeakable" is a term Thomas Merton coined at the heart of the sixties after JFK's assassination — in the midst of the escalating Vietnam War, the nuclear arms race, and the further assassinations of Malcolm X, Martin Luther King, and Robert Kennedy. In each of those soul-shaking events Merton sensed an evil whose depth and deceit seemed to go beyond the capacity of words to describe.

"One of the awful facts of our age," Merton wrote in 1965, "is the evidence that [the world] is stricken to the vary core of its being by the presence of the Unspeakable." ... It remains deeply present in our world. ...

Merton was pointing to a kind of systemic evil that defies speech. For Merton, the Unspeakable was, at bottom, a void: "It is the void that contradicts everything that is spoken even before the words are said; the void that gets into the language of public and official declarations at the very moment when they are pronounced, and makes them ring dead with the hollowness of the abyss. It is the void out of which Eichmann drew the punctilious exactitude of his obedience ..." [5]

In our Cold War history, the Unspeakable was the void in our government's covert-action doctrine of "plausible deniability," sanctioned by the June 18, 1948, National Security Council Directive 10/2. [6]. Under the direction of Allen Dulles, the CIA interpreted "plausible deniability" as a green light to assassinate national leaders, overthrow governments, and lie to cover up any trace of accountability ..."

The Unspeakable is not far away. It is not somewhere out there, identical with a government that became foreign to us. The emptiness of the void, the vacuum of responsibility and compassion, is in ourselves. Our citizen denial provides the ground for the government's doctrine of "plausible deniability." John F. Kennedy's assassination is rooted in our denial of our nation's crimes in World War II that began with the Cold War and the nuclear arms race. As a growing precedent to JFK's assassination by his own national security state, we U.S. citizens supported our government when it destroyed whole cities (Hamburg, Dresden, Tokyo, Hiroshima, Nagasaki), when it protected our Cold War security by world-destructive weapons, and when it carried out the covert murders of foreign leaders with "plausible deniability" in a way that was obvious to critical observers. By avoiding our responsibility for the escalating crimes of state done for our security, we who failed to confront the Unspeakable opened the door to JFK's assassination and its cover-up. The Unspeakable is not far away.

"And we who have failed to confront the Unspeakable are responsible for the evil that the U.S. government and its vassal states continue to inflict upon the world."

"californication says they aren't testing, who knows what…"
28 minutes ago

Chris of the family Masters posted blog posts
30 minutes ago

steve commented on stormtruther's blog post Pete Buttigieg Gives Advice to a Prepubescent 9-Year-Old Boy About How To Come Out As Gay (He also gave him his phone number )
"adidictomy(add a dick to me)surgery  foul up https://www.bitchute.com/video/P827jLXqOvc/"
1 hour ago

steve commented on stormtruther's blog post Pete Buttigieg Gives Advice to a Prepubescent 9-Year-Old Boy About How To Come Out As Gay (He also gave him his phone number )
"I don't understand how any sane person could support this peter lickin butt plugger, he…"
1 hour ago

Burbia commented on TommyD's group The Chuckle Hut
"This one really rings like a Lt. Corbis/Soph video before bannng her altogether on YouTube.It…"
4 hours ago

"Very much so. It reminds me of this unforgettable quote."
6 hours ago

cheeki kea commented on stormtruther's blog post Why Jacinda Ardern could be REMOVED as New Zealand Prime Minister as her unpopularity at home continues to grow
"Ha ha, maybe in her dreams. Well elections this year and she has promised to be true and…"
8 hours ago