By now, nearly everyone interested in healthy living is aware of the recent research linking Monsanto's GMO corn to cancer tumors and an increase risk of premature death in both men and women. But the media has not yet reported on the everyday foods being sold in grocery stores right now and made with Monsanto's genetically modified corn (GM corn).

According to the Center for Food Safety, up to 85% of the corn grown in the United States is genetically modified. This means corn-based cereals that use non-organic corn have a very high likelihood of containing GM corn.

The following list presents the top 10 popular breakfast cereals most likely to contain Monsanto's genetically modified corn. For the record, none of these cereals claim to be GMO-free, nor made with organic corn. The exact GMO content of these cereals remains a mystery precisely because manufacturers of these cereals refuse to label them with their GMO content. This lack of full disclosure by the food industry underscores the urgent need for a labeling law so that consumers can make an informed decision.

Legal note: In no way are we claiming these cereals will cause cancer tumors to grow in your body or that they pose an immediate risk to your health. Those studies have not yet been done on humans. GM corn is an experimental crop with unknown long-term effects of humans. Breakfast cereals made with GM corn may turn out to pose a significant long-term risk to human health, but that has not yet been determined. This article is presented in the public interest, reflecting reasonable caution over a common food ingredient which French scientists have now convincingly linked to cancer and premature death in studies conducted on rats. There is only one brand of breakfast cereal I know of that's 100% non-GMO and 100% organic across their entire product line. That company is Nature's Path: Add to that their plans for the future....

And then there is this comprehensive list that expands upon the one posted by suzi...SCARY!!!

suzie, might point out that it's Minute Maid, not Minute Made - not that I thought You had anything to do with the image You posted.  I don't touch ANY of those brands and haven't for YEARS.

I was surprised that Life cereal was not on the list. 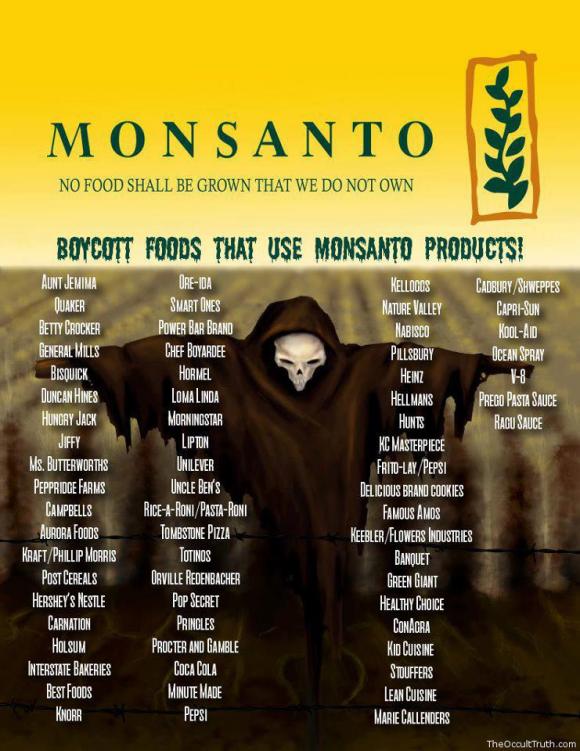 cheeki kea commented on Less Prone's blog post They Want a War - And a Big One
"yes, Ms Marin the party puppet of puke spewing out lies on distant shores. I don't know why…"
20 minutes ago

"No it's not a laugh to see Santas arse. That's not normal."
1 hour ago

"In clown world not even Santa get's an exception to escape smut and filth duties. Get's…"
1 hour ago

"In PC Clown World, drag shows and children twerking and getting tips, that's like…"
14 hours ago

Parrhesia replied to Parrhesia's discussion Flu Is Back: Experts Previously Claimed Strains Became “Extinct” During COVID
"The CDC created a new category here in the US - PIC (Pneumonia, Influenza, Covid) to hide these…"
21 hours ago

Less Prone replied to Parrhesia's discussion Flu Is Back: Experts Previously Claimed Strains Became “Extinct” During COVID
"The flu took a two year vacation, who believes that? Where did it go? Bahamas, North Pole, but now…"
21 hours ago