The deep state's support for Al-Qaeda has become so glaring that even FOX News is reporting on it, asking why would we be helping the terrorist group. 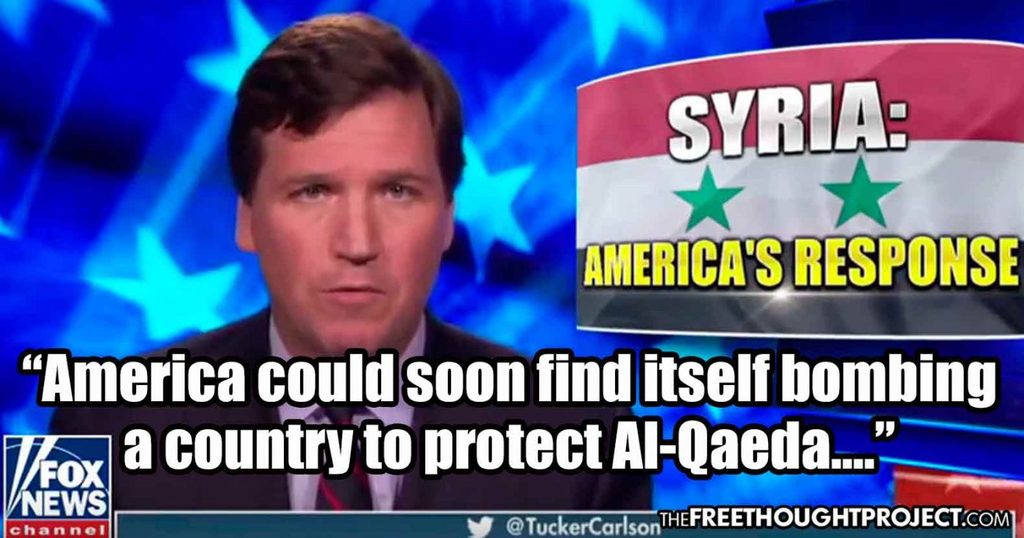 “More than 10,000 rebels in that province are believed to be aligned with Al-Qaeda. So that would mean that 17 years after 9/11, America could soon find itself bombing a country to protect Al-Qaeda sympathizers. Why would we do that?” Carlson asked.

Idlib, Syria — For those who have been paying attention, the United States military industrial complex has been ramping up conflict in Syria and another attack on the sovereign country is seemingly imminent. However, to those paying attention, these imminent attacks will only help one group — Al-Qaeda.

On Tuesday, Congress woman Tulsi Gabbard pointed out the glaring hypocrisy of the White House honoring those who were killed by Al-Qaeda during 9/11 while the US is simultaneously supporting Al-Qaeda in Idlib.

“While President Trump & VP Pence give 9/11 speeches about how much they care about the victims of al-Qaeda’s attack on our country, they are simultaneously acting as protectors of AQ in Syria/Idlib, threatening Russia and Syria that if they attack al-Qaeda, we will punish them,” Gabbard tweeted.

Showing that the push for truth knows no party, FOX News right wing pundit Tucker Carlson echoed those remarks this week when he asked why the US went from fighting Al-Qaeda to protecting them.

Tucker Carlson: More than 10k rebels in that province are believed to be allied with Al-Qaeda. So that would mean that 17 years after 9/11, America could soon find itself bombing a country to protect Al-Qaeda sympathizers. Why would we do that? #Syriapic.twitter.com/ciz6IV9v3f

The “rebels” in the Idlib region are also accused of staging false flag attacks to justify these US stirkes. For over a month, the Russian government has been warning over the possibility of false flags in the region and now its all coming to a head.

While Trump/Pence gave speeches honoring the victims of 9/11 two days ago, they are simultaneously protecting al-Qaeda and other jihadist forces in Syria; threatening Russia, Syria, and Iran with US military force if they dare attack these terrorists. pic.twitter.com/hAmOU9VKSE

A TFTP reported on Tuesday, the Russian military announced that it had intelligence that the Syrian government would be the target of said footage and claimed it would be released that day. Then, on Wednesday the Russian Reconciliation Center In Syria released a statement claiming that a number of Middle Eastern TV channels and a regional affiliate of a US broadcaster “have shot nine videos, in Jisr al-Shughur city in Idlib province, of a staged chemical attack” that will be blamed on the Syrian government.

“All the footage of the staged provocation in Jisr al-Shughur is to be delivered to the newsrooms of TV channels, which are to broadcast it after its publication on social media,” the statement claims.

All of the videos, according to the Russian government, show activists from the White Helmets group providing assistance to civilians “injured” in the non-existent attack.

As the state run media group RT reports, the Russian military details that on September 11, the White Helmets and terrorists from Tahrir al-Sham (commonly known as Al-Qaeda in Syria) held a meeting following the filming process, in which they selected two out of nine videos for future transfer to the United Nations and the Organisation for the Prohibition of Chemical Weapons (OPCW). The remaining videos are to be used for propaganda on social media networks due to the poor quality, the military claims.

Now, the US is claiming they will strike before any attack, as a means of deterring Assad from launching more chemical weapons. The logic here is absolute insanity.

Why would Assad gas his own people knowing full well that the US would use this a pretext to invade his country and eventually kill him? The answer to that question, if we apply the law of Occam’s razor, is that he wouldn’t.

The more likely answer to the question of why the US is attacking Syria and protecting Al-Qaeda is that it furthers the neoconservative interests of the deep state.

To those paying attention over the years, the deep state’s desire to intervene in Iran and Syria, and subsequent support for this in the media should come as no surprise as it has been the plan since Bill Clinton was in office and was documented in the neoconservative PNAC report. This was even admitted by General Wesley Clark, former Supreme Allied Commander of NATO, that the U.S. planned on going to war with Syria and other countries, according to a 2001 memo from the U.S. Secretary of Defense.

“This is a memo that describes how we’re going to take out seven countries in five years,” Clark said. “Starting with Iraq, and then Syria, Lebanon, Libya, Somalia, Sudan, and finishing off with Iran.”

How convenient for the deep state that Assad is now giving them a reason to attack Syria.

All presidents since Clinton have crossed countries off this list. Now it’s Trump’s turn.

Comment by Chris of the family Masters on September 14, 2018 at 8:53pm
The reason is Greater Israel.

cheeki kea commented on Central Scrutinizer's blog post Anyone remember this assklown ??
"Hi CS , Glad you made it back, it's good to see you again. You're a funny one at times."
4 minutes ago

Central Scrutinizer commented on steve's blog post It's not just O K to be WHITE it's GREEEEEEEEATTTTTTTTTTTT
"Terminator - Democrat Fail Well whatever ya do then, DO NOT, I repeat, DO NOT watch, no wait,…"
5 minutes ago

cheeki kea commented on Guardian of Scotland's status
"Good to see you back G.o.S, like-minded friend. That's a good and timely video for common…"
51 minutes ago

"looks about right, lol, yup ol monkey-boy is about to unwittingly release the Krakken on…"
1 hour ago

Mr. Sizzle commented on Chris of the family Masters's blog post American National Alert and Appeal
"@Steve Yes,  it’s called the Samson option where Israel openly states that it has…"
13 hours ago