What I Know About Warnings and Arrests

A large number of criminal networks have been uncovered both here and abroad, which have been siphoning large amounts of money out of the American economy and which have been contributing to illegal arms and drug markets, human trafficking rings, and even darker purposes, such as murder related to organ harvesting, Satanic rituals, and pedophilia.
The bunny trail has led to some of the highest offices in government and down to the local subcontractor level. The clean up began in Arkansas and is spreading outward from that initial beach head. Most likely it will hit Nevada or New Mexico next, which have similarly been hot beds of racketeering, illegal gambling, smuggling, and other criminal activities.
Arkansas, Bill Clinton's old stomping ground, was Ground Zero for the clean up operation, because so much of this corruption was connected through contacts in Arkansas or started there.
A pernicious system of "kickbacks" from the Federal level down to the local government units is apparent throughout. This system promotes racketeering and kickbacks based on racketeering and extortion.
About 70,000 indictments have been processed thus far and the number of total indictments continues to grow as more evidence surfaces and more criminals turn on their compatriots and provide evidence against them. Nobody knows how many people will eventually be indicted by so-called Operation Clean Sweep, but it could easily go over 100,000.
Some of these cases will be tried by military courts because the persons and activities fall under that jurisdiction. Others will be tried by civilian courts.
People can expect to see some famous names in the line-ups and will be shocked by scope and ferocity of these criminals.
The best thing for us to do during the "rodeo" is to stay at home and off the streets. Just hunker down and let the police and military units assigned do their jobs.
Children and pets need to be kept under close supervision.
It's highly recommended that you pick up extra prescription medications you might need during the next month.
Every effort has been and is being made to assure the continuation of utility services, but it can't hurt to have extra food, extra water, and a "camp potty"--- a five gallon bucket with a toilet seat and lid on it, ready to go, if needed.
The idea is to be ready to just stay home for a week to ten days and not go anywhere. Be ready in the event that the lights go out or the local grocery store closes.
And other than that, be psychologically ready, as much as you can be, for the sight of military units guarding public buildings and people ---even well-known people--- being arrested and accused of heinous crimes.
This is not a Kodak Moment in our country's history, but it is a necessary effort to put an end to institutionalized crime.
Once the roll-up starts, nobody knows how long it will take to meet the primary objectives, but the best estimates I have heard are a week to ten days. That may be optimistic, but gives at least a reasonable parameter to plan for.
I advocate everyone being ready for at least a couple weeks of shut down at all times, simply because I have lived through two disasters already --- a wild fire and an earthquake -- and know the score.
The time to plan is BEFORE you actually need extra food, water, blankets, a do-it-yourself toilet, prescription refills, heat, and some means to cook food and boil water. If you have those emergency needs provided for and have your emergency plan in place, it will be a lot less stressful when and if you need to deploy and actually make use of these provisions.
So far as I know, the indictments are real and will be enforced, which gives rise to the reasonable expectation that at least in some places and for some period of time, it will be desirable for Americans to find a seat and stay home.
Better to plan for that and not need to do it, than to need extra supplies and to not have them on hand.

Be prepared anyway regardless if this is real or not. We are living in a volatile environment with no guarantees.

As the flag says: 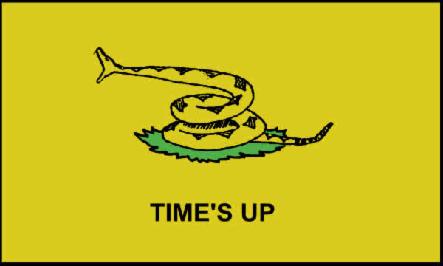 "Now look what you've done Stuff-up fuck-up. ~May your national demise be our wondrous Rise.…"
25 minutes ago

MAC replied to MAC's discussion Putin's Chilling Message to the West at the 10th Moscow Conference on International Security
"Putin the right man in the right place at the right time, stomping the nwo asshat country's…"
2 hours ago

"Ol trumpy bear is a damn good salesman/circus barker if nothing else. He could sell ice to eskimos…"
3 hours ago

steve commented on Less Prone's blog post The provocation is getting worse: Finland and Estonia are planning to set up a missile system to block Russia's Baltic fleet
"These cowardly prix think the distraction of war will save their scrawny necks come just desserts…"
3 hours ago

steve commented on Doc Vega's blog post This is What Happens When You Abandon Your Allies in Afghanistan
"Hey Parr, or in the delusional mind of our weepy poet Hey Alter or invented ego or supporter or…"
8 hours ago