The Third Jihad is an in-depth documentary film that exposes the war the media is not telling you about. It reveals the enemy our government is too afraid to...

The True "Global Axis of Evil" is the US/Israel coalition!!!!!

Glad you see it like that, Less Prone. It's quite unfortunate otherwise to hear and see people totally sold to this manufactured threat of Islamic Terrorism and Muslims to America and Americans. The first step in fighting one's enemy is to know who the real enemy is. However, it seems, in case of most Americans, they have already lost the fight against their enemy simply because they have failed to identify their enemy correctly. All this while the blindly-propaganda-believing Americans have just wasted time fighting the wrong people, while the real enemy grew more and more powerful and today controls most aspects of their day to day life.

Thank you, DTOM. Actually, I have been expecting a deluge of brickbats to be coming my way soon in the form of counter comments. So, actually, it's nice to know that someone actually read my comments and found them appreciable. Thanks again!! :)

You're right Ria, it's propaganda and lies. Muslims are no threat to the US. Enemies are within the own borders.

Excellent evaluation Ria - kudos to you!

Some accurate insights, not partial twisted misinformation aimed at inciting hatred and repulsion.

Sometime back CNN had published an article entitled Study: Threat of Muslim-American terrorism in U.S. exaggerated; according to a study released by Duke University and the University of North Carolina at Chapel Hill, “the terrorist threat posed by radicalized Muslim-Americans has been exaggerated.” 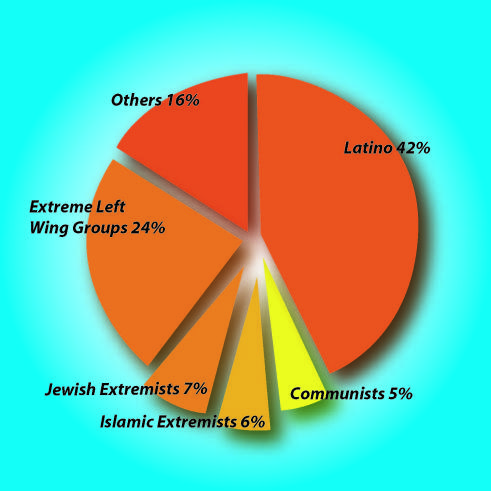 Yet notice the disparity in media coverage between the two.  It would indeed be very interesting to construct a corresponding pie chart that depicted the level of media coverage of each group.  The reason that Muslim apologists and their “leftist dhimmi allies” cannot recall another non-Islamic act of terrorism other than Waco is due to the fact that the media gives menial (if any) coverage to such events.  If a terrorist attack does not fit the “Islam is the perennial and existential threat of our times” narrative, it is simply not paid much attention to, which in a circuitous manner reinforces and “proves” the preconceived narrative.  It is to such an extent that the average American cannot remember any Jewish or Latino terrorist; why should he when he has never even heard of the Jewish Defense League or the Ejercito Popular Boricua Macheteros?  Surely what he does not know does not exist! Isn't it?

The Islamophobes claim that Islam is intrinsically a terrorist religion.  The proof?  Well, just about every terrorist attack is Islamic, they retort.  Unfortunately for them, that’s not quite true.  More like six percent.  Using their defunct logic, these right wingers ought now to conclude that nearly all acts of terrorism are committed by Latinos (or Jews).  Let them dare say it…they couldn't  it would be political and social suicide to say such a thing. Most Americans would shut down such talk as bigoted; yet, similar statements continue to be said of Islam, without any repercussions.

The Islamophobes live in a fantasy world where everyone is supposedly too “politically correct” to criticize Islam and Muslims.  Yet, the reality is the exact opposite: you can get away with saying anything against the crescent.  Can you imagine the reaction if I said that Latinos should be profiled because after all they are the ones who commit the most terrorism in the country?  (For the record: I don’t believe in such profiling, because I am–unlike the right wing nutters–a believer in American ideals.)

The moral of the story is that Americans ought to calm down when it comes to Islamic terrorism.  Right wingers always live in mortal fear–or rather, they try to make you feel that way.  In fact, Pamela Geller (the queen of internet Islamophobia) literally said her mission was to “scare the bejeezus outta ya.” Don’t be fooled, and don’t be a wuss.  You don’t live in constant fear of radicalized Latinos (unless you’re Lou Dobbs), even though they commit seven times more acts of terrorism than Muslims in America.  Why then are you wetting yourself over Islamic radicals?  In the words of Cenk Uygur: you’re at a ten when you need to be at a four.  Nobody is saying that Islamic terrorism is not a matter of concern, but it’s grossly exaggerated.

The U.S. Department of Justice Report on Terrorism 2002 to 2005 also lists incidents from 1980 to 2005 and clearly shows that most terrorist incidents were not carried out by Muslims.

In Europe the number of arrests connected to terrorism doubled in the European Union in 2007, while the overwhelming majority of attacks carried out in its territory were linked to separatism, the EU’s police office, Europol, said in a report released by Europol.

The FBI has a chronological list of all terror attacks on US soil from 1980 to 2005, and - this is the important bit - only 6% of the attacks involved Islamist extremism. That means that here in the United States, a whopping 94% of known terrorists are not Muslim. Europol, the European Union’s criminal intelligence agency, posts a similar list each year entitled the “EU Terrorism Situation and Trend Report.” The numbers in Europe are there are even more stark, with terror attacks perpetrated by Muslims accounting for only 0.4% of terror plots in the EU from 2006-2008. The most recent report, when issued early next year, will include the details from this summer’s horrific attack in Norway, carried out by a man “calling for a Christian war to defend Europe against the threat of Muslim domination.”

cheeki kea commented on tjdavis's blog post Canadian Government Asissting Suicide
" Oh wow That was really said. " Trained to Eliminate those that are suicidal" Not a…"
24 minutes ago