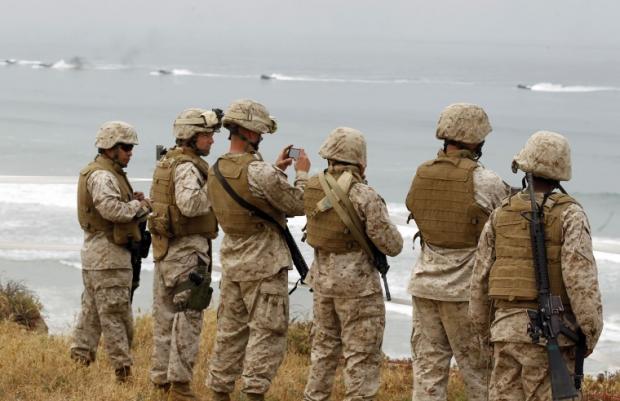 With beach landings, 25 naval ships and an air assault, the United States and eight other countries are staging a major amphibious exercise on the US East Coast this week, fighting a fictional enemy that bears more than a passing resemblance to Iran.

After a decade dominated by ground wars against insurgents in Iraq and Afghanistan, the drill dubbed Bold Alligator is "the largest amphibious exercise conducted by the fleet in the last 10 years," said Admiral John Harvey, head of US Fleet Forces Command.

About 20,000 US forces, plus hundreds of British, Dutch and French troops as well as liaison officers from Italy, Spain, New Zealand and Australia are taking part in the exercise along the Atlantic coast off Virginia and North Carolina.

An American aircraft carrier, amphibious assault ships including France's Mistral, Canadian mine sweepers and dozens of aircraft have been deployed for the drill, which began on January 30 and runs through mid-February.

Monday was "D-day" for Bold Alligator, with US Marines stepping on to the beach from hovercraft, near the Camp Lejeune base in North Carolina.

The American military, mindful that Marines have spent most of their time in the deserts of Iraq and the mountains of Afghanistan since 2001, said the goal was "to revitalize, refine, and strengthen fundamental amphibious capabilities and reinforce the Navy and Marine Corps role as 'fighters from the sea.'"

This just creeps Me out.  I wonder if there will be a false flag operation while the troops are "conveniently" practicing on Our beaches...

Now is the time to take Their power away!  End war and the need for money!  Sign the petition!

I hope they get sand in their boots.

The operation you describe is the same old same old, since WW2, we practice. Hey, wanna see more / Go to FT Bragg or Fort Benning, watch the skies. A lot of people jumping out of perfectly good airplanes, doing it since WW2. The offshore to onshore operations are an ongoing training series. The sad part of your "report", is, you think it is not normal. When you graduate from school, go serve in the U.S. Millitary. Then spout your experience instead of your fears.

WTF?? I think the peace loving citizens of America need to stage a real (live) invasion exercise of the Whit(e) House.

Good idea,plus quite a few other locations,I'm sure you agree Vincent!

That is one thing you'd think they have down to a T by now. I guess the figured they had invaded everywhere else, why not here.

"I like the clown world stuff this guy does at the end of his vids. Nothing like ending on a funny…"
4 hours ago

Parrhesia commented on tjdavis's blog post Canadian Actress Jennifer Gibson on Jabs
"She makes the connection to the jab, but "it's what we must do" so jab me…"
yesterday