Apparent Sabotage Disables Nord Stream 1 and 2, Cutting Off All Direct Gas Supply to Germany from Russia

Yesterday evening, pressure in the undersea Nord Stream 2 pipeline suddenly collapsed, and gas could be seen bubbling to the surface of the Baltic Sea near th.... Shortly afterwards, reports came of a total collapse in the pressure of our other major undersea pipeline connection to Russia, Nord Stream 1, indicating a further rupture.

Government officials assume that the damage is intentional, and the...:

Due to the timing, the fact that three separate pipelines were affected, and the severe pressure losses in Nord Stream 1, officials expect the worst. “We can no longer imagine any scenario other than a targeted attack,” said a person privy to the assessment by the federal government and federal authorities. They added: “Everything speaks against a coincidence.”

Such an attack on the seabed would be anything but trivial; it would have to be carried out with special forces – for example, by navy divers or a submarine, people informed of initial assessments said.

With regard to responsibility for the alleged attacks, two possibilities are being discussed. First, according to initial speculation, Ukrainian or Ukrainian-affiliated forces could be responsible. With the temporary shutdown of the Nord Stream pipelines, gas deliveries from Russia to Germany and Central Europe would only be possible via the Yamal pipelinje running through Poland or the Ukrainian pipeline network.

The piece that I’ve bolded is of course a lightly disguised reference to the United States or NATO. This should surprise nobody: President Biden said in early February, that in the event of a Russian invasion, “there will be no longer a Nord Stream 2, we will bring an end to it.” It’s well within the realm of possibility that such an attack would’ve been carried with the tacit approval (or even upon the request) of the Scholz government, to relieve them of political pressure to open the pipelines as the economy continues to collapse into the winter. The Greens are in government here, and Green-adjacent journalists have gone so far as to demand the dismantling of the pipelines to hurt Putin, so this too is far from crazy.

The second scenario investigators are contemplating, according to press reports, is of course a “‘false flag’ operation by Russia,” carried out to “drive up the price of gas,” “exacerbate the European energy crisis” and “fuel additional uncertainty.” Russia will surely be blamed for the attack as soon as it is confirmed, I have no doubt of that.

The pipeline attacks come as a few prominent German politicians have demanded the opening of Nord Stream 2, and the subject has attracted a growing protest movement. Neither pipeline was currently transporting gas; Gazprom cut off supply to Nord Stream 1 at the end of August, citing maintenance issues exacerbated by EU sanctions, while the Scholz government refused to certify Nord Stream 2 following its completion in November 2021.

Apparent Sabotage Disables Nord Stream 1 and 2, Cutting Off All Dir... 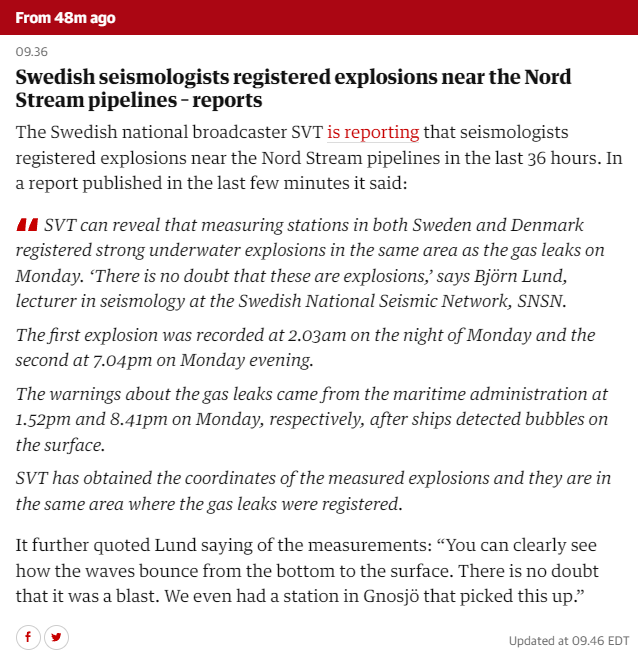 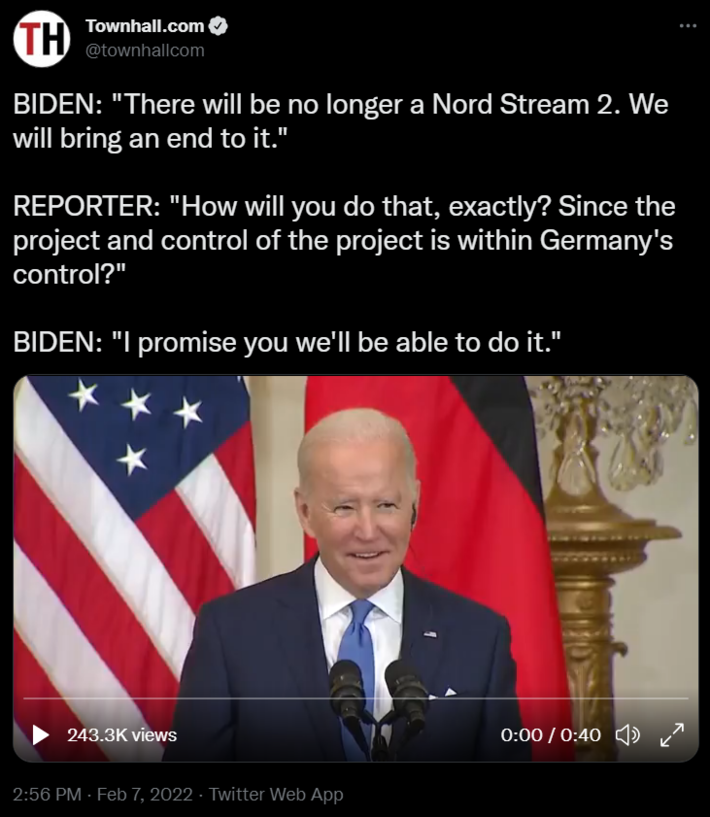 In early August, German media wrote about the activity of American ships in the area where there was now an accident on the threads of Nord Stream. Moreover, just near Bornholm Island, the Americans disabled automatic ship identification systems.

The greenleft carbonazis finally made it. Europe will fall, but will it save the planet? Listen and decide for yourself.

I like Leo, but he said Putin was in charge of the Stazi and Head of the KGB in Eastern Germany. (49:10) His KGB records show he was not even in a managerial position, so I don't see how he could have been in charge.  "...he had never really had a managerial role within the KGB, nor been an agent-handler. He had never really been exposed to the political and bureaucratic realities of life in the Lubyanka buildings or what happened to intelligence after it left the field. He left with the rank of lieutenant colonel but had really been a major: a usual perk was to receive a one-rank career bump on leaving, to help round out one's pension."  Putin's Declassified KGB Record Shows He Was No High-Flier, but a S...

I have a little odd feeling about Leo. How come he's still alive?

Good point.  I still like listening to him occasionally, but I have noticed him making some questionable statements.  Maybe he's still around to spread disinfo.

Analysis of the Euro 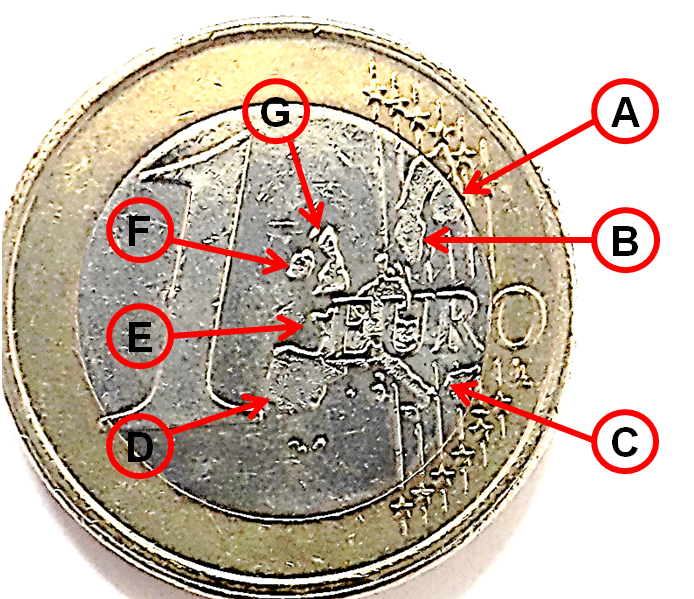 A - Finland is the testicles of European Union, but oh so gullible.
B - Sweden, the dick pissing on the countries south of it
C - Italy, the boot kicks the ass of the leftist by turning right in their latest election
D - Iberian peninsula, Portugal and Spain Destabilise by wasting too much
E - France, Mélodie d'amour chante le cœur d'Emmanuelle Macron, multicult takes them down just like the rest
F - Ireland says F you
G - England, Gee we are out of the bankrupt EU. But you have the WEF quisling running your country and a pedophile royals and bankers. Not so Great after all.

Guess who else said Nord Stream will not move forward 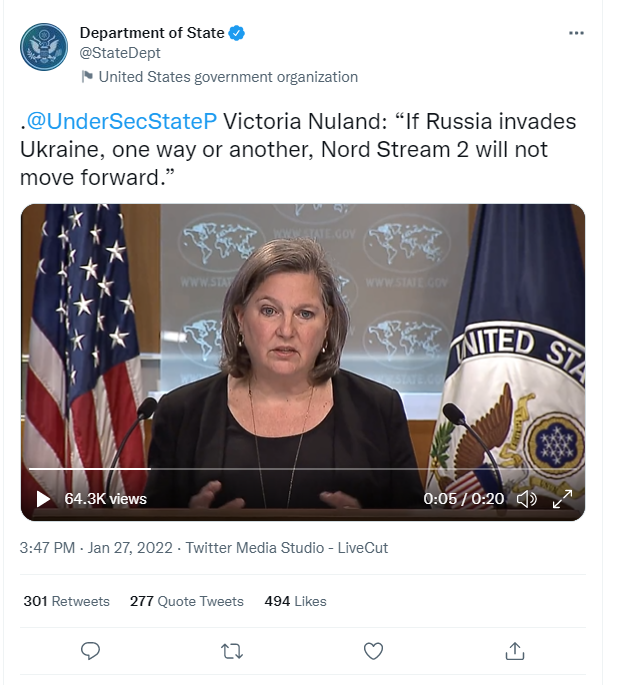