Despite the media narrative being widely debunked — and the proof that the kids were well-behaved while adults hurled racial slurs and insults at them — “comedian” Sarah Beattie has opted to solicit violence in exchange for sex acts. “I will blow whoever manages to punch that maga kid in the face,” Beattie tweeted on Monday afternoon. 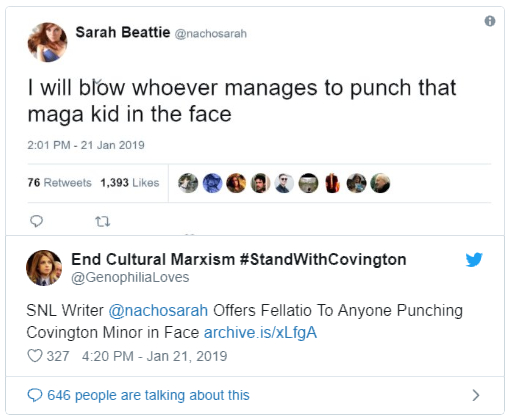 On Sunday morning, Twitter informed concerned users that a Los Angeles-based DJ had not violated their TOSwhen he called for the school to be lit on fire with the kids inside, and for his followers to shoot them.

We have reached out to Saturday Night Live and NBC for comment and will update this if one is provided.

UPDATE: An SNL writer has responded to this story by saying that Sarah Beattie does not write for them — despite her claims of being a contributor. Stolen valor in comedy? 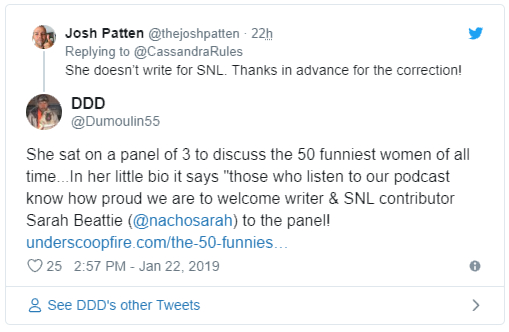 Due to her claims of working for them when she doesn’t, the show will now “clear up this confusion by scrolling a list of the writers’ names at the end of every show.”

That really sucks! These idiots are really hitting below the belt.

Yeah, the teenager was being violent.  He showed far more maturity than most "adults".

Well, I've thought about it long and hard, I'm going to go ahead and punch the kid in the face. KIDDING!!! Geez.

I checked out her instagram. She thinks she's more relevant than everyone else cause she's got big tits.

Hey I used to be hot too. It's nothing to hang your hat on because nothing in this world lasts forever. Right now I'm focusing on the Soul cause THAT shit lasts forever.

Wow is SNL still on? Really?

Apparently. It was funny for the first few years in the 70s

Yes it was very funny back then.