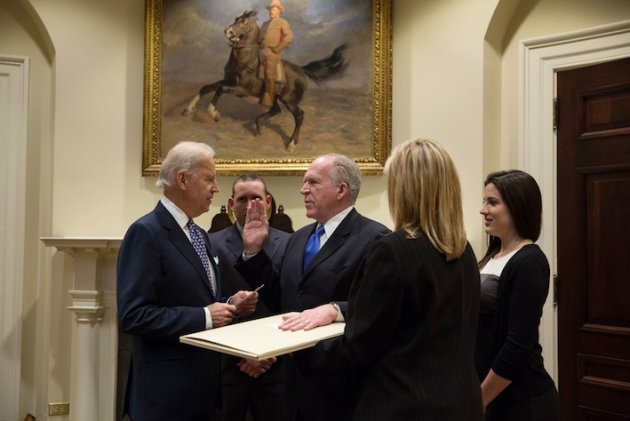 Oh, dear. This is probably not the symbolism the White House wanted.

Hours after CIA Director John Brennan took the oath of office—behind closed doors, far away from the press, perhaps befitting his status as America's top spy—the White House took pains to emphasize the symbolism of the ceremony.

“There's one piece of this that I wanted to note for you,” spokesman Josh Earnest told reporters at their daily briefing. “Director Brennan was sworn in with his hand on an original draft of the Constitution that had George Washington's personal handwriting and annotations on it, dating from 1787.”

Earnest said Brennan had asked for a document from the National Archives that would demonstrate the U.S. is a nation of laws.

"Director Brennan told the president that he made the request to the archives because he wanted to reaffirm his commitment to the rule of law as he took the oath of office as director of the CIA,” Earnest said.

The Constitution itself went into effect in 1789. But troublemaking blogger Marcy Wheeler points out that what was missing from the Constitution in 1787 is also quite symbolic: The Bill of Rights, which did not officially go into effect until December 1791 after ratification by states. (Caution: Marcy's post has some strong language.)

That means: No freedom of speech and of the press, no right to bear arms, no Fourth Amendment ban on “unreasonable searches and seizures,” and no right to a jury trial.

cheeki kea replied to Parrhesia's discussion US military aircraft circled Nord Stream incident site in September
"Wow they are not just hammering down on Germany but all Europe will suffer. "
3 hours ago

"TUCKER CARLSON: What really happened to the Nord Stream pipeline? "According to the Canadian…"
22 hours ago