Chinese delegation walks out in Davos after Zelensky’s speech — CNN 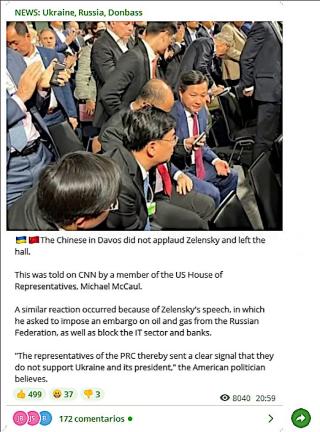 On Monday, the Ukrainian president spoke at the World Economic Forum in Davos by video link

NEW YORK, May 23. /TASS/. China’s delegation at the World Economic Forum in Davos didn’t applaud after a speech by Ukrainian President Vladimir Zelensky and then walked out of the room, CNN reported on Monday, citing Congressman Michael McCaul who is attending the forum.

McCaul showed a picture while on air, which showed China’s representatives sitting down as other people in the room are giving a standing ovation. Afterward, the Congressman said, the Chinese delegation left the room.

On Monday, the Ukrainian president spoke at the World Economic Forum in Davos by video link. He reiterated that Ukraine is not ready to make territorial concessions, called for more arms supplies to Ukraine and the participation of Western countries in the rebuilding of the country after the conflict ends.

Chinese delegation walks out in Davos after Zelensky’s speech — CNN...

"Hey Parr,  Just like it was written, up is down and so on. It is the age old battle between…"
25 minutes ago

to realize this FACT, get mad dog mad and go on the offensive. Once again they mean to KILL us and…See More
47 minutes ago
0 Comments 1 Favorite