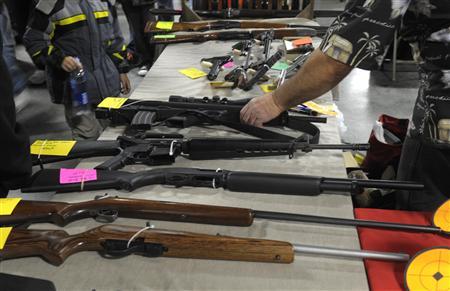 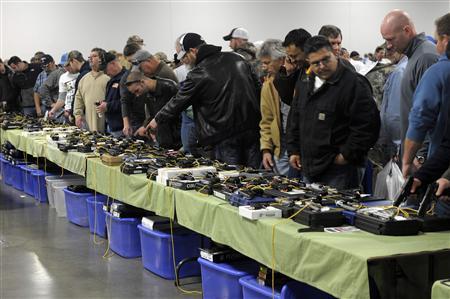 (Reuters) - Gun enthusiasts thronged to shows around the country on Saturday to buy assault weapons they fear will soon be outlawed after a massacre of school children in Connecticut prompted calls for tighter controls on firearms.

Reuters reporters went to gun shows in Pennsylvania, Missouri and Texas, and found long lines to get in the door, crowds around the dealer booths, a rush to buy assault weapons even at higher prices and some dealers selling out.

The busiest table at the R.K. Gun & Knife show at an exposition center near the Kansas City, Missouri airport was offering assault weapons near the entrance.

An AR-15 type assault weapon was among the guns authorities believe suspect Adam Lanza stole from his mother to use in the massacre of 20 school children and six adults at a Newtown, Connecticut elementary school on December 14.

The killing of innocent children at the school shocked the nation and prompted a number of politicians including President Barack Obama to call for a ban on assault weapons and ammunition clips that allow the rapid firing of multiple bullets.

Rather than tighten gun ownership restrictions, the powerful lobby for gun rights, the National Rifle Association, on Friday called for armed guards at every school.

D.R. Woody was one of those able to purchase an assault weapon at the Kansas City show on Saturday. He bought the gun for target practice because he is concerned they soon will be banned. "I didn't expect to find one. No gun stores have them," said Woody of the AR-15 type of gun.

The story was the same in Allentown, Pennsylvania, where Shirley Donley, a gun shop owner from nearby Quakertown, had an endless stream of customers. "Everybody wants assault weapons," she said, adding that she had sold more than 100 of that type of gun since the Connecticut tragedy. "I'm sold out."

Assault weapon is a broad term commonly used to refer to semi-automatic or automatic weapons that can fire multiple bullets rapidly. From 1994 to 2004 certain assault weapons and ammunition clips of more than 10 bullets were illegal.

The ban was allowed to expire when Republican George W. Bush was in the White House.

Prices for assault weapons have surged since the Connecticut shooting. At the Kansas City show, Jerome Ratliff bought an AR-15 on Saturday for target practice, paying $925. The same model would have cost only about $400 a year ago, he said. Most models were selling for $1,500 or more.

Bob Hofmeister, whose wife owns Xtreme Sports, a gun dealer with a table at the Kansas city show, said the business sold 15 to 20 AR-15s in the past week.

"Some of these people just want to show their rights to own guns," Hofmeister said.

The Second Amendment to the U.S. Constitution guarantees the right to bear arms, and most gun enthusiasts at the shows on Saturday said more restrictions on guns would not stop mass killings such as Connecticut.

Adam Ouart of Mansfield, Texas stood in a line with about another dozen people at the Lone Star show in Forth Worth, Texas, in hopes of buying a gun.

"The answer is not to limit people having guns. If someone wants to hurt somebody they are going to find a way to do it," Ouart said.

Several dealers and buyers interviewed at the shows supported the NRA proposal to put armed guards in schools.

More than 200 people lined up at each of three entrances on Saturday morning to pay the $8 entrance fee to the Will Rogers Memorial Center in Fort Worth, which has an exhibit hall spanning 25 acres. They crowded the aisles of the show and stood two-deep at booths for assault weapons and ammunition clips.

At all three shows the attendees were overwhelmingly white men, with some women and very few ethnic minorities.

Thousands of guns shows are held in the United States every year. Under federal law, licensed dealers must conduct a background check before selling to a buyer at a gun show.

But in what critics call a "loophole," which some gun control advocates..........REST OF IT

"save the planet , save your human Race save, save,save now."
19 minutes ago

"Shows us what they are capable of if they get triggered. ha ha. "
27 minutes ago

cheeki kea replied to Bob Renner's discussion They came from nowhere and YOU THOUGHT NOTHING
"You are Probably right for most people. My parents never said anything about crooked jews but for…"
1 hour ago

cheeki kea commented on Chris of the family Masters's blog post China Launches New App Allowing Citizens to Report Others For Expressing “Mistaken Opinions”
"Good post Chris you're a true site educator of truth. One of those patient teacher types who…"
2 hours ago

cheeki kea commented on Larry Flinchpaugh's blog post Cognitive Dissonance Why we find it so difficult to discuss politics.
"to Doc V. Your'e a man gifted in words a writer who expresses opinion and thought in…"
3 hours ago

cheeki kea commented on Larry Flinchpaugh's blog post Cognitive Dissonance Why we find it so difficult to discuss politics.
"Well, take that as a complement Larry. Everybody here has a gift and you have a nack to drum up…"
5 hours ago

Larry Flinchpaugh commented on Larry Flinchpaugh's blog post Cognitive Dissonance Why we find it so difficult to discuss politics.
"Nearly everyone suffers, to some degree with cognitive dissonance. Is this a compliment or…"
9 hours ago

Doc Vega commented on Larry Flinchpaugh's blog post Cognitive Dissonance Why we find it so difficult to discuss politics.
"Larry, are you the great moderator? No, we conservatives don't suffer from cognitive…"
19 hours ago