(Reuters) - U.S. Secretary of State John Kerry on Sunday condemned Russia's "incredible act of aggression" in Ukraine and threatened economic sanctions by the United States and allies to isolate Moscow, but called for a peaceful resolution to the crisis.

"You just don't in the 21st century behave in 19th century fashion by invading another country on completely trumped up pre-text," Kerry told the CBS program "Face the Nation."

The Ukraine crisis has taken already strained U.S.-Russian relations to new lows. Kerry did the rounds of the Sunday morning television news shows to emphasize the Obama administration's condemnation of Russia's moves. 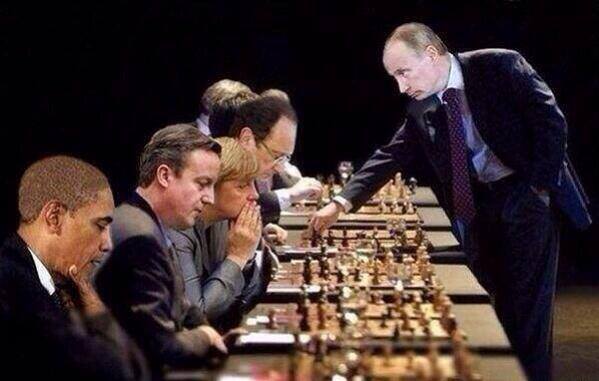 Russia gives Ukrainian forces in Crimea ultimatum to surrender - In...

This is all for show. This is going to happen in the US. That is after the reset. Then after the crash.

Fortunately, I happen to disagree that this is going to happen in the US, and I think the Occupy was a somewhat of a dry run to see how far they could take a revolution in other parts of the world like Syria. I do however think that much of this show is indeed for public consumption. I mean they don't call them theater wars for nothing. The true back story will be hidden from the public for decades, but in the meantime we still have the Superbowl and the Oscars, right?

Why don't I think this will happen in the US? Well there is nothing that the globalist (I just call 'em Jews) want that they haven't already got from the US.

I mean they control the central bank and they control which industry does what. They practically ran up the credit card in 2008, and looking back now I suspect that was done because they knew that they weren't going get their big war with Iran. This new conflict with Russia is beyond insane though.

They know that they can still get a good 65% of people buying into false flags/terror events and other distractions; maybe not as high as they'd like but nothing they can't deal with with through their control of the police departments, they courts and the media. They've already got the LGBT system in place and have even convinced some parents to dress their boys as little girls. I mean, where does a society go from there, and what additional bullshit could they possibly saddle us with that we won't gladly accept, and pay for?

Well they did let us keep the guns, but that's only because nearly every state knows just how bad it could get if a few trucks ever missed a grocery store delivery in a major metro area like DC or Chicago. I mean the police can barely handle a few flash mobs of black teens let alone a full blown food riot. And a food riot would not look good on a world stage especially under the liberal Jew's multicult, but flailing hero Mr. Obama. But even they are going to throw Obama under the bus when he's outlived his usefulness, just like they did to 'ol Bill Clinton.

So no, I don't think there's going to be an intentional crash on a national level because so many cities so very close to a total collapse on their own without any additional help. And even if a few cities did collapse for whatever reason, my guess if that a rebound would be fairly swift.

And what's this about a reset? I used to believe in "The Reset," but that was near two years ago when I first heard of The Reset, and it hasn't happened yet.

This system is not sustainable. It is based on manipulation, and there is problems everywhere. Their media is now facing many fronts at the same time. If Russia is going to be "the Bogeyman" then "War on Terror" or "Mass schooting" is not "the Bogeyman" ... they cannot focus on everything.

i sorta think the Russians are helping Crimea