The Times of Israel, an independent Israeli newspaper that counts among its staff a number of former reporters for the Israeli daily Ha’aretz, published a fascinating but largely overlooked story datelined Jerusalem and Zhitomir, Ukraine, March 16, 2014, and which was written by its respective Russian and Ukrainian correspondents, Hirsh Ostropoler and I. Z. Grosser-Spass, citing a secret report provided to the Israeli government. The report, written by a select panel of scholars of Jewish history drawn from academia and other research centers, concluded that that European Jews are in fact descended from Khazars, a war-like Mongol-Tatar group that ruled over Ukraine and southern Russia, which mass-converted to Judaism in the eighth century AD.

Zionists have long argued that the land claimed by Israel was the biblical birthright of the Jewish people who were forced from the land in a so-called «diaspora» after repeated conquests by various empires. Proof that Ashkenazi Jews, which make up a majority of the Israeli Jewish population, have no historical link to Palestine would call into question the entire premise of Israel as the historical «5,000-year old» homeland of the Jewish people.

The Israeli journalists noted that any conversation of the Khazars and modern Israel has always been met with disdain by Israeli leaders. They quote Israeli Prime Minister Golda Meir as once saying, «Khazar, Schmazar. There is no Khazar people. I knew no Khazars. In Kiev. Or Milwaukee. Show me these Khazars of whom you speak». DNA proof that a migratory Khazar population from Europe is now claiming ancient roots in Palestine largely eliminates Zionist claims to the region.

The evidence that eastern and central European Jews have no historical claim to Palestine has resulted in a flurry of activity in Israel and abroad. The Israeli Knesset will soon vote on a bill passed by the Israeli Cabinet that legalizes Israel as a Jewish «national state». Israeli Prime Minister Binyamin Netanyahu, who read the secret report on the Khazars, has declared that «Israel is the Jewish, nationalist state for the Jewish people». With the Ashkenazi claims to Israel tenuous, at best, Netanyahu, his Likud Party, and his Jewish Orthodox and West Bank settler party allies have no other choice but to aggressively stake their nationalist claims to not only Israel but also to the West Bank – which the nationalists refer to as «Judea and Samaria».

However, some Israelis and Jews abroad are not taking any chances. One of the main reasons why Ukrainian Jewish billionaire tycoon Ihor Kolomoisky, the governor of Ukraine’s Dnipropetrovsk province and citizen of Ukraine, Israel, and Cyprus, is spending tens of millions of dollars on the recruitment of right-wing Ukrainian nationalists and neo-Nazis from other parts of Europe to fight against the Russian-speaking majority in the Donbass region of eastern Ukraine, is a fear that plans to turn Ukraine into a «second Israel» will be derailed. Russia’s protective measures for the Donbass, as well as its incorporation by referendum of Crimea, the latter prized by the resurgent Khazarian Jewish nationalists, threaten the transformation of Ukraine into a second homeland for Ashkenazi Jews who are finding their hold on Israel prime tenuous, at best. 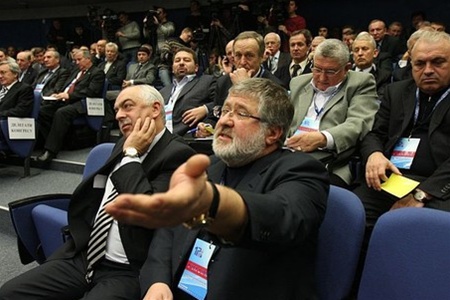 The Times of Israel’s explosive story about the Khazarian roots of the Ashkenazis also revealed that Israel, knowing that a Palestinian state is inevitable considering the increasing pressure for it from Europe, is preparing to resettle Ashkenazi settlers in the West Bank to Ukraine. Israel’s advanced research in genetics resulted in a direct DNA line being established between Israel’s Ashkenazis and the Khazars who were dispersed across eastern and central Europe after Russia conquered the Khazarian Empire in the 11th century.

Israelis and their Zionist allies around the world have always accused proponents of the Khazarian-Ashkenazi genetic connection of deep-rooted anti-Semitism. However, the genetic research contained in the secret Israeli report confirms what Israeli historian Shlomo Sand revealed in his book, «The Invention of the Jewish People». The concept of the Khazarian bloodline was first broached by Hungarian historian Arthur Koestler in his 1976 «The Thirteenth Tribe».

The Times of Israel reporters quoted an unnamed aide to Netanyahu who revealed the plans for Israeli emigration to Ukraine: «We first thought that admitting we are really Khazars was one way to get around [Palestinian President Mahmoud] Abbas’s insistence that no Jew can remain in a Palestinian state. Maybe we were grasping at straws. But when he refused to accept that, it forced us to think about more creative solutions. The Ukrainian invitation for the Jews to return was a godsend. Relocating all the settlers within Israel in a short time would be difficult for reasons of logistics and economics. We certainly don’t want another fashlan like the expulsion of the settlers in the Gaza Hitnatkut [disengagement]».

Ostropoler and Grosser-Spass also quoted an anonymous Israeli intelligence source as saying: «We’re not talking about all the Ashkenazi Jews going back to Ukraine. Obviously that is not practical. The press as usual exaggerates and sensationalizes; this is why we need military censorship».

The Israeli and Ukrainian Jewish plan is to resettle the Ashkenazis from the West Bank in the Russian autonomous republic of Crimea after what they see will be an eventual retrocession of the peninsula to Ukraine. The ultimate plans of Ukrainian Zionists such as Kolomoisky, in addition to such American allies as Assistant Secretary of State for European and Eurasian Affairs Victoria Nuland and U.S. ambassador to Ukraine Geoffrey Pyatt, is to establish an autonomous Jewish region of Crimea and restore to the peninsula the original Khazarian name of Chazerai. Although the Tatars who live in Crimea and elsewhere today are largely Muslims, the plans to create a Khazar nation in Ukraine will also likely involve global proselytization by Israelis and Ukrainians who are bent on restoring Khazaria as an alternative to Israel. Current Jewish proselytization efforts among «crypto-Jewish» Catholic mestizos in Mexico; Christians, Hindus, and Buddhists in India; Russian Orthodox and Buddhists in Birobidzhan, Siberia; Muslims in Pakistan and Afghanistan; and Christians, Muslims, and animists in Uganda, Ghana, Mali, Nigeria, Zimbabwe, Mozambique, and Malawi; and among small pockets of alleged Jewish descendants in China, Sao Tome and Principe, Tahiti, Suriname, Vietnam, Brazil, and Peru point to an Israeli plan intent on increasing Jewish numbers for the purpose of settlement in a number of locations outside the illegally-occupied West Bank and the Golan Heights. In addition to Ukraine, northern Iraq, eastern Libya, Alexandria in Egypt, parts of Turkey, Patagonia in Argentina, and Uganda are all being considered for potential Jewish settlements to complement the West Bank or replace it. The so-called «Lost Tribe of Israel,» the Bnei Menashe of Mizoram and Manipur states of northeast India are viewed by many Indians as not actually Jewish but desperate economic migrants looking for better lives in Israel. So desperate are the Israeli expansionists to increase their numbers, dubious Jewish DNA studies have attempted to classify the Sorbs of eastern Germany; the Bantu Lemba people of Zimbabwe, Malawi, and Mozambique; and certain groups of southern Italians, Armenians, and Greeks as «lost tribes» of Israel in order to increase Judaism’s numbers and geographical land claims.

In Ukraine, the so-called «second Israel,» Kolomoisky and Kiev have enlisted a number of ex-Israel Defense Force members in their volunteer battalions, including the Azov Battalion, One of the Israeli units is known as the «Blue Helmets of Maidan» and is commanded by an Israeli using the pseudonym «Delta». If Israel did not have a vested interest in expanding its influence in Ukraine it could easily prevent these units from going to Ukraine.

There are also Sephardic Jewish settlers in the West Bank who are descended from the Jewish Marranos of Moorish-ruled Spain who were expelled from the Iberian Peninsula during the Spanish and Portuguese inquisitions of the 15th century who have no ties to Ashkenazis or Khazaria. Recently, in a move similar to Ukraine’s invitation to the Ashkenazis from the West Bank to settle in Ukraine, Spain and Portugal have enacted legislation that would permit any Sephardic Jew anywhere in the world who can prove their descent from the Marranos expelled during the Inquisition to obtain citizenship in the two countries.

Some Russian speakers in the Donbass are wary of the intentions of pro-Israelis in the Kiev government. Oddly, Kolomoisky has recruited a number of neo-Nazis from western Ukraine and Europe to fight in his battalions whose right-wing organizations have always subscribed to the notion of a future «battle royale» between Russia and the remnants of Khazaria in Israel, Ukraine, Poland, and the Republic of Georgia to avenge Khazaria’s defeat in the 11th century by the Russian Empire.

Israel provided the Georgian government of President Mikheil Saaakashvili, which included a number of dual Israeli-Georgian nationals of Khazar descent, with military and intelligence assistance in its 2008 war against South Ossetia and Abkhazia. Similarly, the Israelis have established close ties with Azerbaijan, a country, which like Georgia and Ukraine, has ancient links to Khazaria through an indigenous group of Azeri Jews known as Subbotniks.

The anonymous Netanyahu aide is also quoted by The Times of Israel journalists as revealing why the Israeli government in making a play for large Israeli settlements in Ukraine: «As the Prime Minister has said, no one will tell Jews where they may or may not live on the historic territory of their existence as a sovereign people. He is willing to make painful sacrifices for peace, even if that means giving up part of our biblical homeland in Judea and Samaria. But then you have to expect us to exercise our historical rights somewhere else. We decided this will be on the shores of the Black Sea, where we were an autochthonous people for more than 2000 years. Even the great non-Zionist historian Simon Dubnow said we had the right to colonize Crimea. It’s in all the history books. You can look it up».

The aide revealed to the two Israeli journalists that Netanyahu appreciates the strength of the ancient Khazars and quote Netanyahu as saying, «we are a proud and ancient people whose history here goes back 4,000 years». But the aide added, «The same is true of the Khazars . . . in Europe and not quite as long. But look at the map: the Khazars did not have to live within ‘Auschwitz borders.’»

To the uninformed, which apparently includes President Barack Obama and U.S. Secretary of State John Kerry, the current Israeli desire to create a new nationalist Israeli identity is tied directly to the activities of the Ukrainian leadership of Petro Poroshenko, Arseniy Yatsenyuk, Kolomoisky, and their American supporters, Nuland and Pyatt, in creating a safe haven, temporary or not, for the Ashkenazi settlers of the West Bank. Thanks to the Times of Israel exposé of the secret Israeli report on the Khazars and modern-day Israel, the machinations behind the American and European Union destabilization of Ukraine becomes all the more apparent.