A second person confirmed to The Associated Press that apparent Russian missiles struck a site in Poland about 15 miles from the Ukrainian border.

The Russian Defense Ministry denied being behind “any strikes on targets near the Ukrainian-Polish border” and said in a statement that photos of purported damage “have nothing to do” with Russian weapons.

A NATO official, speaking on condition of anonymity, said the alliance was looking into reports of a strike in Poland. The U.S. National Security Council said it was also looking into the reports.

Polish government spokesman Piotr Mueller did not immediately confirm the information from the U.S. intelligence official, who spoke on condition of anonymity because of the sensitive nature of the situation. But Mueller said top leaders were holding an emergency meeting due to a “crisis situation.”

Polish media reported that two people died Tuesday afternoon after a projectile struck an area where grain was drying in Przewodów, a Polish village near the border with Ukraine.

Neighboring Moldova was also affected. It reported massive power outages after the strikes knocked out a key power line that supplies the small nation, an official said.

The missile strikes plunged much of Ukraine into darkness and drew defiance from President Volodymr Zelenskyy, who shook his fist and declared: “We will survive everything.”

Zelenskyy said Russia fired at least 85 missiles, most of them aimed at the country's power facilities, and blacked out many cities.

His energy minister said the attack was “the most massive” bombardment of power facilities in the nearly 9-month-old Russian invasion, striking both power generation and transmission systems.

The minister, Herman Haluschenko, described the missile strikes as “another attempt at terrorist revenge” after military and diplomatic setbacks for the Kremlin. He accused Russia of “trying to cause maximum damage to our energy system on the eve of winter.”

The aerial assault, which resulted in at least one death in a residential building in the capital, Kyiv, followed days of euphoria in Ukraine sparked by one of its biggest military successes — the retaking last week of the southern city of Kherson.

The power grid was already battered by previous attacks that destroyed an estimated 40% of the country’s energy infrastructure.

Russian President Vladimir Putin has not commented on the retreat from Kherson since his troops pulled out in the face of a Ukrainian offensive. But the stunning scale of Tuesday’s strikes spoke volumes and hinted at anger in the Kremlin.

By striking targets in the late afternoon, not long before dusk began to fall, the Russian military forced rescue workers to labor in the dark and gave repair crews scant time to assess the damage by daylight.

More than a dozen regions — among them Lviv in the west, Kharkiv in the northeast and others in between — reported strikes or efforts by their air defenses to shoot missiles down. At least a dozen regions reported power outages, affecting cities that together have millions of people. Almost half of the Kyiv region lost power, authorities said. Ukrainian Railways announced nationwide train delays.

Zelenskyy warned that more strikes were possible and urged people to stay safe and seek shelter.

“Most of the hits were recorded in the center and in the north of the country. In the capital, the situation is very difficult,” said a senior official, Kyrylo Tymoshenko.

He said a total of 15 energy targets were damaged and claimed that 70 missiles were shot down. A Ukrainian Air Force spokesman said Russia used X-101 and X-555 cruise missiles.

As city after city reported attacks, Tymoshenko urged Ukrainians to “hang in there.”

Here we go:  unnamed govt official, no evidence, Pentagon has no information...But Russia did it!  Just like they blew-up their pipelines, the Crimean bridge, "invaded" Ukraine for no reason at all, also Iraq did 9/11, the North Vietnamese totally did the attack in the Gulf of Tonkin...

“This is a Russian missile strike on collective security!” Zelensky said in a statement, calling it “a very serious escalation.” He also urged western nations to put Russia “in its place” and branded the country as “terrorist."

“The longer Russia feels impunity the higher is the threat for anyone within the reach of Russian missiles,” the Ukrainian president warned, though he did not provide evidence proving it was Russian missiles that struck Poland.

Earlier on Tuesday, the Polish government convened an emergency meeting over the incident. The Polish authorities did not provide any details about the nature of what they called a “crisis situation.” A government spokesman, Piotr Mueller, called on the media and the public “not to publish unconfirmed information.”

According to Polish media, at least two people died in an explosion that hit a grain drier facility in the Polish town of Przewodow located not far from the Ukrainian border. Some media then claimed that the blast was caused by a missile strike.

AP reported, citing an unnamed US intelligence official, that Russian missiles crossed into Poland. The Pentagon then stated it “has no information” to corroborate such reports, adding that it is aware of the situation and would look further into it.

The Russian Defense Ministry denied any responsibility for the incident by saying that the nation’s military did not strike any targets near the Polish-Ukrainian border. It also branded the Polish media reports a “provocation.”

Yeah isn't that the case. Blame Russia and indeed our media was similar in doing so till news came out from England and they had to back tract in their stupidity. I had mentioned to my friends maybe it could be Ukraines doing in either incompetence or a low-key false flag stunt.  In Todays news.....express.co.uk  It now states........ 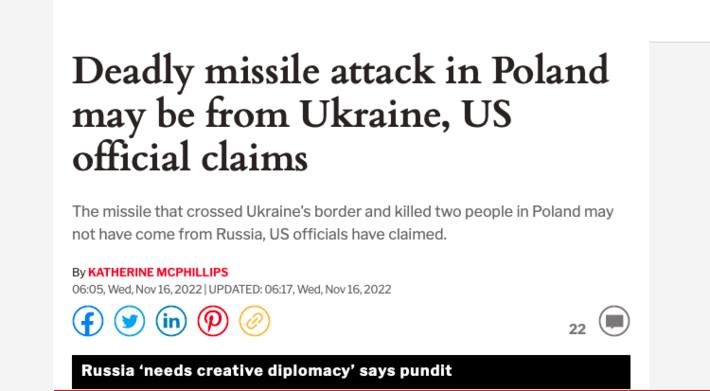 Investigation Dropped After Discovery That Ukraine, NOT Russia, Fired the Missile Into Poland

As the media sped right to World War III, blaming Russia without any facts, the truth was Ukraine’s missile hit Poland, not Russia’s. According to Joe Biden, Ukraine’s air defense missile was responsible for the Poland blast. The source of information was NATO. It was immediately determined that it was an “unfortunate accident,” and no investigation will follow.

Investigation Dropped After Discovery That Ukraine, NOT Russia, Fir...

I have no doubt that NATO will send Ukraine more missiles although they have proven they are not responsible enough to handle them.

DazNick is now a member of 12160 Social Network
5 hours ago
Welcome Them!

During the opening ceremony for the European Figure Skating Championships 2023 in Espoo Finland, a 59 year old man by the name of "Minna-Maaria" Antikainen f...
14 hours ago
0 Comments 0 Favorites

"I guess we'll have the climate change then and get it Over with. Loser."
20 hours ago