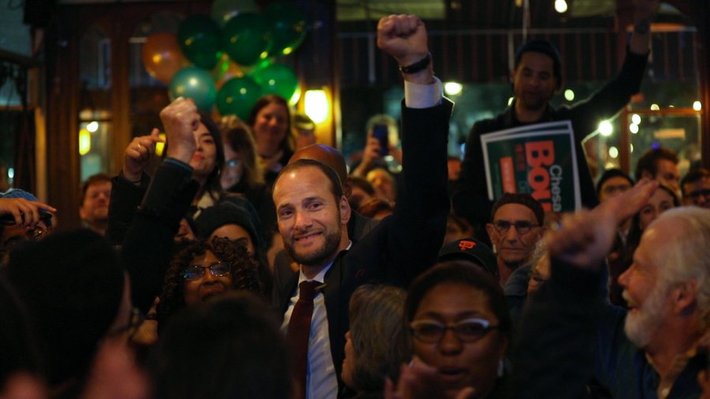 SAN FRANCISCO – Chesa Boudin, the son of anti-war radicals sent to prison for murder in the Brinks armored car robbery in Nyack when he was a toddler, has won San Francisco’s tightly contested race for district attorney after campaigning to reform the criminal justice system.

He was raised in Chicago by Weather Underground leaders Bill Ayers and Bernardine Dohrn before studying law at Yale University. He later won a Rhodes Scholarship and worked as a translator for Venezuela’s late President Hugo Chavez before coming to San Francisco.

Chesa Boudin, the urine-and-feces-plagued city’s incoming district attorney, pledged during the campaign not to prosecute public urination and other quality-of-life crimes if he was elected. Boudin declared victory Saturday night after results showed him winning a plurality of votes in the DA race.

“We will not prosecute cases involving quality-of-life crimes. Crimes such as public camping, offering or soliciting sex, public urination, blocking a sidewalk, etc., should not and will not be prosecuted,” Boudin vowed in response to an American Civil Liberties Union (ACLU) questionnaire during the campaign.

It has come to a choice of living with people crapping, urinating and throwing dirty needles on the sidewalks and offering or soliciting sex in front of you and your children or leaving.  Ironic that he refers to these things as "quality-of-life crimes".

"I improved on a few things,"
22 minutes ago

A video I posted to YouToilet was removed for "medical misinformation."  Pretty funny, that!  It…See More
4 hours ago
0 Comments 0 Favorites

Twilight Zone replied to Twilight Zone's discussion Border Security Director in Biden's White House Will Come from the UN
"This is Barry's reign 2.0.  All of Joey's cabinet are from Barry's group or UN…"
8 hours ago

MAC replied to Twilight Zone's discussion Border Security Director in Biden's White House Will Come from the UN
"During the Darkfag aka Obama administration if I'm not mistaking, the u.S. population went…"
8 hours ago

Guardian of Scotland commented on Chris of the family Masters's blog post Joe Biden Issued 0 Executive Orders
"The Federal Register now indidates that there are Executive Orders sent by Biden.  This even…"
9 hours ago