Big implications for Americans and all the world. 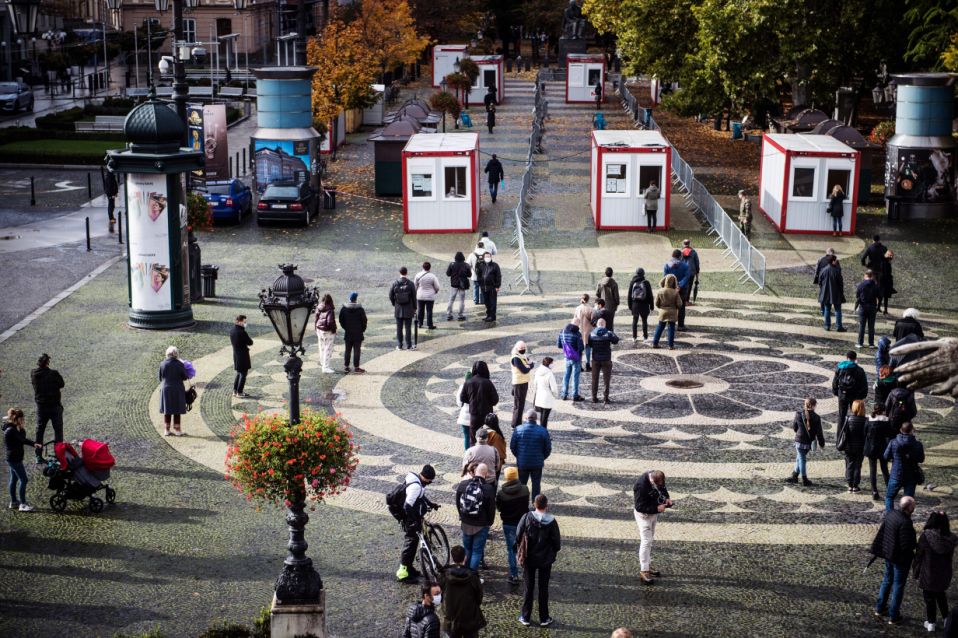 OMG! They discovered one percent of the population has "COVID"
"Those who refused to take the tests will be excluded from life, will be imprisoned under house arrest, not allowed to work, to buy food or medicine. The world needs to know what's going on. Slovak citizens became the victims of Mengele's experiments and genocide."
by Memfer
(henrymakow.com)
Bratislava--On October 31, 2020,  Slovak Prime Minister Igor Matovič used threats and intimidation to force people to take COVID-19, experimental antigen tests. The World Health Organization WHO granted the test kit an exemption for the experiment on Slovak citizens.
Testing is also performed by veterinarians! 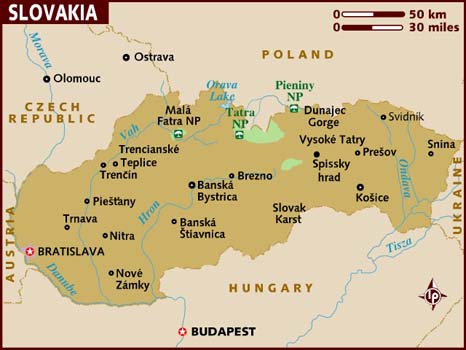 "In a pilot test conducted last week in Slovak city Bardejov, serious illnesses occurred immediately after testing, and after a forced mass assembly, they also contracted other illnesses such as influenza and COVID-19.
The Government of the Slovak Republic mobilized the Slovak army and police and invited foreign troops from Austria and Hungary and  US Army uniforms were also seen. Those who refused to take the tests will be excluded from life, will be imprisoned under house arrest, not allowed to work, to buy food or medicine. The world needs to know what's going on. Slovak citizens became the victims of Mengele's experiments and genocide.
"Today we are the victim, but if we citizens of the whole world do not revolt, you will be the victim tomorrow. Please share, sign petitions, protest, defend yourself, today it is testing, tomorrow should be the vaccination!"
For your information, the Slovak government "borrowed" from Austria exactly 33 army medics, so it was really a "huge" Masonic help to test the whole nation.
The "voluntarily" (under of threat of losing job or not letting them go to the hospital or even supermarket!) tested majority (more than 3 and a half million out of 5 and a half) received a blue certificate (which I call "čertifikát", as čert in Slovak means devil or demon) with three covid-sixes near the bottom left corner.
The nationwide testing was lawless as it was not approved by Slovak parliament. Some even suspect Slovakia was selected by globalists as a worldwide testing ground for "voluntary" testing and later "voluntary" vaccination because of Slovak's peaceful mentality. 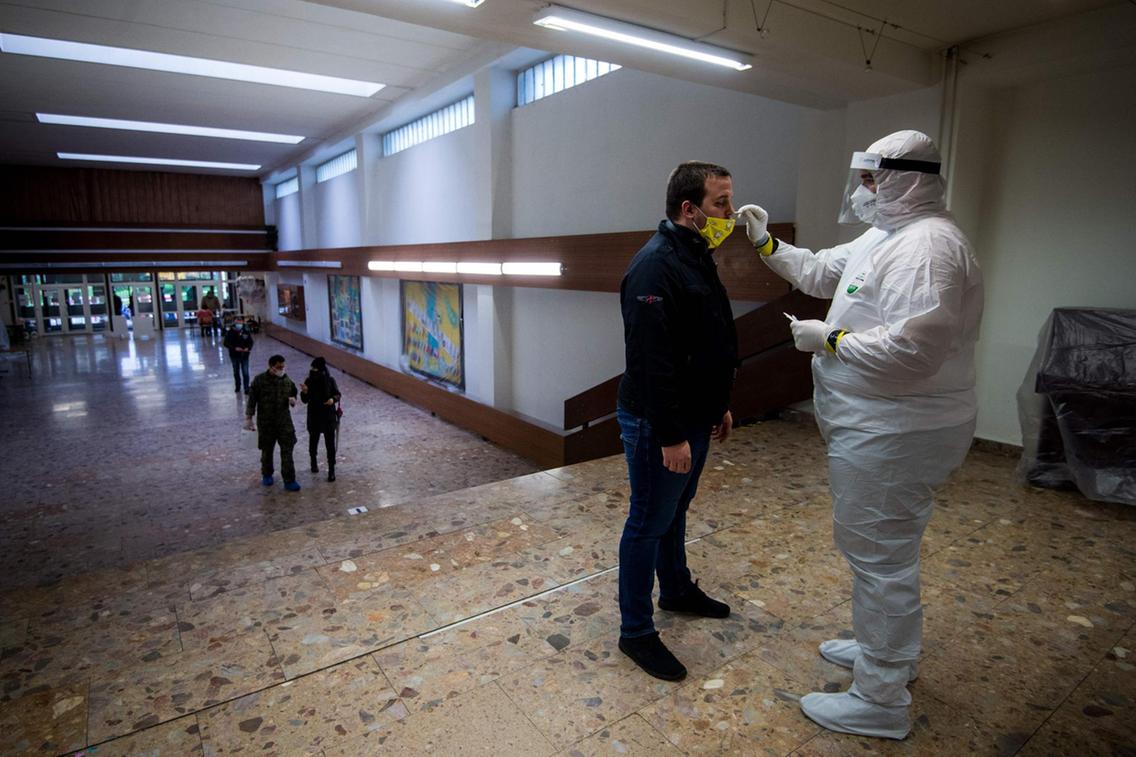 So, on Halloween and the day after, millions of people were lined in the rows outside in the cold rain, sometimes few hours, to be tested for antigens. At the same time, meeting more than 5 people simultaneously, even family members was forbidden. The government recommended to people older than 65 years to stay home and not attend the testing, but after it was done, they realized they were not allowed to go to the doctor or bank or even to take their pension in the post office.
Then the prime minister said in TV that the negative test can be falsely negative and people should not go outside without a reason.
People could not go to the cemetery to visit the places of rest of their deceased relatives (a widespread practice on the day after Halloween), even with the negative result of the test.
They were told to light the candle at home instead. Then the prime minister (by the way, well-known plagiarist and tax fraud) Matovič said: "I am sorry for forcing you to go to test yourselves." 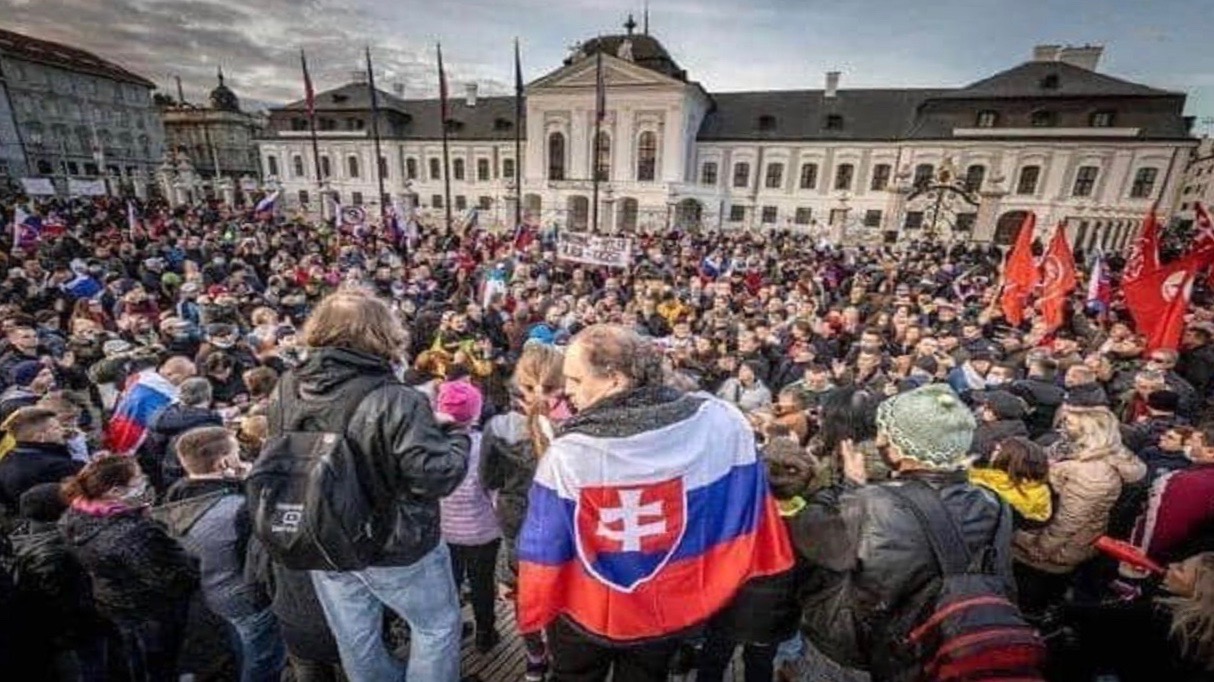 No wonder that on 31 st anniversary of the so-called Gentle Revolution (which was of course a scam) huge crowds of more than ten thousand people came to the streets an... vast majority of them without face diapers.
In bizarre twist, the podium was shared by sympathizers of Slovak Nazi puppet state (People&#39;s Party Our Slovakia) and commies (Communist Party of Slovakia) alike. But there was also an editor in chief and publisher of Slovak real news magazine Zem a vek, Mr. Rostas, speaking (the monthly magazine is portrayed as a hybrid threat). Of course, during the protests, police made some real attacks on people and hoax false flag attacks on themselves. The policemen without identification numbers even attacked and arrested a member of parliament without apparent reason.
Sadly, most of Slovak citizens still believe in corporate bullshit news and wear face diapers outside, motivated mainly by lawless, unprecedented 1,650 euros penalty.
---
First Comment from Me1776
US troops from Germany are indeed in Slovakia. This is training for what will go down in America starting February 1. Governor Brian Kemp of Georgia secretly working for Biden and is allowing the destruction of all evidence from the election. The same operation is taking place in Nevada, Minnesota, Michigan, Wisconsin, and Arizona.
CIA did indeed run the operation in collusion with Biden, Obama, and Clinton operatives within various federal and state organizations. In Skype meeting held between Biden team and General Milley, a pledge was made by the general that secures military support for an orderly Biden transition.
Units of the 82nd Airborne and 101st Airmobile divisions now placed on standby for deployment to the DC area to keep GOP from any actions to keep the White House. ANTIFA/BLM now being armed by local FBI offices in DC, Richmond, Baltimore, NYC, Dover, Annapolis, Boston, and Atlanta.
FBI has been pivotal in training ANTIFA/BLM since 2014 under the direction of the Obama White House per John Brennan. Look to London as to how Trump supporters will now be dealt with. Civil war coming to America as feds loyal to Democrats begin to institute a reign of terror.
Lists are indeed being compiled of Americans seen as loyal to the President and the Constitution. President and loyal Americans are in no way ready for what's coming.
Massive crackdown with wholesale slaughter by leftist federal units with government plus many thousands of deputized former convicts recently released. Intelligence also being collected showing possible invasions of small numbers of Chinese security forces now stationed outside Vancouver. These people all English speaking and will come across the border dressed as the Washington National Guard.
These will be the ones tasked with seizing key infrastructure and the assassination of key GOP officials in Portland and Seattle. In Texas the same op will be deployed as tens of thousands of cartel members from south of the border will cross, dressed as law enforcement, to perform same. Cities targeted will be Austin, Dallas, Houston, El Paso, and San Antonio. Mayors of these cities actively colluding.
Fix in at the judicial level and in the Governor's offices of 32 states to make sure Trump gets no hearing. Legislators now being targeted for roundup. This is a coup. It is already moving into the operational phase.
Think Viet Cong during the Tet Offensive. Massive violence on the national level.
Trump does have support from various Special Forces but units are too small to do much. At best they can get the President to safe areas and provide protection.
What happens next depends on the American people. Biden is waging shock assault will cow Americans into compliance. Media key as conservative areas will experience shutdown of all comms and power while liberal areas are flooded with stories accusing Trump of installing a coup. Operatives from more than a dozen American hating countries will attack key utilities and assassinating those considered key leadership types crucial to keeping America safe.

Phyllis Maka commented on Phyllis Maka's blog post Why the need for masks then? or toxic vaccines?
"You won't get anything from nasa or anyone else. They have this world locked down in their…"
1 hour ago

cheeki kea commented on Phyllis Maka's blog post Why the need for masks then? or toxic vaccines?
"https://science.nasa.gov/science-news/science-at-nasa/2008/30oct_ftes  This is the portal sun…"
3 hours ago

cheeki kea commented on Phyllis Maka's blog post Why the need for masks then? or toxic vaccines?
"Phyllis there is Very little info out there about any of this, but there is some which makes me…"
3 hours ago

cheeki kea favorited Aaron's blog post Photographed at London Gatwick Airport in 2013... That is why they need this false pandemic...
5 hours ago

cheeki kea commented on Central Scrutinizer's blog post CNA Nursing Home Whistleblower: Seniors Are DYING LIKE FLIES After COVID Injections! SPEAK OUT!!!
"Good on this brave guy who is speaking up."
5 hours ago

cheeki kea commented on Chris of the family Masters's blog post No Title
"https://www.scientificamerican.com/article/australian-lab-first-to-grow-new-virus-outside-china/…"
5 hours ago

cheeki kea commented on Chris of the family Masters's blog post No Title
"I disagree, I'm incline to believe the virus has indeed been been isolated but the truth of…"
6 hours ago

Twilight Zone replied to Twilight Zone's discussion 'Public health experts' now call for three masks to stop the spread
"Perhaps they should suggest plastic bags, worn tightly secured around our necks and get it…"
6 hours ago