The US Government Is Nationalizing Many Financial Markets with Money from the Federal Reserve, Merging the Treasury with the Fed 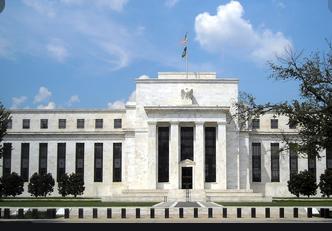 The Federal Reserve has become deeply invested in corporate bonds, asset-backed securities, commercial paper, and exchange-traded funds, despite regulations prohibiting those measures. Theoretically, the Fed is only allowed to purchase or lend against securities that have government guarantees. However, the Treasury, financed by the Fed, now is buying securities and backstopping loans. In short, the federal government is nationalizing large swaths of the financial markets, and the Fed is creating the money to do it. The Fed announced $1-trillion a day in repurchase agreements (repo loans) and unlimited quantitative easing. -GEG

In just these past few weeks, the Fed has cut rates by 150 basis points to near zero and run through its entire 2008 crisis handbook. That wasn’t enough to calm markets, though — so the central bank also announced $1 trillion a day in repurchase agreements and unlimited quantitative easing, which includes a hard-to-understand $625 billion of bond buying a week going forward. At this rate, the Fed will own two-thirds of the Treasury market in a year.

But it’s the alphabet soup of new programs that deserve special consideration, as they could have profound long-term consequences for the functioning of the Fed and the allocation of capital in financial markets. Specifically, these are:

To put it bluntly, the Fed isn’t allowed to do any of this. The central bank is only allowed to purchase or lend against securities that have government guarantee. This includes Treasury securities, agency mortgage-backed securities and the debt issued by Fannie Mae and Freddie Mac. An argument can be made that can also include municipal securities, but nothing in the laundry list above.

So how can they do this? The Fed will finance a special purpose vehicle (SPV) for each acronym to conduct these operations. The Treasury, using the Exchange Stabilization Fund, will make an equity investment in each SPV and be in a “first loss” position. What does this mean? In essence, the Treasury, not the Fed, is buying all these securities and backstopping of loans; the Fed is acting as banker and providing financing. The Fed hired BlackRock Inc. to purchase these securities and handle the administration of the SPVs on behalf of the owner, the Treasury.

In other words, the federal government is nationalizing large swaths of the financial markets. The Fed is providing the money to do it. BlackRock will be doing the trades.

This scheme essentially merges the Fed and Treasury into one organization. So, meet your new Fed chairman, Donald J. Trump.

In 2008 when something similar was done, it was on a smaller scale. Since few understood it, the Bush and Obama administrations ceded total control of those acronym programs to then-Fed Chairman Ben Bernanke. He unwound them at the first available opportunity. But now, 12 years later, we have a much better understanding of how they work. And we have a president who has made it very clear how displeased he is that central bankers haven’t used their considerable power to force the Dow Jones Industrial Average at least 10,000 points higher, something he has complained about many times before the pandemic hit.

When the Fed was rightly alarmed by the current dysfunction in the fixed-income markets, they felt they needed to act. This was the correct thought. But, to get the authority to stabilize these “private” markets, central bankers needed the Treasury to agree to nationalize (own) them so they could provide the funds to do it.

In effect, the Fed is giving the Treasury access to its printing press. This means that, in the extreme, the administration would be free to use its control, not the Fed’s control, of these SPVs to instruct the Fed to print more money so it could buy securities and hand out loans in an effort to ramp financial markets higher going into the election. Why stop there? Should Trump win re-election, he could try to use these SPVs to get those 10,000 Dow Jones points he feels the Fed has denied everyone.

Permalink Reply by Chris of the family Masters on March 30, 2020 at 1:33pm
Yet, X22 report says the Fed is no more. I have always suspected this guy is a controlled opposition.

My main problem with X22 is that his delivery is so dry and monotone, it's a bit like concentrating on a ticker tape. I can focus on it for about five minutes. Once I listened to a whole episode, and it was tortuous.

Nationalization is a misleading term. US inc. is a company as is the Fed. There is nothing 'National" about them.

Keisha Ruan replied to Guardian of Scotland's discussion Pallets of bricks showing up in cities
"bricks as in like bricks just sitting there?  in Manhattan there were just people and…"
2 hours ago

I looked at CNN this morning showing all countries protesting and it was like Finland, UK, Germany,…See More
3 hours ago
0 Comments 0 Favorites

cheeki kea commented on stormtruther's blog post And Just Like That the Fashionably Liberal Decided Killer Virus Was No Longer a Thing
"Virus concern Over. They make a mockery of their own covid fear, crap, and bullshit lies. So much…"
3 hours ago

cheeki kea commented on stormtruther's blog post VIDEO: Omaha Bar Owner Shoots Protester (Rioter/looter "He didn't see that coming")
"The man has the right to protect his property. An unfortunate outcome for the one that tried to do…"
4 hours ago

"https://www.youtube.com/watch?v=hFZFjoX2cGg ; They are cool and cute."
4 hours ago

Unbelievable ..Yes, I'm definitely not dreaming ,I checked, lol, seems a 2015 vision I had of a…See More
5 hours ago
1 Comment 0 Favorites

Jeroslav Pelikan is quoted as saying, “Apocalypticism ... was the mother of all Christian theology.…See More
8 hours ago
0 Comments 0 Favorites

Doc Vega commented on Doc Vega's blog post The Enduring Mystery of the Anasazi
"Chris, thanks for your support."
8 hours ago