Saudi Arabia, Turkey, and Egypt plan to join BRICS, and their potential membership bids could be discussed and answered at next year’s summit in South Africa, Purnima Anand, the president of the organization, told Russian media on Thursday.

“All these countries have shown their interest in joining [BRICS] and are preparing to apply for membership. I believe this is a good step, because expansion is always looked upon favorably; it will definitely bolster BRICS’ global influence,” she told Russian newspaper Izvestia.

The BRICS nations (Brazil, Russia, India, China, and South Africa) account for over 40% of the global population and nearly a quarter of the world’s GDP. The bloc’s stated purposes include promoting peace, security, development, and cooperation globally, and contributing to the development of humanity. 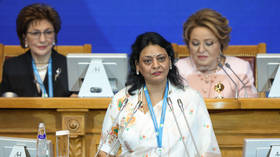 Anand said the issue of expansion was raised during this year’s BRICS summit, which took place in late June in Beijing.

The BRICS Forum president said she hopes the accession of Saudi Arabia, Turkey, and Egypt will not take much time, given that they “are already engaged in the process,” though doubts that all three will join the alliance at the same time.

“I hope that these countries will join the BRICS quite shortly, as all the representatives of core members are interested in expansion. So it will come very soon,” Anand added.

The news of the three nations’ plans to join BRICS comes after Iran and Argentina officially applied for membership in late June, with Iranian Foreign Ministry spokesman Saeed Khatibzadeh touting the bloc as a “very creative mechanism with broad aspects.”

Parrhesia commented on Doc Vega's blog post Donald Trump’s Dangerous Agenda? What Dangerous Agenda?
"Criticizing an ideology is not the same thing as expressing hatred towards a group of…"
1 hour ago

You should never ever try to block traffic on the autobahn...
3 hours ago
0 Comments 0 Favorites

Doc Vega commented on Doc Vega's blog post Donald Trump’s Dangerous Agenda? What Dangerous Agenda?
"FREEDOMROX in all Trump's embattled time in office all I saw was the positive good he was…"
21 hours ago

"Looks more like a Russian propaganda news release than an objective news item. Whatever,…"
21 hours ago

Less Prone left a comment for Gina Paulin
"Welcome to a revolutionary concept in public communication, the truth. Here the opinion is free."
23 hours ago

Less Prone left a comment for Stew
"Welcome to a revolutionary concept in public communication, the truth. Here the opinion is free."
23 hours ago

Less Prone left a comment for Tim Brown
"Welcome aboard Tim. I hope you find what you are looking for."
23 hours ago