To The Men and Women Who Serve In Harm's Way 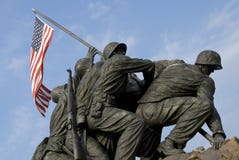 Veteran’s Day by most seems to mean barbecue, beer, and family get togethers on a weekend in November. It does little to invoke the true meaning of the holiday which is to honor those who served their country in the military. Even though our brave warriors serving in the Marine Corps, Navy, Army, Air Force, and Coast Guard are the only thing that stands between us and our enemies, few bother to stop and think of just how and why these brave men and women have honored their country with their sacrifices.

The world has a very short memory. It forgets easily that America liberated the world twice in the 20th century and acted as a global guardian for the regions in chaos in such police actions as Korea and Vietnam. The blood of American servicemen and women has been spilled all over the world in the unselfish act of preserving the peace of other nations yet many returning veterans have come home maimed and changed forever only to be met with indifference or even hostility by liberals.

Never the less, they still offer their lives so that we who often take for granted our freedoms can remain unharmed by the many hostile groups who would destroy America if they could. We owe a debt of gratitude to these brave people who fly into harm’s way, take up a rifle, or man general quarters aboard a destroyer in dangerous waters where enemy aircraft can appear out of nowhere and make high speed passes just to play a deadly game of cat and mouse.

Few people can remember just why the US Marines earned the nickname “Devil Dogs”. That term was carried proudly into battles from World War II to Desert Storm as a tribute to our troops who served in World War I and were surrounded on a hill in Europe by German forces. The horrific stalemate of trench warfare unfolded between Germany and France on the western front where thousands died on muddy fields pockmarked with shell craters and barbed wire. After 3 years of carnage in Europe and the Mediterranean theaters as Great Britain, France, and the Kaiser’s Armies fought a bloody war of attrition that seemed endless there seemed little room for hope. America finally entered the war determined to end the deadlock and bring peace back to the world.

Turning the tables of fate

In the dead of night and a lull in the fighting, US Marines found themselves isolated from supplies and reinforcements. Kaiser Wilhelm’s seasoned shock troops had encircled the Americans on a hill and were ready to wipe them out, but something happened. As the Germans quietly crept into their positions confident that they would show the US Marines just what kind of terror they had dished out to the British and French a psychological blow was dealt by fearless young men surrounded but not yet beaten.

The US Marines began howling like dogs in the tense but silent night that fell before battle. That ominous gesture unnerved the Germans and terrified them. One of the Kaiser’s troops called the US Marines “Devil Dogs” and the nickname stuck. The battle ended with the determined Marines breaking out from the German stronghold and defeating them. It appears the “Devil Dogs” label served as an omen to all who opposed them. If not for this kind of heroism displayed so many times in the years and wars to be fought in the future the US Marines would not have distinguished themselves nor would America have been defended so faithfully in desperate times. This singular incident only typifies just why a holiday like Veteran’s Day is so significant to the American heritage.