A Google search for ‘Sandy Hook United Way’ shows a cached page dated December 11, 2012, three days prior to the school shooting stating “United Way extends our most sincere condolences and prayers to all those families affected by the devastating events in Newtown/Sandy Hook, Connecticut. 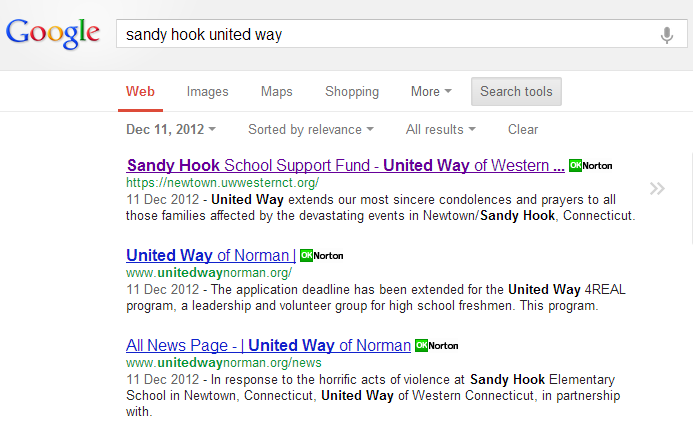 Below is an excerpt from that page:

United Way extends our most sincere condolences and prayers to all those families affected by the devastating events in Newtown/Sandy Hook, Connecticut. While the eyes of the world may be on Newtown/Sandy Hook, to several staff, volunteers and contributors, Newtown is home. We will stand with the community and everyone affected directly and indirectly by this tragic event as we face the days and weeks ahead.

Read other Articles related to the Sandy Hook shooting:

Sandy Hook Massacre: Multiple Suspects: What Happened to These Men? Who Are They?

This Is Insane: Coordinates for Sandy Hook Targeted in Batman Dark Knight Movie

How the Newtown massacre became a Mind-Control television event

Contributed by Ed Thomas of The Daily Sheeple.

Ed Thomas is a co-editor and contributor for The Daily Sheeple, an alternative media hub for leading headlines, head lies, opinion, and commentary. Wake the flock up!

This content may be freely reproduced in full or in part in digital form with full attribution to the author and a link to www.TheDailySheeple.com.

Permalink Reply by Central Scrutinizer on January 8, 2013 at 5:34pm

Holy sheep chit batman!!! If this is actual, here's your smoking gun on Newtown right there boyz & girlz ;)

Jane Standley is gonna be shit happy because now the pressures off her after 11 years....lol

"Until the federal government builds their Smart City, it looks like they are free of electricity,…"
24 minutes ago

steve replied to The One's discussion Hollywood Vampires? (Just NWO's Pedos)
"Not just children ,where do you think the thousands and thousands of pints of "donated…"
5 hours ago