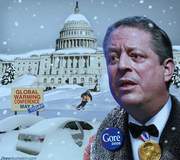 Gore Not Interested In Solutions To Climate Change That Don’t Line His Pockets
http://snardfarker.ning.com/group/globalwarmingclimatechangeforum/forum/topics/gore-not-interested-in

Retired climatologist Dr. Tim Ball joins us to discuss the significance of the recently leaked emails and documents from the Climate Research Unit at East Anglia University which expose deceit, duplicity and collusion between climate researchers to maintain the fraud of the manmade global warming theory. These emails reveal stunning behind-the-scenes details about how this fraud has been developed and perpetuated, and Dr. Ball shares his insights on what they show. For more information on this incident, please see the following articles from The Corbett Report and other sources: Hacker leaks thousands of emails showing conspiracy to "hide" the real data on climate change http://www.corbettreport.com/articles... The Death Blow to Climate Science http://canadafreepress.com/index.php/... Collusion, Corruption, Manipulation and Obstruction


Al Gore Admits CO2 Does Not Cause Majority Of Global Warming http://tinyurl.com/yzxe4gv


ABC website tells kids when they should die http://tinyurl.com/kl3ve5


Carbon Advice Group Plc is pleased to announce the appointment of Oliver Rothschild as its non-execu http://tinyurl.com/yfmxz3h

The Corbett Report recently sat down with Dr. Tim Ball, a retired professor of climatology at the University of Winnipeg to talk about Phil Jones and the Climate Research Unit. Here, two months before "Climategate" and the hacked emails, we talk about the highly secretive nature of the CRU at East Anglia. To read Dr. Ball's article on the subject in the Canada Free Press, follow this link:
http://canadafreepress.com/index.php/...

4) Alex Jones on Climategate Hoax of all time a global Ponzi scheme
https://www.youtube.com/watch?v=Yfo_mg...

2) Bell Tolling For The Swine Flu (Very on the money)
https://www.youtube.com/watch?v=OF_Btx...

4) WORLD POPULATION MUST VACCINATE BUT 1% ARE AT RISK
https://www.youtube.com/watch?v=EwYojt...

5) THE STRANGE CASE OF JOSEPH MOSHE and al
https://www.youtube.com/watch?v=on82ga...

Call For Independent Inquiry Into Climategate as Global Warming Fraud Implodes-
Paul Joseph Watson Prison Planet.com
Monday, November 23, 2009-
Calls for an independent inquiry into what is being dubbed “Climategate” are growing as the foundation for man-made global warming implodes following the release of emails which prove researchers colluded to manipulate data in order to “hide the decline” in global temperatures.

Former British chancellor Lord Lawson was the latest to demand an impartial investigation be launched into the scandal, which arrives just weeks before the UN climate conference in Copenhagen. “They should set up a public inquiry under someone who is totally respected and get to the truth,” he told the BBC Radio Four Today programme.

The emails were leaked at the end of last week after hackers penetrated the servers of the Climatic Research Unit, which is based at the University of East Anglia, in eastern England. The CRU is described as one of the leading climate research bodies in the world.

The hacked documents and communications reveal how top scientists conspired to falsify data in the face of declining global temperatures in order to prop up the premise that man-made factors are driving climate change. Others illustrate how they embarked on a venomous and coordinated campaign to ostracize climate skeptics and use their influence to keep dissenting reports from appearing in peer-reviewed journals, as well as using cronyism to avoid compliance with Freedom of Information Act requests.

As expected, the establishment media has gone into whitewash overdrive, characterizing the emails as evidence of “rancor” amongst the climate community and focusing on some of the lesser emails while ignoring the true significance of what has been revealed.

Organizations with close ties to the CRU have engaged in psychological terrorism by fearmongering about the planet with doomsday scenarios, illustrating their argument with outlandish propaganda animation videos which show pets drowning and others that show computer-generated polar bears crashing to earth in a throwback to 9/11 victims jumping from the towers, when in reality polar bear population figures are thriving.

“One of the emails under scrutiny, written by Phil Jones, the centre’s director, in 1999, reads: “I’ve just completed Mike’s Nature [the science journal] trick of adding in the real temps to each series for the last 20 years (ie, from 1981 onwards) and from 1961 for Keith’s to hide the decline,” reports the London Telegraph.

The author admitted to the Associated Press that the e mail was genuine.

In another example, researchers discuss data that is “artificially adjusted to look closer to the real temperatures”. Apparently, the “real temperatures” are whatever global warming cheerleaders want them to be.

As Anthony Watts writes, attempts to claim e mails are “out of context,” as the defense has been from CRU, cannot apply in this instance.

You can claim an email you wrote years ago isn’t accurate saying it was “taken out of context”, but a programmer making notes in the code does so that he/she can document what the code is actually doing at that stage, so that anyone who looks at it later can figure out why this function doesn’t plot past 1960. In this case, it is not allowing all of the temperature data to be plotted. Growing season data (summer months when the new tree rings are formed) past 1960 is thrown out because “these will be artificially adjusted to look closer to the real temperatures”, which implies some post processing routine.

Spin that, spin it to the moon if you want. I’ll believe programmer notes over the word of somebody who stands to gain from suggesting there’s nothing “untowards” about it.

Either the data tells the story of nature or it does not. Data that has been “artificially adjusted to look closer to the real temperatures” is false data, yielding a false result.

Yes it is a get rich quick scam and the public is the looser and Gore profits because of it. I refuse to support a corrupt politicians personal financial agenda and cant afford to if if I wanted to; which i don't. I am having some trouble making ends meat with my own finances (without the addition of carbon tax) to keep food on my table and to have my bills paid as it is.

The crusade led by Gore and his cronies is all about furthering their own careers and political agendas. Whats to gain? Power, controlling your 'carbon footprint', means controlling you, absolutely. 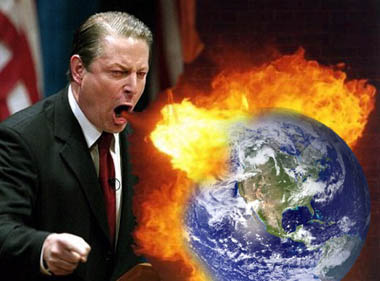 Rape, Murder, Chocolate Shortages: Is There Anything Climate Change DOESN'T Cause?

Anti-Science: Those Who Wish to Debate Climate Threatened with Death or Jail

First they cancel free speech, then they criminalize free thought.…Continue

At CIA, Climate Change is a Secret

When the Central Intelligence Agency established a Center on Climate…Continue

IntroductionThe release of embarrassingly candid emails from the Climate Research Unit (CRU) of the University of East Anglia has intensified, if not vindicated, suspicions that scientific misconduct…Continue

Turning Tricks, Cashing In on Fear

By ALEXANDER COCKBURNIn the early 1970s the UN spearheaded the progressive notion of a new world economic order, one that would try to level the playing field between the First World and the Third.…Continue

White House: Obama going to climate summit regardless of prospects

You need to be a member of Climategate - Global Warming Hoax Blown Wide Open - to add comments!

3 very important places to check out, 2 articles and a new site I heard about on the canadian radio yesterday. I beleive it is why they had propoganda news this morning on CBC saying 80% of canadians beleive in the lie. Must be because this new site went up.

I strongly urge you to visit and sign up if you can. FINALLY!!

Also, go read these to get a better picture of how this was done.

My latest letter to editor.

A little over a year ago, the hacked emails of ‘Climategate” scientists from the East Anglia Climate Research Unit, exposed the fraud of the IPCC’s “hockey stick” model and their need to “hide the decline” in global temperatures over the last 20 years.

Anyone who points out that there is no “scientific consensus” about global warming, I mean climate change, is labeled a planet killing “Denier”

Of course the real deniers are the ones who think there is no political or financial motive for people like Al Gore (whose carbon footprint is 1000 times larger than anyone you know) to fly around the world, proclaiming like Chicken Little, that the sky will fall unless we serfs give trillions of dollars to the Banksters and Gore in the form of Carbon Offsets, Taxes and Credits.

They say the earth is being killed by CO2 emitted from human activities, and,  that unless we “bankrupt” those wanting to build coal fired electric plants, as Barry Soetoro AKA Barack Obama famously said, we are all doomed to be buried in Ice Age snow, or alternatively, cooked alive in some Global Warming horror movie scenario.

You see?  They can have it both ways and blame it on your SUV.

If you thought derivatives were destructive to the world’s economy you have not seen anything yet.

Al Gore and David Blood (Blood and Gore) are partners in the Carbon Credit Trading Exchange, that will net them billions, if we let them pull off this ponzi scheme.

The jig is up. Anthropomorphic Climate Change is a fraud and a myth perpetrated to further de-industrialize America and impose One World Eco-Feudalism on us all.

In the mean time China is building over 500 coal fired electric plants and buying up the world’s oil fields.

CLIMATEGATE - Now the IPCC sexed up the Amazonian danger, too

CLIMATEGATE - Congress Went to Denmark, You Got the Bill

Comment by Christopher on December 19, 2009 at 10:02pm
Greg aka Sonatadude; I was much younger then too, and I do agree....GOVERNMENT as BIG as "THEY" get, will never be satisfied.

I don't vote for the NDP party, but I think the words of Tommy Douglas are inspirational, to say the least.

Comment by Christopher on December 19, 2009 at 8:29pm
Remember Global Cooling?

Why Scientists Find Climate Change So Hard To Predict.

In April, 1975, in an issue mostly taken up with stories about the collapse of the American-backed government of South Vietnam, NEWSWEEK published a small back-page article about a very different kind of disaster. Citing "ominous signs that the earth's weather patterns have begun to change dramatically," the magazine warned of an impending "drastic decline in food production." Political disruptions stemming from food shortages could affect "just about every nation on earth." Scientists urged governments to consider emergency action to head off the terrible threat of . . . well, if you had been following the climate-change debates at the time, you'd have known that the threat was: global cooling.
http://www.newsweek.com/id/72481

Venezuela President Hugo Chavez took the stage at COP15 and launched his own protest. He declared, "If the climate was a capitalist bank, the rich governments would have saved it."

Before linking the economic crisis to the climate one, Mr. Chavez's scathing critique invoked the ghost of Karl Marx and praised street protesters drawing some applause from the audience. He went on to criticize what he sees as the destructive practices of the capitalist system, Chavez said that he fears that the "infinite model" of capitalism will exhaust the finite resources of the environment.
http://www.informationclearinghouse.info/article24224.htm

Central Scrutinizer commented on Doc Vega's blog post Just Walk Away
"NP my friend, ya earned it...  ;)"
37 minutes ago