Toronto G-20 (fight back against the new world order!!!)

G-20 will be the largest security event in Canadian history exceeding the Vancouver Winter Olympics. This is a place to post articles, photos and videos related to G-20 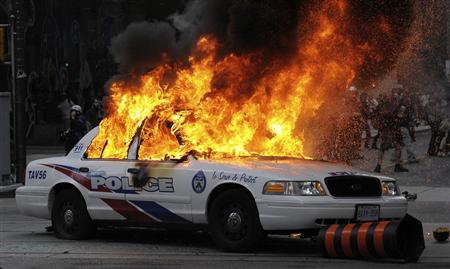 G20 'kettling' commander among 45 officers to be charged

Press For Truth On His New Documentary Into The Fire, G20 Police State!

Started by truth. Last reply by BarbaricFellow May 1, 2011. 1 Reply 0 Favorites

G20 Toronto Riots perpetrated by Agents Provocateurs of the Police

G20: Thought the phony arrests were over? Not for Charlie Veitch.

Personal Story: How I Ended Up In A G20 Jail

Rove in Toronto for G-20

Arrested for Putting Up Posters

You need to be a member of Toronto G-20 (fight back against the new world order!!!) to add comments!

Actually Larry how it works is that you are mandated to arrest someone in a domestic situation.  The amount of paperwork which is required to be filled out when at a domestic with violence and no arrest is made far outweighs what one has to do with an actual arrest.  Ergo does not matter how many get hauled into the jail house after the domestic call as long as someone does.

Traditional marrigage, gay, lesbian marriage, don't matter.  Violence, police get called, you can bet your bottom fiat currency that one or more are going to be guests of the city.

It's all business.  Arrest for the cop, means doing their job, hopefully at least one off duty court appearance which means either time and a half cash or time in the book.  Asst. Crown gets a fuller docket so they can complain about too much work which means more money next contract, judge gets more money 'cause they have fuller docket and too much work, legal aid or private practice lawyers gotta get paid, social workers, newspaper reporters, well you can see where I'm going.  It's a money machine.

Getting arrested is just another business tax.  What's not to understand?

By the way in your scenario I'd have arrested both man and woman.  Woman for assaulting man, man for something which I could easily enough find.  Two arrests, two court cards, double the money.

For too long the Toronto Police Service has believed that their 'Intelligence Bureau' is the final authority on what is fact and what is fiction.  Over the years I had a number of run ins with the 'super snoops' regarding assessments, observations, and conclusions which flew in the face of well reasoned, evidence supported and verifyiable facts.

Intelligence Bureau always won out, although their arguments were based on spirious facts, paranoia, and twisted logic.

Remember the old computer axiom 'garbage in, garbage out'.

I think that if their is ever an honest assessment of the whole sorry mess, (something which knowing the department, knowing Blair in a work relationship, and knowing the cover your ass when all else fails mentality with Toronto, (or any law enforcent orgainzation probably), then the real pile of doggy do can be laid at the feet of the intelligence services.

The Public Works Protection Act RSO 1939, uniform officers acting as thugs against persons walking along a public street, and all the other sorry mess arises out of the Intelligence Bureau, it's mandates, close relationships with the RCMP, OPP, Intell., and CSIS.

Billy, remember, be careful what you asked for, 'cause it just might come to pass.

At least you got pensionable time in.

Comment by Doug Singleton on December 2, 2010 at 10:30pm
During bike week in Daytona Toronto Intell. sends down along with O.P.P. and some of the regional services guys to spy on Cdn. bikers partying in the sun.
They get deputized by the U.S. Marshall Service so they can be law enforcement officers during their intell. time in the state of Florida.
Adios.

Comment by Doug Singleton on December 2, 2010 at 10:26pm
What ever went down Billy Blair knew full well. Worked with and for the guy years ago, he's a typical chief.
Adios.

Comment by Doug Singleton on December 2, 2010 at 10:23pm
Uniform no. U/C, (undercover) sure their had to be spooks from all over the world at the place. Least anywhere the G20 parasites come from. As for uniforms I would believe, (can't always get what you want though) that they were from all over Canada.
As for Toronto not wanting to get involved, Lawrence think this through with me; Police are as beaurocratic as any other sniviling service and they certainly would not pass off any opportunity to strut their stuff in their own city.
Adios.

Comment by Doug Singleton on December 2, 2010 at 9:38pm
Thirty years ago the P/S's and Staffs would have torn a new rectum for anyone caught taking off the cap badge, and the U.I.C. would have docked buddy four hours. Gutless wonders running the job now.
Adios.

Comment by truth on November 27, 2010 at 3:31pm
G20 cops cleared of brutality charges because they couldn’t be iden...
Toronto Star | On Thursday, the agency announced no charges will be laid against police officers for injuries to civilians during the G20 protests.

cheeki kea replied to MAC's discussion What the WEF just said at Davos is TERRIFYING, and we should all pay attention | with Clayton Morris
"https://expose-news.com/2022/05/23/human-battery-a-new-source-of-green-energy/"
10 hours ago

cheeki kea favorited MAC's discussion What the WEF just said at Davos is TERRIFYING, and we should all pay attention | with Clayton Morris
10 hours ago