Imagine that President Obama could order the arrest of anyone who broke a promise on the Internet. So you could be jailed for lying about your age or weight on an Internet dating site. Or you could be sent to federal prison if your boss told you to work but you used the company's computer to check sports scores online. Imagine that Eric Holder's Justice Department urged Congress to raise penalties for violations, making them felonies allowing three years in jail for each broken promise. Fanciful, right?

Think again. Congress is now poised to grant the Obama administration's wishes in the name of "cybersecurity."

The little-known law at issue is called the Computer Fraud and Abuse Act. It was enacted in 1986 to punish computer hacking. But Congress has broadened the law every few years, and today it extends far beyond hacking. The law now criminalizes computer use that "exceeds authorized access" to any computer. Today that violation is a misdemeanor, but the Senate Judiciary Committee is set to meet this morning to vote on making it a felony.

The problem is that a lot of routine computer use can exceed "authorized access." Courts are still struggling to interpret this language. But the Justice Department believes that it applies incredibly broadly to include "terms of use" violations and breaches of workplace computer-use policies.

Breaching an agreement or ignoring your boss might be bad. But should it be a federal crime just because it involves a computer? If interpreted this way, the law gives computer owners the power to criminalize any computer use they don't like. Imagine the Democratic Party setting up a public website and announcing that no Republicans can visit. Every Republican who checked out the site could be a criminal for exceeding authorized access.

If that sounds far-fetched, consider a few recent cases. In 2009, the Justice Department prosecuted a woman for violating the "terms of service" of the social networking site MySpace.com. The woman had been part of a group that set up a MySpace profile using a fake picture. The feds charged her with conspiracy to violate the Computer Fraud and Abuse Act. Prosecutors say the woman exceeded authorized access because MySpace required all profile information to be truthful. But people routinely misstate the truth in online profiles, about everything from their age to their name. What happens when each instance is a felony? 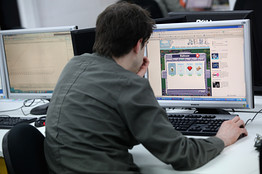 In 2010, the Justice Department charged a defendant with unauthorized access for using a computer to buy tickets from Ticketmaster. Ticketmaster's website lets anyone visit. But its "terms of use" only permitted non-automated purchases, and the defendant used a computer script to make the purchases.

does this apply to FBI agents who pose as someone else to "catch" people doing something that, in their imagination may be construed as "wrong"?

Permalink Reply by 2p4plpyayj8y3 on September 16, 2011 at 12:03pm
This is the insanity of the Police State! You call this a happy medium where everything balances out? Does this apply to the Feds who think theyare above the law?

Good, the that makes all of the government Felons. Oh wait, the upper officials have diplomatic immunity don't they.  Sooo, my thoughts then would be why are they entitled to taxpayer's money if they hold no allegiance to this country?What about the police who say that they are no obligated to tell the facts of what they can actually say and do? Is 1/2 truths a lie also?

Permalink Reply by noblsht on September 16, 2011 at 3:34pm
Thanks James, for posting this story and keeping us informed, the majority of the brain-dead American population have no idea of the implications of  this type of reckless legislation!!!

Permalink Reply by Ron on September 16, 2011 at 4:09pm
Thanks James, for posting this story and keeping us informed.

Permalink Reply by Robert Carobene on September 16, 2011 at 11:03pm
They want to censor us all on the Internet!

Permalink Reply by Robert Carobene on September 16, 2011 at 11:49pm
The time is coming with Internet ID  for  everyone that goes online and they will follow all our moves as for me they will block me left and right from trying to destroy the Illuminati!

internet id will be programing for the next step. the chip under the skin. they have achieved reality threw social networks. people feel at one and united threw this medium. but all friends are miles away.

oh yeah, that's how to get rid of facebook.

Doc Vega commented on Doc Vega's blog post For Those Who Fight Evil
"Ha ha Good One cheeki! "
6 minutes ago

Less Prone commented on cheeki kea's blog post "I Am Taking This Very Seriously": BlackRock's Larry Fink Struggles With Demonized ESG narrative.
"Where did they get the name Blackrock for this company and how does it relate to their values? The…"
1 hour ago

Gail Jones is now a member of 12160 Social Network
3 hours ago
Welcome Them!

cheeki kea commented on Doc Vega's blog post For Those Who Fight Evil
"Brains of sheep moving to slow. Lower IQ begins to show, mass immigration diluting the nation, of…"
5 hours ago

"First you see the Nordic ladies in their beautiful costumes and then you see IT. Looks like Finland…"
6 hours ago

cheeki kea commented on tjdavis's blog post Canadian Government Asissting Suicide
" Oh wow That was really said. " Trained to Eliminate those that are suicidal" Not a…"
8 hours ago