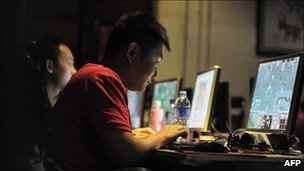 More than one million websites closed down in China last year, a state-run think tank has said.

The Chinese Academy of Social Sciences said there were were 41% fewer websites at the end of 2010 than a year earlier.

Chinese officials have tightened regulations on the internet in recent years, and they launched a crackdown on pornography websites in 2009.

The academy's researcher said there was no link, insisting China had a "high level of freedom of online speech".

Liu Ruisheng said that despite the declining number of sites, the number of web pages had risen to 60 billion during 2010 - a 79% increase on the previous year.

"This means our content is getting stronger, while our supervision is getting more strict and more regulated," he said.

Civil rights campaigners have long railed against China's web censors, who impose controls known as the Great Firewall of China.

Doc Vega commented on youhavetoforgiveme's blog post I'm preaching to the choir for the regulars here at 12160.info but.....
"Great commentary Cheeki! I wrote about this back in 2012. The big question why were there also well…"
16 hours ago