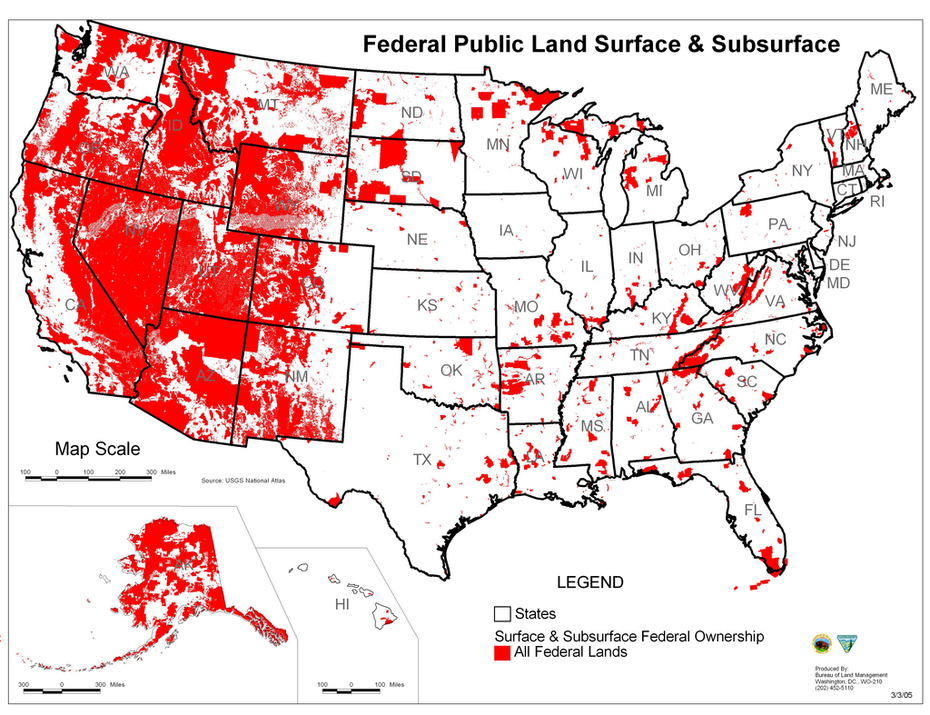 Wherever you see a politician or lobbyist who is in favor of transferring public lands out of the federal domain, you will likely see a certain map created and is distributed by the American Lands Council, a Utah-based group that is dead-set against the federal land estate.

The map shows much of the West in blood red ink, according to ALC illustrating the vast reach of the federal government.

Compare the map with a similar one produced by the U.S. Geological Survey. It shows the same acreage, but with colors coded for military bases, wildlife refuges, Indian Reservations and national parks and forests. The brown, tan and light green of Fish and Wildlife Service, Bureau of Land Management and National Forest land tend to be of highest consequence for hunters and anglers, and are also the lands first targeted by ALC.

However, the Constitution does not authorize permanent land-grabs by the federal government. It authorizes Congress to make “all needful Rules and Regulations” pertaining to land. ‘Needful’ was a word carefully chosen to indicate that the regulatory power only expanded to powers specifically enumerated in the Constitution. The feds were expected to sell off non-essential land and distribute the subsequent monies in ways that benefited the public good such as paying off the debt or tax cuts.

The current regime of federal land management is blatantly unconstitutional. The founding fathers never intended to create a Republic where the feds could impose draconian fees on peaceful individuals and force them from the land. As a matter of fact, that is exactly the arrangement that the Constitution was written to prevent, as it clearly violates the principles of fiduciary government, sympathy and independence.

So you think the Federal Government and military industrial complex should own so much land? Once it's designated Monument status you can't use it at all not for cattle grazing, recreation, or any public service and that's part of the Agenda 21 plan!

Any way we can get the U.S. Geological Survey map imported on top of this map you’ve listed?

thanks for sharing though!

Agenda 21 in a nutshell. I've read about this a while ago but it is still relevant today and, may help explain the Federal Land Map.

"The question is who owns the world?"

Anyone can own the World, until someone else takes it from them.

Federal, That means the People own it. No sales to anybody without a vote with ballots that can be verified by citizens who already have been. No collateral. No lease. No sale. No problem.

What’s wrong with this nation, we are brainwashed, to call “America” -this nation is run by a criminal mafia of Lawyers, all Lawyers, all the time, Lawyers, nothing else, a bunch of Lawyers, doing all they can to serve their Master's and get for themselves their children and friends all the wealth of this nation, they can steal.

No need to tell me, Trump, is not a Lawyer, others, a very few, are not Lawyers, but I know, the vast most are Lawyers and these Lawyers do run the show in the District of Columbia, a Rothschild Corporation.  I know the Lawyers running the show are professed to be Christians, whatever that word christian means, I know most of the face out front is Christian, but behind the mask, Jews, are dealing the cards and deciding the game, so we, the people, are always playing with a stacked deck, a crooked game, the dealers Jews, and, interested only in the wants and needs of other Jews, and, what the Lord God, King, of the Jews, Rothschild, wants.

These Lawyers, every one of them knighted by the Queen of England, having passed the BAR, as in Bar Mitzvah, playing Maritime Law, and, deceiving we, the people, with their every trick and legalese, known only to them and their masters, the Jews, the King of the Jews, Rothschild.  Since these same criminals are also the Judges, they do what they want and get away with it, though too often the logic is missing, the meaning, concealed.  When Politician and Judge are from the same coil of snakes, we, the people, have no help, we are just in the way, so, they intend to get rid of us, most of us.

“If the evidence is correct and no logical errors have been made, a 13th Amendment restricting lawyers from serving in government was ratified in 1819 and removed from the U.S. Constitution during the tumult of the Civil War. Since the Amendment was never lawfully repealed, it is still the Law today. Sep 7, 2016”

Lawyers, how do we get them out of our business and in the jails, where they belong?

Good point. The question is who owns the world? Always same old story...

My wild-ass guess would be that the red areas are collateral to cover our foreign loans. This land will be surrendered in the event we cannot repay our loans... regardless of who currently lives on or, borders this Federal Land.

Do people actually think the USA could secure $trillions in foreign loans without collateral?

Realistically, the Government doesn't have to take your land -- they only have to make it cost prohibitive for you to own it.

I remember watching a short clip where an Indian asked Government official claiming all the land : "Did you buy it? Did you trade for it?"

"Carry your weapon with you in public places, seems to work for me. Here in Low IQ redneckland Va,…"
35 minutes ago

"The road to Zimbabwe"
6 hours ago

WHO Cares What Celebrities Think - #PropagandaWatch

SHOW NOTES: https://www.corbettreport.com/?p=37227 WHO cares what celebrities think? WHO cares, that's who! Or, more to the point, WHO wants you to care what...
6 hours ago
0 Comments 0 Favorites