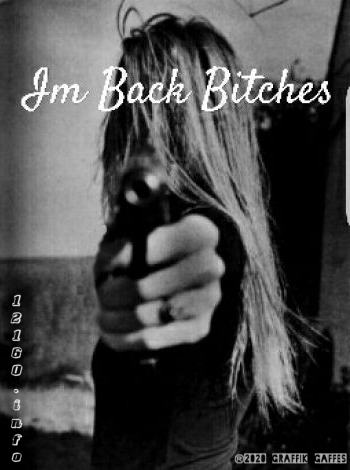 Yeah, I know...who cares?...lolz ...w00t! Glad to see this place again, glad it's still here, been so long off these constantly-connected binary-computating devices, I is gonna have to lernz Winblow's all over again...NOT!!  Where's my linux mint box dammitt???

Well after an over extended, totally un-forseen, ...ummmm...break???.... vacation??  escape??? ...away from absolutely EVERYTHING including from myself, so just a note to say I am now back on the grid apparently, lmao. When I say EVERYTHING, I mean EVERYTHING... Internet, double cheese burgers, computers, my dog, gov't tracking devices (makes-U-not smart-phones) motorcycle, weed, V+OJ, people, think I even missed a weather season here (Fall) D'ohhh!

All I is gonna say is,

Mental shackles fookin Suck...especially if your not the 1 with the key. Somebody had to go, but I didn't think, in the end, it was going to be ME ;)  But it was a moral imperative for me mentally because I was at the desperate point of contemplating sum fuctup shit in order to cut this certain Succubus's life-sucking tentacles off me once and final. Problem was i don't have that "killer instinct" to want to fak up another person, ..offensively anyway. So this internal mental back & forth, ping-pong battle of literally, Good vs Evil, was exponentially taking over my every day thoughts now, Not Good, at night laying in bed's one thing, but now ya fookin up my dailys biiotch.  All's good now, the psychopath is no longer anywhere near here (& stating now, I had nothing to do with it's disappearance..lol)

Funny thing is that the remedy wasn't even planned, nor had I even had a plan yet, it just kind of fell into place, + making a couple good judgement calls imo, it turned out OK  I took an unannounced self-imposed 90 day leave of absence from it ALL. Thank You Mr. Tucker

Well,.... almost 90 days lol, I cut it short because I didn't want to miss out on State of Virginia's biggest planned Patriot Party to date, coming up here this coming Monday, Jan 20th about 60 miles from here .... w00t!! Seems falsely elected, + illegally selected Guvnah Blackface Northam is having a fancy Meet-N-Greetz on the State Capitals grounds with a few hundred thou, gun-totin', law-abiding Va citizens and others from neighboring States on MLK's, Fed-appointed, "Just Keep On Dreamin' Day"

I was NOT going to miss this historic event going down next town over dammit. so far I've got 3 folks who, after hearing Trumty-Dumpty for the past 3.5 years, their eyebrows are finally, rising up w/ that, "HUH?? WTF?" look ...lol, ...I think they're in for some serious political culture shock my friends. Told 'em, stay away from anyone openly raising hell, looking for machine guns, grenades, weapons or wanting to make/buy/steal incendiary's to blow-up buildings and start chaos and shit for those ones are your FBI and CIA plants and shills trying to infiltrate their way into militia's, and conservative groups by disguising as an "American Patriot" against "The Man"

Also, don't wander off ALONE, may never see ya again if they drag you away to a secret basement gulag with no Miranda rights or bail or fone call for long long time. I've heard rumors that the local Anti-Fa group here is coming too..... but supposedly with a plot twist here, seems they're also against this dumbass, pointless, not-happening, tyrannical, gun-grabbing attempt by Ralphy-boy.

So what??... conservative righty's hand-in-hand with Anti-Fa fooks????... hmmmmm, I dunno if thats happening in real time or just local redneck rhetoric , guess we shall soon soon see.Sadly can't be toting or transporting any guns there, this spine-less chicken-shit libtard put in a State of Emergency Thursday, then yesterday implemented another "bill" that all Baseballs, baseball bat's and any sport-type objects that can be hand launched are now temp banned,...WTF? talk about lunatic libtards... lolz...Think ol Ralphy boys scared??, ...Let's hope so... this delusional wannabe "King" needs to have the full fear and wrath of We, The People on his narrow ass because in reality, here's your REAL Traitorous, Treasonous Felon because trying to circumvent the number 2 Supreme LAW on the list of amendments that make up the ultimate rules some call, America's Supreme Law of The Land or better known as...

So arrest that impostor bastard now officer... wish it was that EZ

Well enough babbling for now, still trying to take inventory, put dog on a serious diet, (somebodys obviously overfed his fatass) turning chit back on, turning myself back on. bulldoze the old shit, rebuild the new shit, clean a few guns, start a new crop, catch up on South Park Season 21, stay permanently single, make a couple tasty black russians, u know all the important chit ...etc LMFAO! But I'm here again to annoy and piss off the masses as usual ...lolz

PS: Anyone traveling out of State that is planning on being here in Richmond Va for Mondays event and your early or need a place to rest/smoke/chill/meditate/strategize, etc before the big show, I live alone in a furnished 5 bedroom house... (5 - 1 = 4 left) No Charge, tips not necessary  and also, the Shuttle-Dodge is leaving the driveway 6am, Monday morning if somebody close by needs transpo, Future Felon Blackface's Party Palace is about 45-50 mins away ...nuff said!!

Hi CS , Glad you made it back, it's good to see you again. You're a funny one at times.

Doc Vega commented on Doc Vega's blog post Robot Companion Coming To Your Town Soon
"One final thought. I hope the Feminists eat their hearts out over this as they have indeed brought…"
38 minutes ago

James Roberts commented on stormtruther's blog post Numerous reports in the Arab press have accused the US and Israel of being behind the creation and spread of the deadly coronavirus
"I wouldn't have any problem believeing this. Used to read the Tehran Times regularly. I'd…"
3 hours ago

"Things have a way of working themselves out, eventually. Jordan Peterson said in all his years of…"
3 hours ago

"ZOMG! It has come to pass! Shelter in place, everyone!"
3 hours ago

"Banksters are going down, and it's happening everywhere. Hold on to your coupons by keeping…"
4 hours ago

Economist John Adams and Analyst Martin North examines recent changes to the terms and conditions from our major banks. Have you read yours recently? https:/...
4 hours ago
2 Comments 1 Favorite