Who burned the homeless camp? Antifa and Infowars play the blame game over Austin riots

Who burned the homeless camp? Antifa and Infowars play the blame game over Austin riots 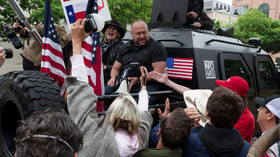 A mob of rioters set a homeless man’s belongings on fire in Austin, Texas, and trashed his encampment. The Left then claimed the heinous act was the work of conspiracy site Infowars, but Infowars’ reporters say otherwise.

As rioters clashed with police and set cars on fire in Austin on Sunday, the mayhem touched an often-forgotten segment of the Texan city: the homeless. Video footage shared on social media showed a homeless man’s mattress and belongings being dragged into a fire by rioters, as a camera crew from conspiracy site Infowars filmed the carnage.

According to one self-described “anti-capitalist” and “anti-fascist” activist, the blaze was started by the Infowars team, so they could film it and frame the left-wing rioters for the act.

An InfoWars crew here in Austin set fire to a homeless man's belongings and shared their despicable act through various social media accounts in an effort to demonize protestors, who I know for a fact would never do this.
Note at the end, he's shouting directly at the cameraman. https://twitter.com/bigleaguepol/status/1267213348736847873 …

Rioters cheer as this homeless man’s belongings are set on fire in Austin.

This is heart wrenching. 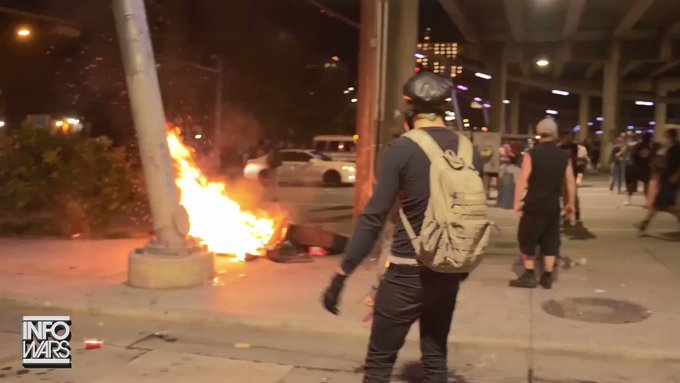 28.6K people are talking about this

Commenters zoomed in on the pixelated head of one of the arsonists, and claimed his hat was emblazoned with Infowars’ logo. However, it’s impossible to tell from the grainy footage.

But there was more to the story. Infowars’ cameraman told the site that he had started filming when he noticed Antifa dragging people from their cars on the I-35 highway. His assistant, Savanah Hernandez, then released a video showing multiple angles of rioters gathering up material from the homeless encampment and setting it alight.

People are trying to blame the destruction of the homeless people's property on Infowars.

Here are multiple angles of rioters stealing from and burning the property of the homeless throughout the night and starting fires near their camps.

1,076 people are talking about this

In one bizarre and depraved scene, protesters pause to take selfies next to the destruction.

Alex Jones, the iconoclastic polemicist behind Infowars, has promised to file defamation lawsuits against the Twitter users supposedly smearing his site. Until the case is brought to court – an unlikely possibility – the true series of events on Sunday night is unknown, lost in the fog of unrest.

The same kind of blame game has played out all across the country over the six nights of riots and looting that followed the death of George Floyd in Minneapolis, Minnesota, last Monday. Democratic officials have blamed “white supremacists,” “drug cartels,” and even “white men” in general for stoking the lawlessness, while conservatives and the Trump administration have blamed Antifa and the “radical left.”

Only a Soros funded mummys boy could do anything so cruel, none of those protesters know what it is to be homeless, those belongings are all these people have got

"If were not careful we will wind up like the Indians, that looks like the globalist plan"
3 hours ago

"James, Buddy I'm not too sure I would have ever recommended the Fuehrer for a leadership…"
5 hours ago

Black Crime Matters - A Comprehensive look at Black Crime and the Future of White America By Emily Youcis 2020 https://www.bitchute.com/video/qmVNfukCTLa9/
8 hours ago
0 Comments 0 Favorites

"It's issue #9 that creeps out my radical leftie Govt. of Their cold hard truth from the past,…"
11 hours ago

Phyllis Maka commented on Phyllis Maka's blog post BLOODY ISRAELIS WILL HAVE THEIR STICKY BEAK IN THIS FOR SURE!
"More junk litter!"
12 hours ago

cheeki kea commented on Phyllis Maka's blog post BLOODY ISRAELIS WILL HAVE THEIR STICKY BEAK IN THIS FOR SURE!
"ha ha, and that must be why they turn out be be a disaster, plenty of well wishes, thoughts and…"
13 hours ago

"The camps are emptied hotels now. Rooms are isolation units of compulsory confinement and all…"
15 hours ago

"I have something for you to read…"
16 hours ago