Nancy is Now Playing “Commander in Chief” By Addressing The Troops…...

A photo of Nancy Pelosi addressing the troops has gone viral for all the wrong reasons.

The establishment wants you to feel deeply sorry and remorseful that a bunch of elitist, tyrannical politicians were scared and hiding under their desks.

Meanwhile, during the “Summer of Riots,” most of the people who were just cowering under tables inside the Capitol said nothing to end the brutal attack on American small businesses and people’s homes.

But again, you must feel deep sorrow and anger for the plight of the filthy-rich politician.

Sometimes it took weeks for Dem politicians to even consider bringing in the National Guard to protect American homes and businesses from radical left-wing rioters. sometimes they refused to do it all together. But the very second the rich and all-mighty politicians are scared, the entire force of the federal government comes crashing down.

Thank goodness these cherished men and women – these national treasures – are watched over and safe. Thank GOD.

Now, the DC Capitol looks like some dystopian freak show, with National Guard sleeping on the floor of the Capitol. 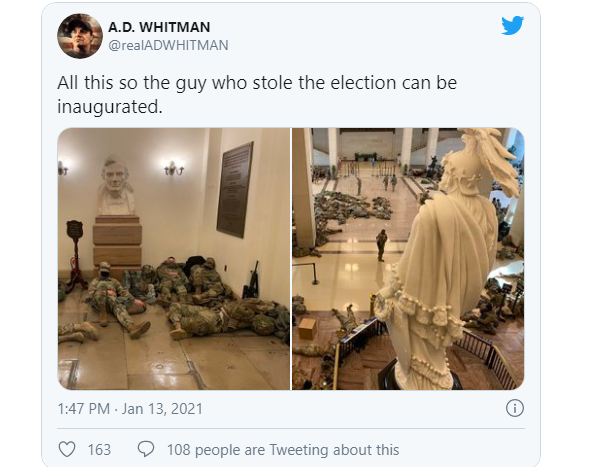 Nice how we can’t even get cots or sleeping bags for these poor people.

And to make matters even more “China-like” we now have the shaky old Speaker of the House standing outside, “Xi-style” addressing the troops. 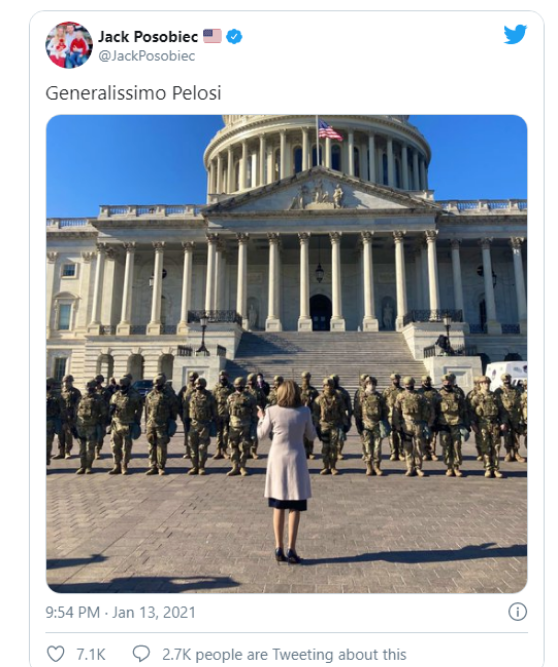 The photo went viral, but for all the “wrong” reasons. Here are some of the responses:

“She’s acting as if she’s commander in chief.”

“Majority of those heroes likely despise her.”

“This is an absolute disgrace to the men and women in uniform.”

Standing at attention for boozie”

“I do have questions and concerns over why she, or any member of Congress would feel the need to address troops here”

“I hate that they have to stand at attention for the evil witch.”

“This is Cersie Lannister.”

“Don’t Cry For Me San Francisco!”

“How many people does it take to find a pair of dentures?”

“What an absolutely embarrassing disgusting photo.”

The left is literally drunk with power right now, and things will get worse before they get better…and yes, they most certainly will get better.

shes a official bitch.  i hate her and hope she goes to hell where she comes from!  see like its real sad what happen to these ppl.  first they burst into flames and then torn apart then it happens over and over again.

Marine Corps. Rebukes Pelosi: “WE DON’T WORK FOR YOU!”

A Pentagon source speaking under promise of anonymity told Real Raw News that Pelosi contacted Gen. Berger late Monday night, and she beseeched him to commit 5,000 troops to help ensure a peaceful transition of power and to prevent a repeat of the Jan 6 siege of the Capitol. Gen. Berger, our source said, didn’t understand why Pelosi needed additional soldiers to augment an already impressive force assembled by federal and state officials. That force includes 15,000 National Guard from D.C., Delaware, Massachusetts, and Rhode Island, and an undisclosed number of FBI and DHS agents who arrived in D.C. Sunday night.

Pelosi said she wanted “battle ready” reinforcements because “radicalized Trump supporters and kooky Qanon conspiracy people” were about to converge on D.C. She implored him to reconsider, arguing that it was the general’s patriotic duty to quell uprisings and guarantee Biden’s ascension to the Oval Office.

Her statement made the general explode, our source said.

“Don’t lecture me on patriotism, Madam Speaker. I’ve served this country with distinction for 40 years. I’ve spilled blood for our nation. What have you, a self-serving elected official, done for your country?” Gen. Berger said.

Pelosi further enraged him by saying he was answerable to Congress.

“I answer only to the president, and as I understand it, Donald J. Trump is still president and commander-in-chief. I abide in the Constitution as it was written, not your interpretation of it,” Gen. Berger admonished Pelosi.

Quoting our source, “When her intimidation tactic failed to sway Gen. Berger, Pelosi tried a different tactic: Begging and flattery.”

Pelosi claimed that the National Guard’s “weekend warriors” were ill-prepared to repel an army of “mad Trumpists.” Battle-hardened marines, however, were more capable of defeating “rabble rousers,” she said. “You have the best trained soldiers in the world, and America needs them.”

Gen. Berger was unmoved. The only way Marines would be deployed, he told her, was if President Trump himself issued that order.

“If you want us to help combat his supporters, I suggest you get him on the phone and tell him that. If he orders me to, I will. Otherwise, I suggest you listen really hard to the words escaping your cracked, poisonous lips; they’re tantamount to treason,” Gen. Berger allegedly told her. 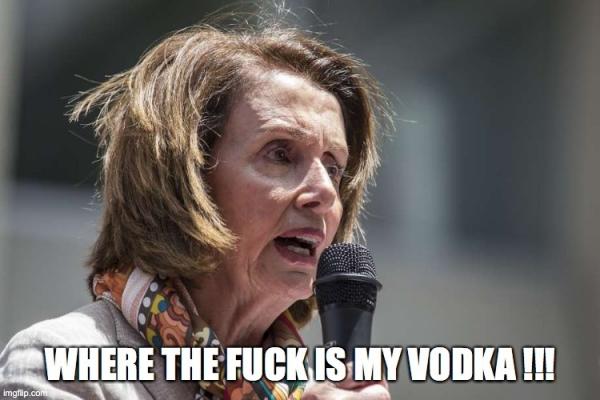 ""O frabjous day! Callooh! Callay!"  I know the answer the next day."
4 hours ago