I think I know the reason
It's just the witch's season,

If I could dig these memories right out of my head
With a knife I'd might be relieved instead
Seems I was so easily misled
Why thank you Mam I feel dead,

Took a trip down to Shanghai town
Just thought I'd fool around
God must have known and let me down
So some other woman wouldn't make me drown,

The food was good the place was strange
My impressions were rearranged
Now alone I'm just laying here
Way beyond those tears,

There's nothing sacred in the world
Her hair's not even curled
She's been gone a long time now
Just another shot across my bow,

it all becomes just another sad joke
Bleak as the Grim Reaper's cloak
I used to think I was a fair bloke
Seems like it's all just mirrors and smoke,

I tkink I know the reason
It's just the witch's season,

I'm not like you because I often look back
But don't mind me it's just an emotional attack
This pain I know seems to keep me on track
It's just not that easy getting a stranger in the sack. 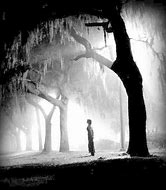 cool, I used to like listening to supertramp "Its raining again" when i felt like that, hope the clouds clear soon my friend

Fat Freddy's Cat Yep all poems on my blog are mine yes. Thank you for asking.

Thank you Raz Putin every poem you see in my blog I've written myself.

did you write that Doc?

Less Prone favorited Doc Vega's blog post How Disinformation has Been Used to Change our Modern Society We Were Warned a long Time Ago!
40 minutes ago