Again Police Evidence Proves False - in case that sparked off the 2011 Riots in the UK! 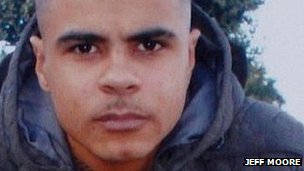 Mark Duggan was shot dead by police in Tottenham, north London, on 4 August 2011

An Old Bailey jury heard in court today that according to the Home Office pathologist  Dr Simon Poole, the injuries on Mark Duggan’s body were impossible to have been inflicted according to the police version of events.

Dr Poole was testifying in the retrial of Kevin Hutchinson-Foster, who denies supplying an illegal gun to Mr Duggan the day he was shot.

Although unable to say what order the bullets were fired, a post-mortem proved Mr Duggan had bullet wounds to the chest and upper right arm, with the fatal shot to the chest entering the front right hand side and exiting the back of Mr Duggan on the left hand side.

The other bullet entered the right upper arm and tracked down a few centimetres under the skin, before exiting the arm and grazing the skin of the chest.

Stuart Denney QC, barrister for Mr Hutchinson-Foster, asked Dr Poole to imagine a scene in which Mr Duggan had got out of a minicab and was heading towards a wall beside the road while a police officer had got out of a car behind the taxi and was standing on the pavement.

Mr Denney suggested that if the police officer fired the shot that struck Mr Duggan in the chest, the track of the bullet would have to pass from the left to the right.  He asked the pathologist: "But in fact the chest wound is right to left?"  "Yes, that's right," answered Dr Poole

It’s said it was the police’s handling of the case that contributed to full scale rioting that hit the towns and cities in the UK in 2011, costing the tax payer well in excess of £160,000,000.

The Duggan family who have always denied their son Mark was in possession of a gun, are just members of another family who have been deliberately lied to and deceived by the police.

It raises the question as to how many other cases have pathologists found evidence that contradicts the police version of events?

Like that of the Hollinshead family, when it was alleged Sabina Eriksson murdered Glenn Hollinshead, stabbing him four times and only 72hrs after her and her twin sister Ursula were first caught on camera in May 2008 dashing out into the oncoming traffic on the M6 motorway, with Ursula being ploughed down by a 40 ton lorry, alongside Sabina being knocked into the air like a rag doll as she dived into the path of a hurtling Silver VW Polo.

Had that case had the opportunity to have been heard by a jury, then they too would have heard pathologist Dr Shorrock state: “...the wounds are all consistent with having been caused by a knife.  The ‘only one’ whose dimensions are likely to accurately correspond to those of the causative weapon is (No2).” ‘...the only one’ being wound No 2, is the wound to the heart.  He clearly highlights there must have been more than one knife was used to kill Mr Hollinshead.

Though according to the author of the book; A Madness Shared by Two, there is further evidence that indicates Sabina is more than likely innocent of Mr Hollinshead murder and that someone else actually killed him, thus the killer/s are still at large. [2]

The Hollinshead family are currently seeking legal action, for it’s also being claimed there has been several cover-ups involving the Staffordshire police, the University Hospital of North Staffordshire [UHNS] and the pathologist Dr Kolar who acted for the prosecution.

It was Dr Shorrock who acted for the defence and who carried out the second post-mortem on the body of Glenn Hollinshead in June 2008.  This evidence wasn’t discovered until recently in August 2012, it was never produced or heard in court.  After 16 months of maintaining her innocence of murder, Sabina eventually pleaded guilty to ‘manslaughter’, due to ‘diminished responsibility’ and received 5 years in prison. She was released after 2½ years and then returned to Norway in early 2011.

Despite the twins crazed actions and that they were first arrested under Section 136 of the 1983 Mental Health Act, this crucial evidence was then edited out [3] of the BBC Madness in the Fast Lane [4] documentary in 2010, so was also never known about by the millions or people who have watched this film.  More importantly the Hollinshead family never knew of its existence and until the author presented it to the family. [3]

The edited out footage that proves the Eriksson twins were arrested under Section 136 of the Mental Health Act.

The book further suggests she was embroiled in a ‘drugs’ ring and had been under police observation at the time of the M6 incident and why she was released from hospital only after 5hrs following the M6 incident. The author claims it very likely a “deal” with the police took place and that Sabina probably informed on other she was involved with.  It’s always been alleged Sabina went on to meet Mr Hollinshead after a “chance encounter” in the street and that she ended going back to his house along with another man and where it’s claimed she then stabbed and killed him; however, the book proves this wasn’t the case.

Chris of the family Masters favorited Aaron's blog post Photographed at London Gatwick Airport in 2013... That is why they need this false pandemic...
3 hours ago