Department of Homeland SSecurity Freaks Out Seniors and the Disabled

It may have looked like they were ready for war or some deranged person looking for his late Social Security benefits.

But it was only Federal Protective Service officers with the U.S. Department of Homeland Security who were conducting a random training operation early Tuesday morning when they surprisingly showed up at the Social Security Administration office in downtown Leesburg.

With their blue and white SUVs circled around the Main Street office, at least one official was posted on the door with a semiautomatic rifle, randomly checking identifications. And other officers, some with K-9s, sifted through the building.

"I thought someone was upset about not getting there check," said Laura Kelly, who took a friend to the office on Tuesday. 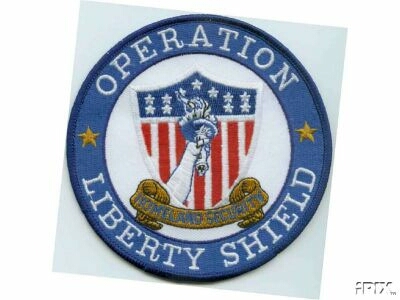 According to one Homeland official in the Washington, D.C. office, Operation Shield. is an effort that uses routine, unannounced visits by FPS inspectors to test the effectiveness of contract guards, or protective security officers -- "detecting the presence of unauthorized persons and potentially disruptive or dangerous activities."

Part of the U.S. Department of Homeland Security, FPS is the federal law enforcement agency that provides integrated security and law enforcement services to over 9,000 federally-owned and leased buildings, facilities, properties and other assets.

Officers on the scene would not speak to the press and by noon they were gone. But Thomas Milligan, district manager for the Social Security Administration office, said while the visit came as a surprise, the office was ready. He added the officers checked videos, security measures, alarm system and more.
"It was to make sure security measures are in place and properly followed," Milligan said.

More accurately, a recolonization to the Rothschild bank/ Britain alliance and total removal of most civil rights and freedom of religion. If they succeed, your chances of ever owning a home or getting a college education will be greatly reduced, since all Americans are considered competing bloodlines to the throne. Your self-indulgent neighbors who do not care one iota because their tiny brains are overloaded will get the breaks and be considered the new elite. Al Gore, head of the 'Global Warming' B.S. took one science class in college. It was called 'natural science and Al got a 'D'. There is the New World Order 'elite'. Stupid appeals to most voters, and the past 4 presidents have been organized crime participants and have worked under the George H.W. Bush Skull and Bones authority, which has been loyal to the German blooded royal family for over 300 years.

We must get our country back. Kill your CFRtv.

Did anyone else take affiance to the name to the name Bush chose for the federal death squad "Homeland Security Force " is sounded very reminiscent to Hitlers "Fatherland Security force" is this why he chose the name?

The United States is becoming more and more like Germany was in the late 1930s. It sickens me. I grew up during the Eisenhower years, remember the Red Scare and the subsequent humbling of Joe McCarthy, the Cold War, the Civil Defense exercises in schools, and so on.  Eisenhower warned us of the growth of the Military-Industrial Complex and no one paid any attention. The War Machine has gotten so big that 53% of all Federal Dollars are spent on the military. It's no wonder We The People are suffering. This country spends more money on the military than all other nations COMBINED. The banksters and the corporations control everything, all with the intent of gaining more profits and the US will become a Third World country. It's happening right now. I think the Occupy movement has it right, the only thing we can do now is to throw our bodies in front of the Machine and hope that we can clog up the gears.

In Response to Don Cordell, He's exactly right. We aren't the ones who need therapy and I'm not saying this laughlying. In all seriousness the people who work in homeland are not mentally well. I believe they all sufferred horrible abuses and that like attracts like. We are all non-gov employees blogging together (like attracts like).

I believe the nsa,cia (like attracts like) are not well in their mind and after watching a youtube of  an ex-former cia, he believes 95% of the persons in congress should be impeached.

Also, I'm a victim of the satellite attacks (daily...the send synthesized malaria at me, and many others - i have gone deep into my spiritual healing and am intuitive...the radiation for the satellites, all day long has been horrible and I've had to hire a profound healer for the last 3 years daily to keep the attacks at bay on my health..it's the nsa,cia...they don't like metaphysical or healers because we don't go to md's and use the system of the ama..so since I'm not their kind of supporter and feeding the money into it...they don't like me..they dn't like themselves and they are greedy, but that's another topic).

With the many many many BRILLIANT machines, time machines, satellites, area 51, hoards of drone technology...you're telling me we can't heal the world over about 100 times? Haarp which they use to generate earthquakes and kill people (depopulation....each person in congress, cia,nsa,fbi needs to be in the fema camps, not us). They are very ill people. I'm telling you. Like attracts like.

Big question for the people of the United States that are well are:

What do you want for our country?

using that billions of dollars of technical equipment that 28,000 people in the pentagon have access too.

or people that are mentally well using the billions of dollars of equipment in Area 51.

We're talking, Our country has Trillions of dollars of equipment being used by people that are mentally

not well. Trillions. Now imagine, you put people that are Well in charge of all of that. Then ask yourself,

do you want high speed rails connecting all the major cities in the U.S. ? - I say Yes, I want that.

Social Security not mixed in with the military budget (hell, military equipment is like my refridgerator...lots of equipment paid for but goes to waste - hence the reason we're in debt 14 trillion dollars).

Haarp used as a humougous Peace energy generation (they talked about this on Red Ice Creations was a very good article) instead of an earthquake weapon...again...we need a Mentally Well person running it, not an illuminati person who worships satan.

What else do we want for America? - No More Chemtrails

Any religion is ok with me as long as it's not Satan worship and doesn't meditate on killing people.

Stanford, Harvard, Mit are all in on the Military Artificial Human Cloning Remote full body-mind control system where they can attach through ether, to your "dna" sound wave and control you and I'm not joking.

It has literally been in development for over 50 years.

Disclosure of ALL money that the government has given to MIT, Harvard and Stanford for ANY project should be brought to light.....It's our money. They're using it for murder.

I believe, the human cloning control program, controls the individuals that they watch, gets them to go to mit, harvard or stanford and then maximizes what ever they can to see what the individual can create for the government. they're trying to create/clone top humans to have an even more top human made by a machine to create armies to take over people. I fully believe the men and women in the army have the cloning/control program already on them and they're contr

I bet those 'Home-Land-So-Called-'security'-boyz were just glad the real 'American' Citizens of these united States weren't 'engaged' and 'playing' along with them. Now, ain't that the truth.

This is all part of slave training.  Big job in America where we actually thought we were citizens.

What if a senior citizen in that office saw those DHS thugs with their semiautomatics and had suffered a heart attack? Would they be charged with the death like most criminals are when they induce a heart attack in their victims?

This is practice for when the economy collapses and terrorists / rioters hit the SS buildings in rage for not receiving checks or benefits.

Wow, and they even printed a widdle patch for the 'tacticool' thugs on steroids - It's should read 'Operation Liberty Shaft'.

The One replied to Parrhesia's discussion Highland Park Illinois Parade Shooter
"When you are Right, are Right…"
2 hours ago

"It is funny seeing them accuse each other of the typical "go to" liberal insults. …"
5 hours ago

"Garbage being garbage, hopefully the great starvation will get rid of most of them "
5 hours ago