Why bother even reading the news? We could just make it up according to what we already know about how the world works, and it would still turn out to be true more than 75% of the time. I'm guessing by her saying she could see the "bullets", she means the ejected cartridges. Mike Adams said he had seen other local news broadcasts where witnesses were interviewed, and this was not the only one who said there were more than one shooter. He also noted that the shooter wore eye and ear protection, even though it seemed like a suicide mission.

In addition, the shooter's MyLife page (the site is described as like a Wikipedia page on everyone), his political affiliation was changed from Democrat to Republican, his religion was changed from atheist to Christian, shortly after the shooting. There are extant screen shots.

I can't argue with the manifesto, though. You may have to download the image and expand it to read it, or find it elsewhere. - 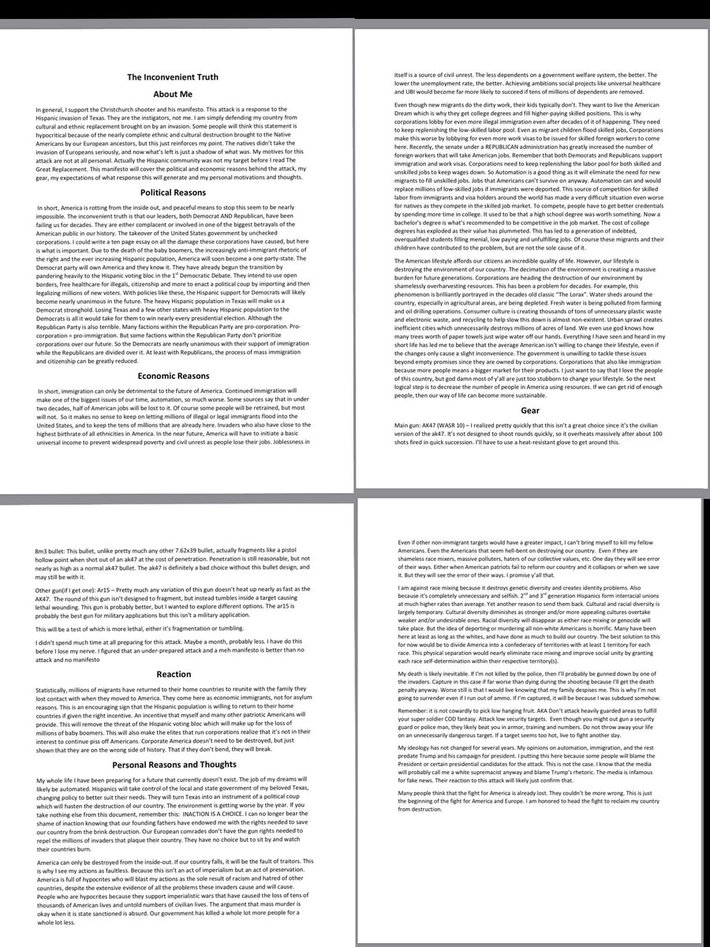 same story it always goes back to just one shooter.

Some of you might’ve read the @Cloudflare news already. They're dropping 8chan. https://t.co/FQJrv9wzvn
There might be some downtime in the next 24-48 hours while we find a solution (that includes our email so timely compliance with law enforcement requests may be affected).

"John Crusius does not say so in the posting, but he is a mental health counselor"

The shooter's dad is a mental health counselor, yet didn't notice signs that his son was mentally unbalanced enough to go open fire on a bunch of people.  Nothing suspicious there.


"Eleven months before his son was arrested for allegedly murdering 20 people and injuring scores more with an assault rifle in El Paso, Texas, John Bryan Crusius started a GoFundMe page for a musician suffering the consequences of gun violence long after being shot by a stranger who appeared at his door.

The page included a photo of a critically wounded Eric Keyes lying on a hospital gurney. John Crusius wrote that Keyes had been struck by an “overwhelming series of traumatic events,” Crusius reported: “A mentally ill person showed up unannounced at Eric’s door in Denton, TX and told Eric he was a fan of his music. He pulled a gun and shot Eric from short range, the bullet piercing his chest and breaking three ribs, missing his heart by one millimeter, and finally lodged in his left arm. He suffered a collapsed lung (could not sing anymore) and nerve damage that extended to his left arm (could not play guitar).”

"John Crusius does not say so in the posting, but he is a mental health counselor. The Veterans Administration had referred Keyes to Crusius’ clinic in Richardson, Texas for help with PTSD such as an ever growing number of American civilians suffer after being shot. Keyes needs only to hear a doorbell ring and he flashes back to the shooting. The gunman was later said by police to believe Keyes had sexually assaulted a woman eight years before. Keyes had been arrested for a sexual assault, but the charges had been dropped. Keyes only says that his assailant was deranged." Quotes from The Daily Beast:

MK Ultra looks to be a part of this story.

If this was about the Hispanic invasion, why did he go all the way to El Paso when he could have found plenty to shoot much closer to home?  They say he was from Plano.  Secondly, why not go to a Hispanic market?  I think only 3-4 of his victims were Hispanic.  This really doesn't make sense.

Then there's the witnesses who said there were 3-4 men in black shooting.  The suspect is wearing khaki pants.

luggnutz commented on Doc Vega's blog post Why Are We Not Hearing More About the La Palma Volcano?
"Revelation 8: 8 And the second angel sounded, and as it were a great mountain burning with fire was…"
4 hours ago

"Video of the worm https://youtube.com/shorts/oEDqnzBfLV8?feature=share"
5 hours ago

"A video YouTube calls a 'short', can't be uploaded as a video here. A vril worm my…"
13 hours ago

☀️Look Your Best in 2021 With Ageless Glow: ☀️ http://www.glowwithrissflex.com Get up to $30 OFF & FREE SHIPPING When Your Order Today!! US TROOPS DEPLOY TO ...
yesterday
0 Comments 0 Favorites