Lindsey Graham, the perennial career politician, swamp thing and faggot, of course is involved.  They should be dragged behind trucks (with Confederate flag bumper stickers) until all that is left is their malodorous feet. Literally. Until then, they will merrily betray us. With great greed, and satanic, traitorous disregard. 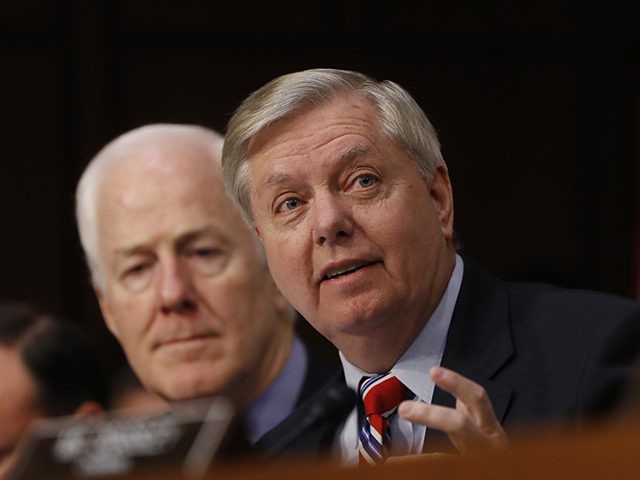 Nine Republican senators are lobbying President Trump to import more foreign workers, claiming there are not enough qualified Americans to take jobs, even with more than 36 million out of work.

Specifically, the GOP senators say Trump must continue fast-tracking H-2A foreign agricultural workers and H-2B foreign nonagricultural workers into the U.S. and should allow businesses to exempt themselves from foreign worker restrictions so long as they claim they cannot find Americans to hire.

The marked impact that the coronavirus has had on the job market is undeniable. Nearly 33 million Americans are unemployed, and close to eight million American small businesses are at risk of shuttering forever. Some of these struggling small businesses rely on labor that many Americans may not be qualified or able to perform, even in the aftermath of the pandemic, and some of these businesses operate in industry sectors that are not experiencing high unemployment … or in particular geographical locations where qualified labor is scarce. American businesses that rely on help from these visa programs should not be forced to close without serious consideration. Guest workers are needed to boost American business, not take American jobs. [Emphasis added]

Due to the temporary and seasonal nature of the work, it is exeedingly difficult to find American workers, even now, who wish to work only on a temporary basis. Many of the jobs lost since March are not temporary or seasonal. Much of the furloughed or laid off workforce are likely looking to return to the jobs they were forced to leave … we are afraid the unemployment insurance compensation included in the CARES Act has created a disincentive for many American furloughed or laid off workers from finding new jobs, especially those seasonal or temporary in nature. [Emphasis added]

For some time, the H-2B visa program has been used by businesses to bring in cheaper foreign workers and has contributed to blue-collar Americans having their wages undercut.

Phyllis Maka commented on Phyllis Maka's blog post YES! KICK EM OFF EARTH--NO OTHER WAY! THEY ARE LITERALLY THE COVID PARASITES!
"Jim Stone -  They are accelerating the shutdown of alt media sites. Just because you can…"
52 minutes ago

Mr. Sizzle commented on Phyllis Maka's blog post YES! KICK EM OFF EARTH--NO OTHER WAY! THEY ARE LITERALLY THE COVID PARASITES!
"Hey Phyliss.  Let’s make a bunch of shirts that say, “It’s ok to like Jim…"
1 hour ago

Phyllis Maka commented on Phyllis Maka's blog post YES! KICK EM OFF EARTH--NO OTHER WAY! THEY ARE LITERALLY THE COVID PARASITES!
"Yesss Local gun shop owners need to be deputised also, see how that sticks up their graw!"
2 hours ago

Mr. Sizzle commented on Phyllis Maka's blog post YES! KICK EM OFF EARTH--NO OTHER WAY! THEY ARE LITERALLY THE COVID PARASITES!
"Well it turns out a local gun shop is offering them a FREE…"
3 hours ago