How $21 Trillion in U.S. Tax Money Disappeared. “Full Scope Audit” of the Pentagon.

How $21 Trillion in U.S. Tax Money Disappeared. “Full Scope Audit” of the Pentagon

This is part of our series on the unaccounted for $21 Trillion in taxpayer money. As unbelievable and absurd as that sounds, the actual total of unaccounted for money at the Pentagon is most likely significantly more than $21 trillion. The First ever “full-scope audit” of the Pentagon is presently underway. Read the first report from this series here. 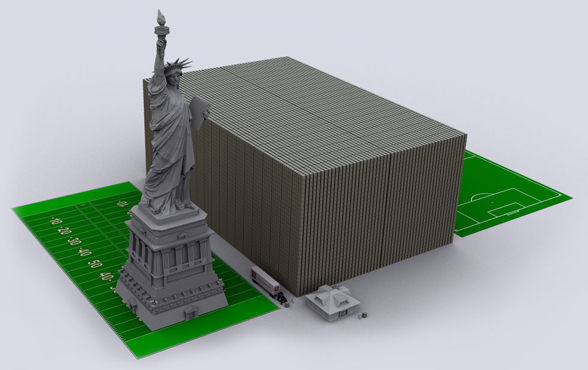 According to the Department of Defense Inspector General and the Defense Finance and Accounting Service, $21 Trillion in Taxpayer Funding Is Unaccounted For.

To help people comprehend the scale of this, $1 Trillion is $1000 Billion. This means that $21,000 Billion in taxpayer money has gone missing.

Image: a stack of one trillion dollars. Multiply that by 21

How can this be possible?

We outlined the “Unaccountable System of Global War Profiteers” in detail here.

For further understanding, we are featuring another mind-blowing Department of Defense Inspector General (DOD IG) report.

The following are highlights from the DOD IG “Summary of DOD Office of the Inspector General Audits of Financial Management”:

Pentagon Cannot Account For $6.5 Trillion Dollars
It gets worse; overall:

It is as if the accountability and appropriations clauses of the U.S. Constitution were just window dressing, behind which this mind-numbing malfeasance thrives.

Technically, this is a violation of the Anti-Deficiency Act, a statute carrying felony sanctions of fines and imprisonment.

Congress and the Pentagon annually report and hold hearings on DOD’s lack of financial accountability and sometimes enact new laws, but many of the new laws simply permit the Pentagon to ignore the previous ones; others are eyewash.

If you have a system that does not accurately know what its spending history is, and does not know what it is now (and does not care to redress the matter), how can you expect it to make a competent, honest estimate of future costs?

It is self-evident that an operation that tolerates inaccurate, unverifiable data cannot be soundly managed; it exempts itself from any reasonable standard of efficiency.

Recall, also that the errors in cost, schedule and performance that result are not random: actual costs always turn out to be much higher than, sometimes even multiples of, early estimates; the schedule is always optimistic, and the performance is always inflated.

The Pentagon, defense industry and their congressional operatives want – need – to increase the money flow into the system to pretend to improve it.

Supported by a psychology of excessive secrecy, generated fear and the ideological belief that there is no alternative to high cost, high complexity weapons, higher budgets are easier to justify, especially if no one can sort out how the Pentagon actually spends its money.

The key to the DOD spending problem is to initiate financial accountability. No failed system can be understood or fixed if it cannot be accurately measured.

And yet, there is no sense of urgency in the Pentagon to do anything about it.

The question must be asked: if nothing has been done by the Pentagon to end the accountability problem after more than 20 years of promises, is top management simply incompetent, or is this the intended result of obfuscation to avert accountability?

A spending system that effectively audits its weapon programs and offices would also be one that systemically uncovers incompetent and crooked managers, false promises and those who made them.

It would also necessarily reveal reasons to dramatically alter, if not cease, funding for some programs, which of course would make lots of people in industry, Congress, and the executive branch unhappy.

The current system and its out of control finances mortally harm our defenses, defraud taxpayers, and bloat the Pentagon and federal budgets.

Any reform that fails to address this most fundamental problem is merely another doomed attempt that will only serve to perpetuate a system that thrives on falsehoods and deception.

William Hartung, Director of the Arms and Security Project at the Center for International Policy, summed up the accountability crisis at the Pentagon by saying:

“Call it irony or call it symptomatic of the department’s way of life, but an analysis by the Project on Government Oversight notes the Pentagon has so far spent roughly $6 billion on ‘fixing’ the audit problem — with no solution in sight.

If anything, the Defense Department’s accounting practices have been getting worse.”

The above post was an excerpt from The Pentagon Labyrinth, 10 Short Essays to Help You Through It. It was written by, “10 Pentagon Insiders, Retired Military Officers and Specialists With Over 400 Years of Defense Experience.” The section we featured is from Essay #8, Decoding the Defense Budget: The Ultimate in Cooked Numbers, by Winslow T. Wheeler. * Report Full PDF Here *

This article was originally published on Changemaker.media.